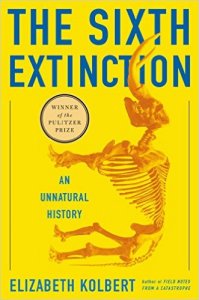 This book won the Pulitzer Prize for Nonfiction (and was a finalist for the National Book Critics Circle Award). I finally got around to it on my plane flight back east a month ago. The title refers to five prominent mass extinctions that have occurred throughout the history of the Earth, as evidenced by the fossil record (there’s a graph on p16), the fifth of which was the event 65 million years ago that wiped out the dinosaurs. The book focuses what seems to be going on right now (i.e. over the past couple hundred thousand years, but especially *right now* this century) – a sixth mass extinction, caused by the successful dominance of our planet by the human race.

Each of the book’s thirteen chapters focuses (sometimes incidentally) on a particular species that’s already gone extinct or that’s threatened, describing each with a combination of historical perspective and personal narrative – the author’s visits and interviews with scientists working in the field — and knits them together with an overarching narrative thread that sketches out the history of the human race, and the history of our ideas about other species and how we affect them.

The book starts strikingly in its first three pages with a thumbnail account of humanity’s spread across the globe and impact on the planet, starting in a slice of eastern Africa…

The members of the species are not particularly swift or strong or fertile. They are, however, singularly resourceful. Gradually they push into regions with different climates, different predators, and different prey. None of the usual constraints of habitat or geography seem to check them. They cross rivers, plateaus, mountain ranges.

The process continues, in fits and starts, for thousands of years, until the species, no longer so new, has spread to practically every corner of the globe. At this point, several things happen more or less at once that allow Homo sapiens, as it has come to call itself, to reproduce at an unprecedented rate. In a single century the population doubles; then it doubles again, and then again. Vast forests are razed. Human do this deliberately, in order to feed themselves. Less deliberately, they shift organisms from one continent to another, reassembling the biosphere.

Meanwhile, an even stranger and more radical transformation is under way. Having discovered subterranean reserves of energy, humans begin to change the composition of the atmosphere. This, in turn, alters the climate and the chemistry of the oceans. Some plants and animals adjust by moving. They climb mountains and migrate toward the poles. But a great many – at first hundreds, then thousands, and finally perhaps millions – find themselves marooned. Extinction rates soar, and the texture of life change.

I like the conciseness and sweep of this account: e.g. doubles again, and then again. In the perspective of the history of life on Earth, all of this has happened in a flash.

The first chapter highlights an effect that has occurred just in the past century: the advent of airplane flight around the globe has, inadvertently, allowed species to come into contact that had previously been completely isolated. The case study is how species of frogs in Central America have disappeared, victims of a fungus spread by humans.

The second chapter, ostensibly about the American mastodon, is a historical sketch of how the very idea that species could go extinct did not arise until a couple centuries ago. Until then, the discoveries in the 1700s of the skeletons of huge animals (e.g.) that had never been seen alive was passed off as due to the many areas of the planet that had not yet been explored. Cuvier in France, around 1800, was the first to suggest that species had become extinct. Ironically, he opposed the idea of evolution, or transformisme in French [this was before Darwin, but the idea was in the air].

The next few chapters advance the historical context: the ebb and flow between ideas of catastrophes or uniform trends throughout the Earth’s history. Darwin applies Lyell’s ideas to animal species in his ideas of natural selection. Both ideas were correct. The idea of a meteor impact on Earth that triggered the extinction of the dinosaurs, first put forth about 1980, was ridiculed at first, until mounting evidence supported it.

However earlier extinction events had their own causes, some variations of climate change.

Currently the idea we are living in the Anthropocene epoch – successor to the Holocene – that, as subsequent chapters explore, may have begun hundreds of thousands of years ago, as humans moved out of Africa, spread across the globe, and killed off the numerous large animal species that had survived the last ice age (many examples). This trend accelerated in the past century as our airline flights have inadvertently mixed previously isolated species around the globe together again, leading to deaths of many species of frogs and bats, and most recently to the effects of climate change, which already portend the deaths of coral reefs and other ocean ecosystems, while humanity’s spread across the globe is leading to the imminent extinctions of large mammals like rhinos, elephants, and our fellow large primates in Africa.

In a chapter about the Neanderthal, and the possible DNA analysis of how our species differed from theirs, author quotes a scientist with the idea that humanity has a sort of ‘madness’ gene that led us to seek out and explore.

It’s only fully modern humans who start this thing of venturing out on the ocean where you don’t see land. Part of that is technology, of course; you have to have ships to do it. But there is also, I like to think or say, some madness there. You know? How many people must have sailed out and vanished on the Pacific before you found Easter Island? I mean, it’s ridiculous. Any why do you do that? Is it for the glory? For immortality? For curiosity? And now we go to Mars. We never stop.

And at the end the author summarizes and philosophizes:

What I’ve been trying to do is trace an extinction event – call it the Holocene extinction, or the Anthropocene extinction, or, if you prefer the sound of it, the Sixth Extinction – and to place this event in the broader context of life’s history. That history is neither strictly uniformitarian nor catastrophic; rather, it is a hybrid of the two. What this history reveals, in its ups and downs, is that life is extremely resilient but not infinitely so.

She describes an exhibit at the American Museum of Natural History of all six big extinctions. And asks, will we be the victim of our own extinction event? Or might our species have the cleverness to prevail, via atmosphere re-engineering, or even relocation to other planets? P268b:

Right now, in the amazing moment that to us counts as the present, we are deciding, without quite meaning to, which evolutionary pathways will remain open and which will be forever closed. No other creature has ever managed this, and it will, unfortunately, be our most enduring legacy.