Lewis Thomas, The Lives of a Cell 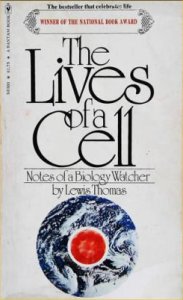 Lewis Thomas was a pediatrician and doctor, who became president of the Memorial Sloan-Kettering Cancer Center in New York, and who wrote a series of short essays which were first published in New England Journal of Medicine in the early to mid 1970s.

His first book, The Lives of a Cell, was a collection of some 30 of these essays. (I don’t have the original first edition hardcover; I have the first 1975 Bantam paperback reprint, imaged here.) It won a National Book Award. The essays mix detailed understanding of the intricacies of the biological world with profound insights about the position of humans amidst that biological world.

Here are the first two paragraphs of the opening, title, essay:

We are told that the trouble with Modern Man is that he has been trying to detach himself from nature. He sits in the topmost tiers of polymer, glass, and steel, dangling his pulsing legs, surveying at a distance the writhing life of the planet. In this scenario, Man comes on as a stupendous lethal force, and the earth is pictured as something delicate, like rising bubbles at the surface of a country pond, or flights of fragile birds.

But it is illusion to think that there is anything fragile about the life of the earth; surely this is the toughest membrane imaginable in the universe, opaque to probability, impermeable to death. We are the delicate part, transient and vulnerable as cilia. Nor is it a new thing for man to invent an existence that he imagines to be above the rest of life; this has been his most consistent intellectual exertion down the millennia. As illusion, it has never worked out to his satisfaction in the past, any more than it does today. Man is embedded in nature.

Thomas went on to publish at least two more books of similar essays, including Late Night Thoughts on Listening to Mahler’s Ninth Symphony, which I need to revisit, and two or three additional books. He died in 1993.