Pinker, Steven. Rationality: What It Is, Why It Seems Scarce, Why It Matters. Viking, 2021 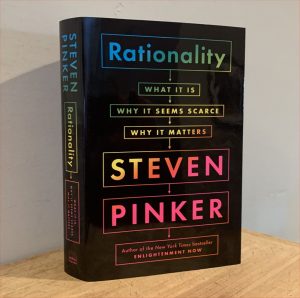 I realize I’ve never written up a book by Steven Pinker on this blog, though I’ve read several and I think Pinker is one of the very best scientist/writers around (along with, say, Dawkins and Wilson). His themes are often profound, his writing sparkles, and his illustrations are colorful. But his books tend to be long, and detailed, and so my notes are long, and thus difficult to boil down into any kind of readable blog post.

The current book may be an exception, because it easily parses into a half dozen related themes, along which I can summarize my notes. By my count there are now eight big Pinker books aimed at general audiences, and another four that seem aimed more at specialists in his fields of psychology and linguistics. Of the eight, I’ve read five, and have notes on four. So let’s start with this latest one first, a book just published three months ago.

Summary: The book breaks down in four parts, the longest covering 7 chapters:

Pinker says he wrote the book as a one-stop-shopping for information about rational thinking and the reasons people have problems with it. In that he likely succeeds, but at the same time much of the material is familiar. The opening chapters are good, especially for insights about when being irrational can be strategic, and how working out conflicting goals is the basis for wisdom and morality.

The key chapter, Chapter 10, attempts to explain our modern situation, and he makes some excellent points about how our “cognitive facilities work well in some environments and for some purposes but go awry when applied at scale, in novel circumstances, or in the service of other goals. The idea of motivated reasoning and myside bias are familiar; less so the ideas that humans don’t “believe” different things differently, and that many people resent that science has “disenchanted” world. But does all this really explain the current situation, in which the dumb half of the country is ready to go to Civil War? I’m skeptical.

Note how often Hume and Tversky & Kahneman are given credit for many of these ideas.

This entry was posted in Book Notes, Steven Pinker. Bookmark the permalink.