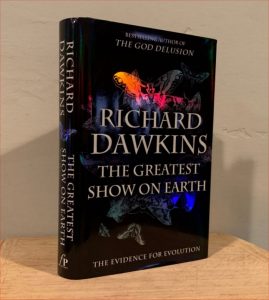 This is the second book to appear in 2009 that set out to present the basic evidence for biological evolution. I covered the other one, Jerry Coyne’s Why Evolution is True, yesterday, and it occurred to me to wonder which book came first and if one of the author’s might have influenced the other.

So they had each read each other’s book by the time each was published. But my understanding of the publishing world is that it typically takes a full year from the time a manuscript is delivered to the publisher before the book actually appears in stores. In the first few months the publishers will circulate preliminary copies (ARCs, advanced reading copies) to sympathetic readers precisely to get feedback they use as blurbs on the cover. But given the lead time involved, I doubt either author could have read the other’s with time to update their own manuscripts. Not that it really matters; and why would they need to?

This was something like Dawkins’ 10th book (Coyne’s was his first), and it’s longer than Coyne’s, some 440 pages of text, with several inserts of color plates along the way, with 30 pages of notes, bibliography, and index. Oh wait—Dawkins does include Coyne’s book in his bibliography. So apparently he did see the book and took it into account, at least enough to credit it.

As with Coyne I’m going to clean up and trim my notes a bit but not substantially rewrite them (They’re only 1/3 the length of Coyne’s.) Then I’ll come back and summarize key points here.

Dawkins spells out in great detail the evidence for the fact of evolution. Dawkins in particular offers evidence to challenge the misconception of creationists. He begins by emphasizing what the words “theory” and “fact” mean in scientific contexts. Then discusses evolution: why the idea took so long to occur, though the idea of “artificial selection” e.g. breeding dogs was well-known; how we date the past; how evolution can occur quickly (e.g. elephants’ tusks); how the idea of “missing links” is a misconception; how a human can arise from a single cell not in a billion years but in nine months; how geographical barriers create new species and explain the distribution of different species around the globe; how our bodies show evidence of vestigal and “unintelligently” designed features; how the ecosystem is terribly designed considered as a whole, and how would creationists explain that?; and finally how Darwin’s worldview, our four kinds of memory, the 2nd law of thermodynamics, and our very existence are consistent with the apparent rarity of life in the cosmos. With an appendix examining acceptance of evolution in various countries — highest in northern Europe, dismal in the US.

Another excellent book, with examination of theoretical ideas and lots of examples of how evolution has and is occurring. Much of it familiar to me already in 2009, but several new points stood out: the idea that a continuum of fossils means that, at some point, the division into species is arbitrary; how DNA is not a blueprint but a set of instructions, refined over millions of years, obeyed locally by individual cells, rather like origami; and how the ecosystem, with its pain and record of history species, is a powerful argument against “intelligent design.”

Ch 3, The Primrose Path to Macro-Evolution

Ch 5, Before Our Very Eyes

Ch 8, You Did It Yourself in Nine Months

Ch 9, The Ark of the Continents

Ch 10, The Tree of Cousinship

Ch 11, History Written All Over Us

Ch 13, There Is Grandeur in this View of Life

The idea that the increasing continuum of fossils means that, at some point, divisions in species is arbitrary.

The insight that DNA is a set of instructions, without any particular intent, but refined over millions of years via accidental changes and the effects of the results of those changes. E.g., DNA might as well be an enormous series of simply instructions: in terms of left right, or one off—and it’s the sequence, as executed within the organism, that creates the physical being, not by way of any ‘design’ or blueprint.

The observation that the ecosystem as a whole is a powerful argument against ‘intelligent design’. Couldn’t a designer have set up something less wasteful and painful?