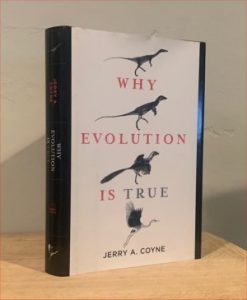 This is another of a dozen or so most significant books that I’ve read over the past decade or more that I’ve put off writing up on this blog simply because my notes were long and so it’s more of a chore than usual to boil them down to a coherent post that anyone might actually read. But I’m finally catching up on these and determined to finish in another few weeks.

This is one of two books that appeared in 2009 (the other by Richard Dawkins) that laid out the varieties of evidence that evolution has in fact occurred, and is not, as detractors claim, “just a theory” or “a theory in crisis.” (The other book by Dawkins obviously has some overlaps with this one, but each of these authors makes some distinct points, too.)

Jerry Coyne was a professor (now retired) at the University of Chicago who realized that “even many of my fellow biologists were unacquainted with the many lines of evidence for evolution” (pp xix – xx). So this book lays out those main lines of evidence, for them, and for the many lay readers who accept evolution but may need talking points to defend themselves.

Coyne (or perhaps his publishers) set up a promotional website for the book, with the same name (https://whyevolutionistrue.com/), where he continues to post, though mostly on social and political issues these days.

The book is about 240 pages of text, with another 50 pages of notes, references, and index.

(Note: I use abbreviations like mya to mean “millions of years ago”)

As usual I didn’t boil down my 6000 words of notes much, though I did refine them; so here is the summary reduced to numbered points:

Coyne outlines the multivarious lines of evidence for the fact of evolution. He discusses the modern theory of evolution and its six components, including the fact of biological evolution (though all the evidence), the idea of natural selection, and so on, the kinds of predictions it can make as a theory, and how evidence for 150 years has repeatedly confirmed those predictions. The lines evidence boil down to

1) the evidence of the fossil record;

2) the evidence of vestiges and atavisms in current biological features that were once useful but are now useless or even harmful;

3) how the distribution of species around the world, how there are different species on different islands and continents, in patterns that show their geographical spread;

4) how the appearance of “design” is explained by natural selection, an idea that still shocks people;

6) how species — populations that don’t interbreed with other groups — arise via reproductive barriers, e.g. separated by mountain ranges, continental drift, etc. ; analogous to how languages evolve; and

7) How evidence for human evolution, once only a speculation by Darwin, has been elaborated and compounded.

And finally he addresses how evolution entails notions of purpose, morality, and meaning, thus frightening conservatives; but genes aren’t destiny, and we make our own purposes through work, family, avocation, contemplating the universe.

Excellent book, for compiling at a high level (unlike so many science books that focus on relative minutia) all the lines of evidence for one of the greatest theories of all time, that explains one of the most revelatory facts of history of all time. I was familiar with much of its ideas, of course, but the idea that species arise from slow geological divisions that separate populations, was new to me.

Ch 1, What Is Evolution?

Ch2, Written in the Rocks

Ch4, The Geography of Life

Ch5, The Engine of Evolution

Ch7, The Origin of Species

The study of evolution can liberate our minds. Human beings may be only one small twig on the vast branching tree of evolution, but we’re a very special animal. As natural selection forged our brains, it opened up for us whole new worlds. We have learned how to improve our lives immeasurably over those of our ancestors, who were plagued with disease, discomfort, and a constant search for food. We can fly above the tallest mountains, dive deep below the sea, and even travel to other planets. We make symphonies, poems, and books to fulfill our aesthetic passions and emotional needs. No other species has accomplished anything remotely similar.

But there is something even more wondrous. We are the one creature to whom natural selection has bequeathed a brain complex enough to comprehend the laws that govern the universe. And we should be proud that we are the only species that has figured out how we came to be.

Personal comments: I’ve always thought the resistance among the religious to evolution is psychological or at least ideological; they do not or cannot admit the evidence and draw rational conclusions.

Rather, they are driven by human vanity. They can’t bear the thought that, in a deep sense, humans are animals, even though, physiologically, the resemblances are obvious. Perhaps an alternative explanation for the resistance is the inability of humans to appreciate the incredibly large spans of time in which, bit by bit, evolutionary changes occur and new species evolve. Or perhaps simply the unwillingness to admit that things do change — the bane of conservatives.