Ls&Cs: Balancing the Left and Right 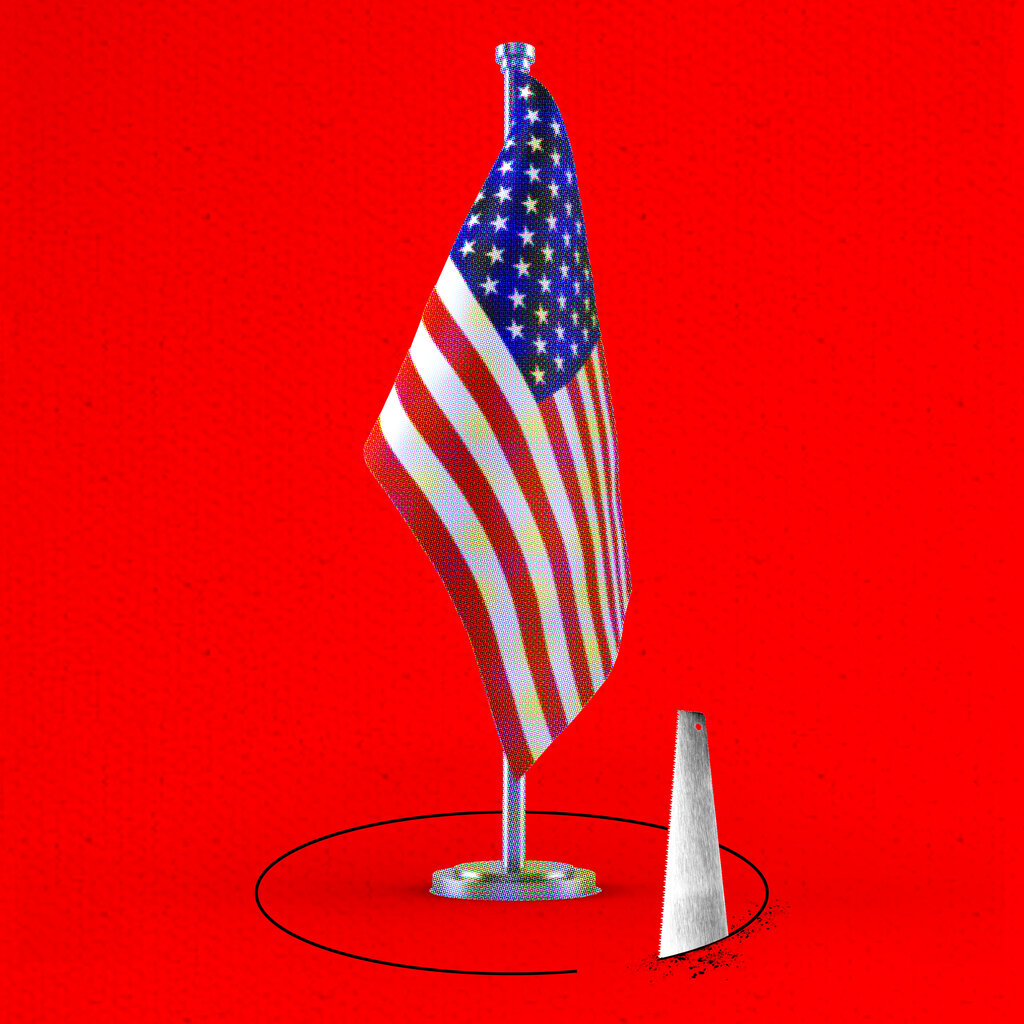 Long, substantial piece. I know Rauch from the book he published last year (2021), not yet read, called The Constitution of Knowledge: A Defense of Truth. Both writers seem to be center-right; they are not apologists for the left.

My curiosity about this piece was to see what they think is “happening on the left.” Cancel culture? Renaming elementary schools and university buildings? Removing Confederate statues? What else exactly, that would justify the violent storming of the Capitol and the attempted overturn of the 2020 election? Let’s see.

Again and again, we have heard conservatives argue that even if you believe that Donald Trump is flawed and the MAGA movement is worrisome, the left is much more dangerous. We disagree. Fears about the left’s increasingly authoritarian, radical tendencies are well grounded; but they have blinded many conservatives to the greater danger posed by the right, which we believe is a threat to our constitutional order and therefore to conservatism itself.

They claim that since the Reagan years–

the left has grown more radical, more aggressive and less tolerant. … Progressives are “often imposing illiberal speech norms on schools, companies and cultural institutions,” the liberal journalist Jonathan Chait writes. There have been many examples of squelching arguments that although controversial deserve full and frank airing in a free society. Universities have attempted to kick off their campuses Christian ministries that require their leaders to be Christian, and we have written in these pages about efforts to weaken protections for religious liberty.

Structural racism — the perpetuation of de facto discrimination by ingrained social arrangements and assumptions — is a reality in American life. But the hodgepodge of ideas in the bucket that has come to be known as “critical race theory” includes radical claims that deny the enduring value of concepts like equality of opportunity and objectivity and reject “the traditions of liberalism and meritocracy” as “a vehicle for self-interest, power, and privilege.” The most extreme versions of these ideas might not be taught in high schools (yet), but their influence is undoubtedly being felt.

The progressive movement, then, is increasingly under the sway of a totalistic, unfalsifiable and revolutionary ideology that rejects fundamental liberal values like pluralism and free inquiry. …

Really? Religious liberty? From my POV it seems to mean intolerance for anyone not of one’s own religion, a refusal to get along with people unlike oneself, and desired exemption from the civil rights and obligations that the rest of the society has agreed to follow, by Constitution and law.

Critical race theory? I doubt people think it through that deeply. Mostly it’s an unwillingness to admit anything bad, even hundreds of years ago, about American history, since conservatives insist that America is the greatest nation in the world and can do no wrong. (Or at least, don’t tell the children.)

Are these trends really so insidious? Or is it just that cultural norms are shifting in recent decades and and racism and bigotry and hostility toward non-Christians is no longer as fashionable as it once was?

In any case– the essay goes on.

Yet even granting all that, the threat from the illiberal right is more immediate and more dangerous. If that wasn’t clear before the last presidential election and the violent attack on the U.S. Capitol on Jan. 6, 2021, it should be clear now.

Any account of the malignancy of the American right has to begin with Mr. Trump, whose twisted sensibilities continue to define the Republican Party. It was he who attempted what no president had ever tried: overturning an election. He based his effort on a huge campaign of disinformation. Mr. Trump pressured the vice president, governors, secretaries of state, election officials and appointees at the Department of Justice to join him in his efforts. One of his lawyers reportedly proposed a plan to nullify the election. Congress’s Jan. 6 committee will reveal more and possibly worse.

The Republican Party, rather than spurning Mr. Trump and his efforts, has embraced them. Around the country, prospective Republican candidates, far from opposing #StopTheSteal lies and conspiracy theories, are running on them in 2022, according to a Washington Post tally. Any prominent Republican today who disputes #StopTheSteal can expect to be targeted by the base, booed at any large gathering of Republicans, censured by party apparatchiks and possibly threatened with physical violence.

And the writers go on.

But assume that your threat assessment is different from ours; that as a conservative Republican you believe the danger to the nation is greater from the far left than from the MAGA right. You should still speak out against what is happening to your movement and your party for two reasons: The sins of the left do not excuse the sins of the right; and what is happening on the right is wrecking authentic conservatism in ways the left never could.

…[The founders] designed the U.S. Constitution, and its attendant institutions and norms, both to constrain us and to help us be our better selves. The MAGA right has no love for those institutions and norms. It inflames ugly passions and warps reality. It is profoundly anticonservative, capable of twisting in any direction for the sake of raw power. It represents a profound break with the American conservative tradition.

I don’t approve of everything on the left; I especially disapprove of “cancel culture” because, where would it end? Won’t we all be cancelled by future generations with changing values? And, judging from posts by Jerry Coyne, university culture is headed in similar directions, to the point of imposing “woke”ness on academic disciplines that should be independent of supposedly objective topics like the sciences, or math.

My baseline antipathy toward conservatism is that its followers so reliably line up on the wrong side of issues that matter, both to me and to the future. They reject science, including those of vaccines and climate change; they are anti-gay and anti-anything other than traditional white Christian family life; they long for an idealized past that never existed; they naively think the US can zip itself off from the rest of the world and sustain itself; they are prey to any number of ludicrous conspiracy theories, including recently the QAnon faction who believes JFK, Jr. will come back to life and retake the White House along with their hero, Donald Trump. And increasingly, seem comfortable with the use of violence to take “back” the government (since they know they can’t win fair elections). (This is just off hand.) They are cultists who want only an authoritarian, near-tyrannical, leader to tell them what to do.

Who, by the way, has no agenda. No problems he thinks need solving; no initiatives he wants the nation to pursue.

Today’s Republicans are for whatever they think can restore them to power. When Senate Minority Leader Mitch McConnell (R-Ky.) was asked on Wednesday what agenda Republicans plan to run on in their bid to regain control of Congress in this year’s midterm elections, he replied: “That is a very good question, and I’ll let you know when we take it back.”

There was also an interview with Trump a week or so ago in which he said the same thing: his agenda for 2024 is to take the House. He couldn’t state any other goals or initiative. (Just as the Republicans had no platform for 2020. Whatever Trump wants, was the implication.)

Of course, the obvious big issue for Republicans is maintaining the status quo, especially for the wealthy, and for white Christians.

Back to Rauch/Wehner for a moment:

And while the progressive left undoubtedly has influence in the Democratic Party, if it exercised the near-total dominance that Republicans claim, Joe Biden would not have won the Democratic nomination. Conservatives certainly have their disagreements with President Biden, but he has not defunded the police, attempted to pack the Supreme Court or promoted the Green New Deal or Medicare for All.

If the Democrats rigged the election and are so radical, why didn’t they put AOC or Elizabeth Warren in the White House? Why didn’t they put Democrats senators in place too, to avoid the recent standoffs? Did they not notice the rest of the ballot? As with so many conspiracy theories, the details, the scope, the implications, render the “stolen election” scenario completely absurd.

This entry was posted in Culture, Politics. Bookmark the permalink.