Subtitled: “Twenty Lessons from the Twentieth Century” and published in February 2017 by Tim Duggan Books.

This is the third book I’ve read or reread recently with a numbered agenda, following the Zakaria book covered in previous post, and Harari’s 21 Lessons for the 21st Century, posted here. 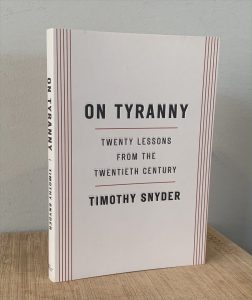 Timothy Snyder came to attention a few weeks back as the author of a highly unfavorable review – discussed in this post, http://www.markrkelly.com/Blog/2022/01/09/ls-a-killer-review/ — of a new book by Jonathan Gottschall, which in passing also criticized an earlier work by Steven Pinker. (Both Pinker and Gottschall responded, pointedly, in letters to the NYTBR where Snyder’s review appeared.)

So who’s Snyder? A prominent historian of the 20th century, apparently, with previous books about the Holocaust, about Hitler and Stalin, and so on. He had a bestseller with the title here, so thin I bought a copy and read it through in a couple hours (taking notes). Like Zakaria’s, Snyder’s is also a timely book, published just a few months after Donald T**** won the election in 2016. Snyder obviously has him and his tendencies in mind as he compiles this brief history of fascism in the 20th century, with advice on how to avoid it.

The book is 126 pages long, and has a preface and 20 chapters, so each chapter is pretty short. Further, each chapter consists of a title, then on the same page a thematic summary in a sentence or two, and then one to 8 or 10 pages of explanatory text with examples.

It would be easy to simply copy the chapter titles and the thematic summaries here, but that would be tantamount to plagiarizing, so I will attempt to boil down both his summaries and texts into one or two lines about each topic, along with my own notes about his texts.

As an example, though, here’s the title and summary of the first chapter:

1, Do not obey in advance

Most of the power of authoritarianism is freely given. In times like these, individuals think ahead about what a more repressive government will want, and then offer themselves without being asked. A citizen who adapted in this way is teaching power what it can do.

Now my summary of the book:

1, Do not obey in advance

4, Take responsibility for the face of the world.

6, Be wary of paramilitaries.

7, Be reflective if you must be armed.

9, Be kind to our language.

16, Learn from peers in other countries.

18, Be calm when the unthinkable arrives.

Both fascism and communism were responses to globalization: to the real and perceived inequalities it created, and the apparent helplessness of the democracies in addressing them. Fascists rejected reason in the name of will, denying objective truth in favor of a glorious myth articulated by leaders who claimed to give voice to the people. They put a face on globalization, arguing that its complex challenges were the result of a conspiracy against the nation. Fascists ruled for a decade or two, leaving behind an intact intellectual legacy that grows more relevant by the day. Communists rules for longer, for nearly seven decades in the Soviet Union, and more than four decades in much of Eastern Europe. They proposed rule by a disciplined party elite with a monopoly on reason that would guide society toward a certain future according to supposed fixed laws of history.

This entry was posted in Book Notes, Politics. Bookmark the permalink.