David Deutsch, THE FABRIC OF REALITY

Subtitled: The Science of Parallel Universes—and Its Implications. Published Aug. 1997 by Allen Lane, Penguin Press. 390pp, of which 24pp are bibliography and index. 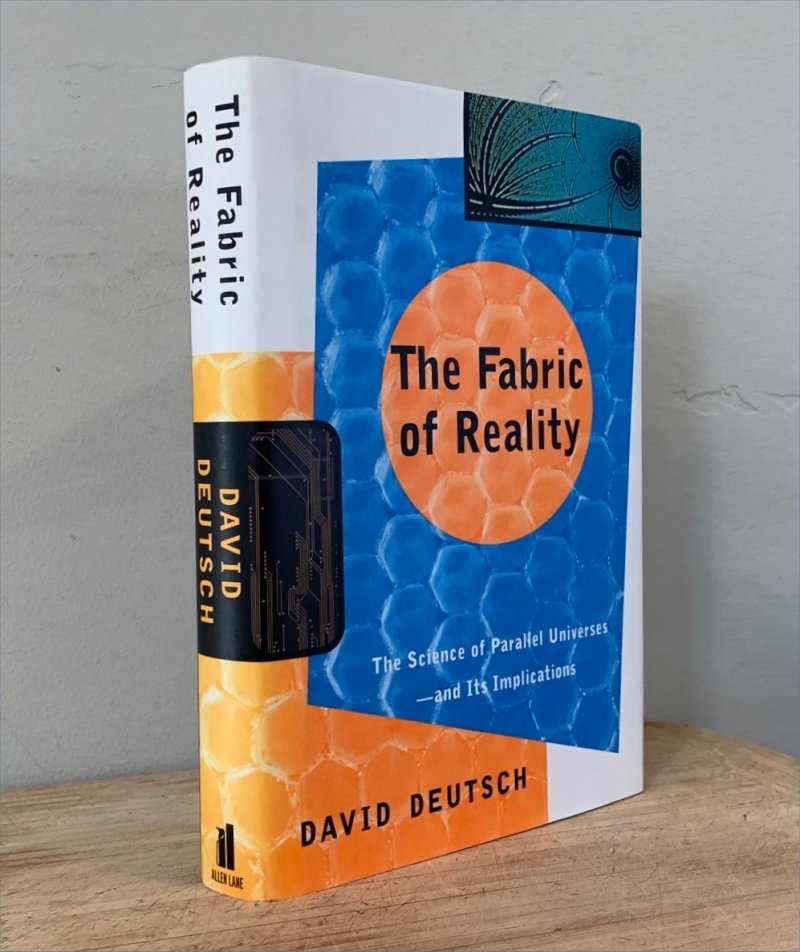 Here is a book that took me a year and a half to read, but was worth the trip. And that’s after it sat on my shelves for almost a quarter of a century! I bought it in a physical bookstore (a chain called Bookstar), though I don’t remember what tempted me to buy it. A review somewhere? Or did it just look like the type of general science book that appealed to me? Perhaps even that of the five blurbs on the back cover, two are by science fiction writers – Douglas Adams and James P. Hogan – and two of the others are by well-known scientists, John Gribbin and Frank Tipler. OTOH, getting endorsements for your popular science book from science fiction writers seems a tad dicey, as if we’re not supposed to take the book entirely seriously… Yet it does seem very serious, and makes some major points.

Deutsch is a scientist noted for this book and one other, THE BEGINNING OF INFINITY (2011), and seems a tad eccentric.

It took me a year and a half because while the book is fascinating, it is abstruse at times to the point that I set it down for a while to read something else. I read the book in three bursts (of a couple weeks each) beginning in Summer 2020 and ending January 2022. I took 5889 words of notes. Fortunately, while there’s lots of detail, the book is quite succinct and profound in its major themes.

If there is a single motivation for the world-view set out in this book, it is that thanks largely to a succession of extraordinary scientific discoveries, we now possess some extremely deep theories about the structure of reality. If we are to understand the world on more than a superficial level, it must be through those theories and through reason, and not through our preconceptions, received opinion or even common sense. Our best theories are not only truer than common sense, they make far more sense than common sense does.

Here are his key points, with some comments from me.

This is a revelatory insight. As author discusses how, at one time (centuries ago, or perhaps in antiquity) it was thought possible for a learned person to know everything that was known, but that has seemed to become impossible with the growth of knowledge, which supposedly now doubles every two years (or something like that). His point is that underlying ideas, all the theories that explain all that knowledge and observations, have in fact converged, or merged, into just a handful of “deep” theories. And all of these can be known. These comprise a “theory of everything,” not in the physics sense (involving fundamental particles and forces), but in a broader sense.

There have long been alternate “interpretations” of quantum mechanical observations, and the author chides most other scientists for resisting the most straightforward of them: that for every QM event that can happen in multiple ways, there truly are alternate universes born into existence for each of those ways. There are thus an infinite number of universes, infinite to a degree we can’t comprehend, new infinities every moment.

This is something of a sidebar claim, following from his personal observations that real science is almost never done in the “traditional” way, i.e. making observations, formulating a hypothesis, then making additional observations to confirm or deny the hypothesis. In real life, a scientist usually has a problem, e.g. an observation or hypothesis that doesn’t align with previous ones, and iterates solutions until some new problem emerges. (He challenges Popper and Kuhn much as Strevens does in his (much later) book, reviewed here.)

This may seem obvious but is in fact profound; if the universe were not physically consistent, its parts and components self-similar – if reality were as capricious and subject to a god’s whimsy as some apparently believe – then science could not exist, and we would not have accumulated the knowledge that we’ve used to build the modern world.

Those are the big take-aways. The book explores those four big theories and shows how they are self-similar and explain each other. I will not further present my notes, exactly, but I will glance through them and note some striking observations or claims.

Page 95, a passage that echoes something I wrote here on my blog a while back:

Every part of the Earth’s surface, on every clear night, for billions of years, has been deluged with evidence about the facts and laws of astronomy. For many other sciences evidence has similarly been on display, to be viewed more clearly in modern times by microscopes and other instruments. Where evidence is not already physically present, we can bring it into existence with devices such as lasers and pierced barriers – devices which it is open to anyone, anywhere and at any time, to build. And the evidence will be the same, regardless of who reveals it. The more fundamental a theory is, the more readily available is the evidence that bears upon it (to those who know how to look), not just on Earth but throughout the multiverse.

Takeaway impression: this book is a prime example of how ‘the universe is unintelligible to you’ and stranger than you can imagine. Humans live by skittered along the surface of a deep, vast, intractable universe.

I’ll try to get the author’s second book in less than another 15 years.

This entry was posted in Book Notes, Evolution, Physics, Science. Bookmark the permalink.