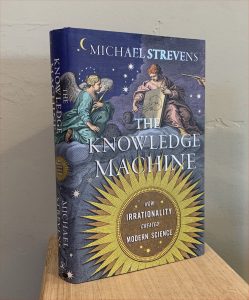 Here’s a book I read a few weeks ago while in the hospital (so my notes on it are sketchier than usual). It was published last October, though I didn’t buy it until February. When I picked it up to read in June, I couldn’t remember why I’d bought it. It’s not by an author I’m already familiar with (in fact this is his first book); even the blurbers on the back cover are not among the usual suspects for books I usually read (though I do know of one, Jim Holt).

Perhaps what had enticed me was the book’s subtitle: “How Irrationality Created Modern Science.” Really, irrationality? Isn’t that counter-intuitive, at best? Science, ideally, is a rational process that considers evidence of the real world, formulates hypotheses, looks for further evidence to confirm or dismiss the hypothesis. How is this irrational?

(Upon investigation, I likely bought it because of this review by Jennifer Szalai in the New York Times Book Review. Most books that I read by authors unknown to me are discovered via NYT or Publishers Weekly reviews.) (I have not reread Szalai’s review since reading the book myself.)

First of all, the “irrationality” invoked by the title is about the way individual, human scientists work. They are as subject to the now-well-known psychological biases as anyone else. They are attracted to certain kinds of explanations based on their religious and philosophical backgrounds. They are subject to motivational thinking; they dig in their heels to defend their pet theories long after others have abandoned them. (A famous observation is that science moves forward as old scientists die.)

That is, Strevens is invoking the same psychological discoveries that have, in recent decades, become well-defined and quantified, by everyone from Jonathan Haidt to Daniel Kahneman. Yet he’s not using their language! He never mentions “motivated thinking.” This is to the book’s credit: the author is not parroting the now received-wisdom of others; he’s approaching the subject of how humans think and reach conclusions from a different perspective, and comes up with matching results.

So what overcomes the biases of individual scientists? What Strevens calls “The Iron Rule of Explanation” (chapter 4), which is “all scientific arguments be settled by empirical testing” (p293); science isn’t about subjective tastes (for “beauty” in theories, for example) or nonempirical considerations (whether a theory fits philosophical, religious, or aesthetic considerations). (Thus, for example, Strevens is dismissive of string theory, because it’s based not on direct evidence, but by the “beauty” and simplicity of its equations that tie together a multitude of physical phenomena.)

Further, Strevens holds that this irrationality on the part of individual sciences is necessary  for the advancement of science, lest science sink into a torpid set of unchallenged conventional wisdoms.

A second big idea in this book (echoed in another couple books I’ve read lately) is to explain why science took so long to emerge. The Greeks had lots of ideas, but not the notion to test them against the real world. Then the Church suppressed scientific thinking for a millennium (except for several centuries in the Arab world). So why Western Europe in the 17th century? Because of a gradual rejection of the Catholic Church and other ancient authority. Because after the Thirty Years War in the mid-17th century, Europe was transformed from cultures aligned by religion, to cultures aligned by nationalism. Which in turn allowed the freedom to explore and experiment and develop explanations that “no longer needed that hypothesis” [Laplace].

In conclusion, Strevens is skeptical of the idea, promulgated by Snow, Gould, and Wilson, that there may eventually be a unification of the humanities and science. (E.g. E.O. Wilson’s CONSILIENCE.) Science, in its purest form, is needed in the 21st century to solve problems. Neither Popper nor Kuhn was quite right (a chunk earlier in the book contrasts their positions). Science needs the ambitions of individual scientists, but it must be caged by the Iron Rule. and it should not be tinkered with to defend string theory or similar idealistic but non-evidentiary notions. Science need not be reined in: it simply needs appropriate interpretation.

(There are several passages I marked to quote, which for now I’ll just note for later reference. 58.7, on how even scientists employ rhetoric and political resources to defend their own ends; 63 and 64, about radical subjectivism; how there is no objective rule for weighing scientific evidence, 79.6 (there are always “auxiliary assumptions” that resemble Kuhn’s paradigms); long discussion of Descartes and Newton, 129ff; about quantum mechanics and superposition, p147ff; how the Iron Rule is deliberately deaf to religious and theological reasons for belief, 204b; how quinarianism (the idea that the world is divided into three, or four, or five realms) gave way to Darwin in the 19th century, with his discovery of the range of variation in the real world; how the Iron Rule makes the distinction between public argument and private thought, p249; how the transformation of ordinary humans into modern scientists is a “morally and intellectually violent process” p255; about scientists who denounce philosophy, 259; and the “effectiveness of scientific thought against the impotence of humanistic thought” (the latter of which considers *all* ways of knowing).

So: a fascinating book worth reading, even I don’t necessarily endorse every one of its ideas. (For example, as someone pointed out – Pinker? Greene? – mathematical ideas pursued for their “beauty” have in fact turned out to describe previously unsuspected aspects of reality.)