I’ve never belonged to any kind of reading club, or ‘book club’ in the sense of a group of people meeting every couple weeks to discuss a book they’ve all read. (A recent example in pop culture is the movie The Jane Austen Book Club, based on the novel by Karen Joy Fowler.) For one, I’ve never been a ‘joiner’ of clubs or groups. (In all the years I lived in Los Angeles, I never once visited LASFS, the Los Angeles Science Fantasy Society, which met weekly at a clubhouse in North Hollywood.) For another, I have lots of books to read on my own, too many to consider interrupting my plans for the agenda of some club or group. 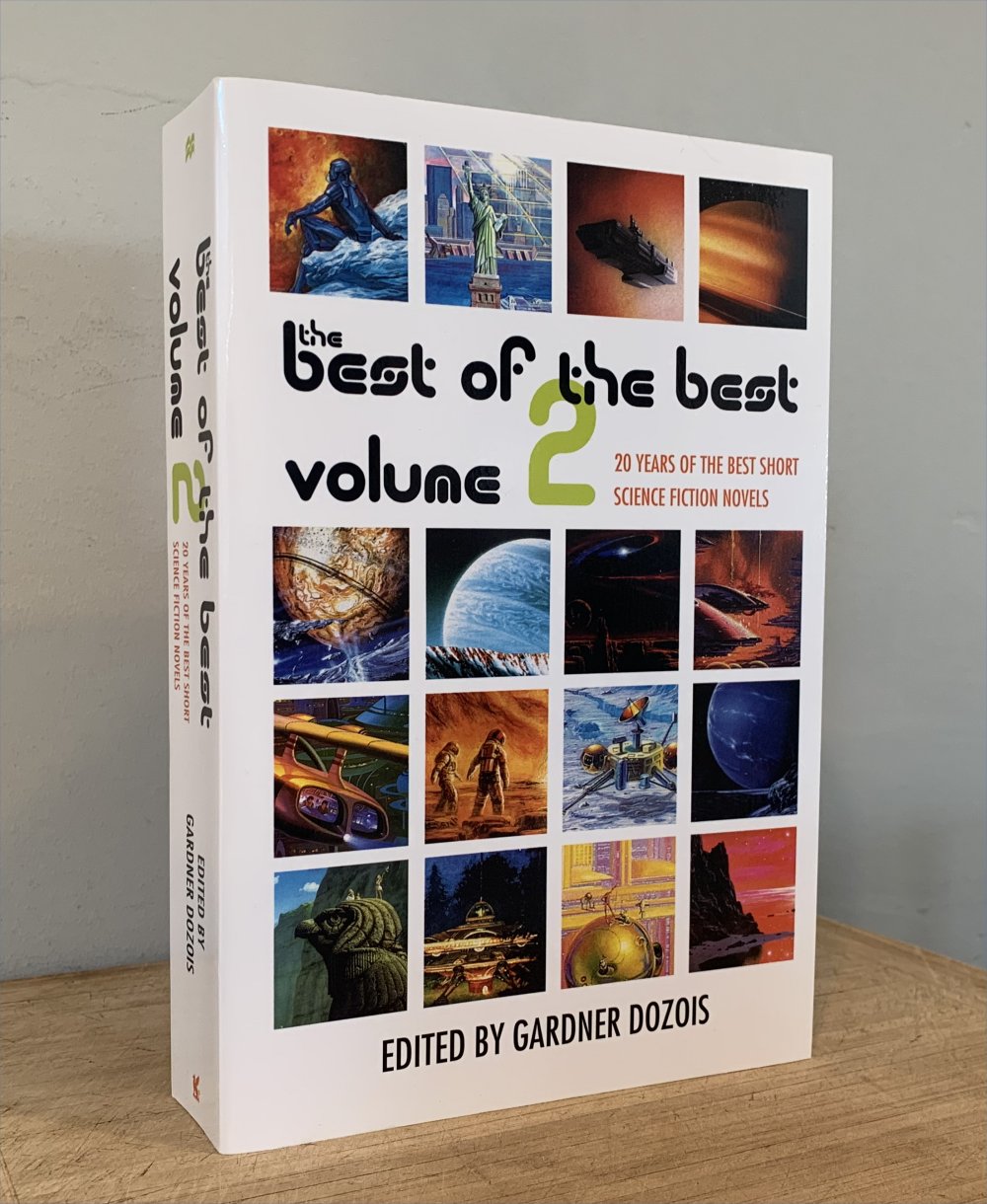 On the other hand, there’s a Facebook group I’ve been following for some time, called “Best Science Fiction and Fantasy Short Fiction.” It has 600+ members (!) even though posting to the group is dominated by a dozen or so, is my impression. The group works typically by selecting an anthology, often a big door-stopper, and working through its contents, with comments for each story solicited every couple of days. Or sometimes they work their way down one of the awards ballots, e.g. all the short fiction titles on this year’s Hugo Ballot, as they’re doing currently.

Recently the group has selected a “door-stopper” anthology edited by Gardner Dozois (SFE entry), one of the great editors and anthologists of the science fiction field (and who died in 2018). Dozois edited an annual “best-of-year” anthology every year for 35 years, and from those he extracted three “best of best” anthologies, of which the group’s current pick is the second. Photo above. This one collects the best “short novels” (more often called novellas) from the first 20 years of that annual series, and because these stories are longer than those in a typical anthology, the Fb group is giving its member a week each to read and comment on each story. Beginning Sunday the 31st. The first story in the book is Robert Silverberg’s 1985 “Sailing to Byzantium.”

I’ve always been partial to short fiction – short stories, novelettes, novellas, short novels, whatever; anything shorter than a novel – and spent some 12 years writing reviews of newly published short fiction for Locus Magazine, from the late 1980s to 2001.

As it happens, the novellas in this Dozois volume were published almost exactly over the span of years I wrote for Locus. That is, I read all of them back then, when first published, and reviewed them in Locus. (Well, except for the last story in the book, published in 2002.) Looking at the table of contents, I think there are only four that I’ve ever reread in the years since they were first published.

Thus I’m attracted to reading this book to revisit some of the best stories I read while reviewing for Locus (my tastes were fairly close to Dozois’). Furthermore, I have files of the review columns I submitted to Locus, so I can look up my reviews from back then! That doesn’t mean I won’t reread the stories now, but it will be interesting to see if my impressions of reading the stories now will be any different than what I wrote back then. (To some degree, I expect them to, since I have refined both my worldview, and what I expect of science fiction, over the past 20+ years.)

Also, my long-range reading plans *do* include revisiting classic short fiction (which I’ve begun erratically in recent years). And so, far from interrupting plans I might otherwise have had, this anthology read fits perfectly with my plans, indeed gives an excuse not to keep putting them off.

Now then: Robert Silverberg. One of my favorite science fiction writers of all time, for reasons I’ve mentioned elsewhere and can expand on another time. 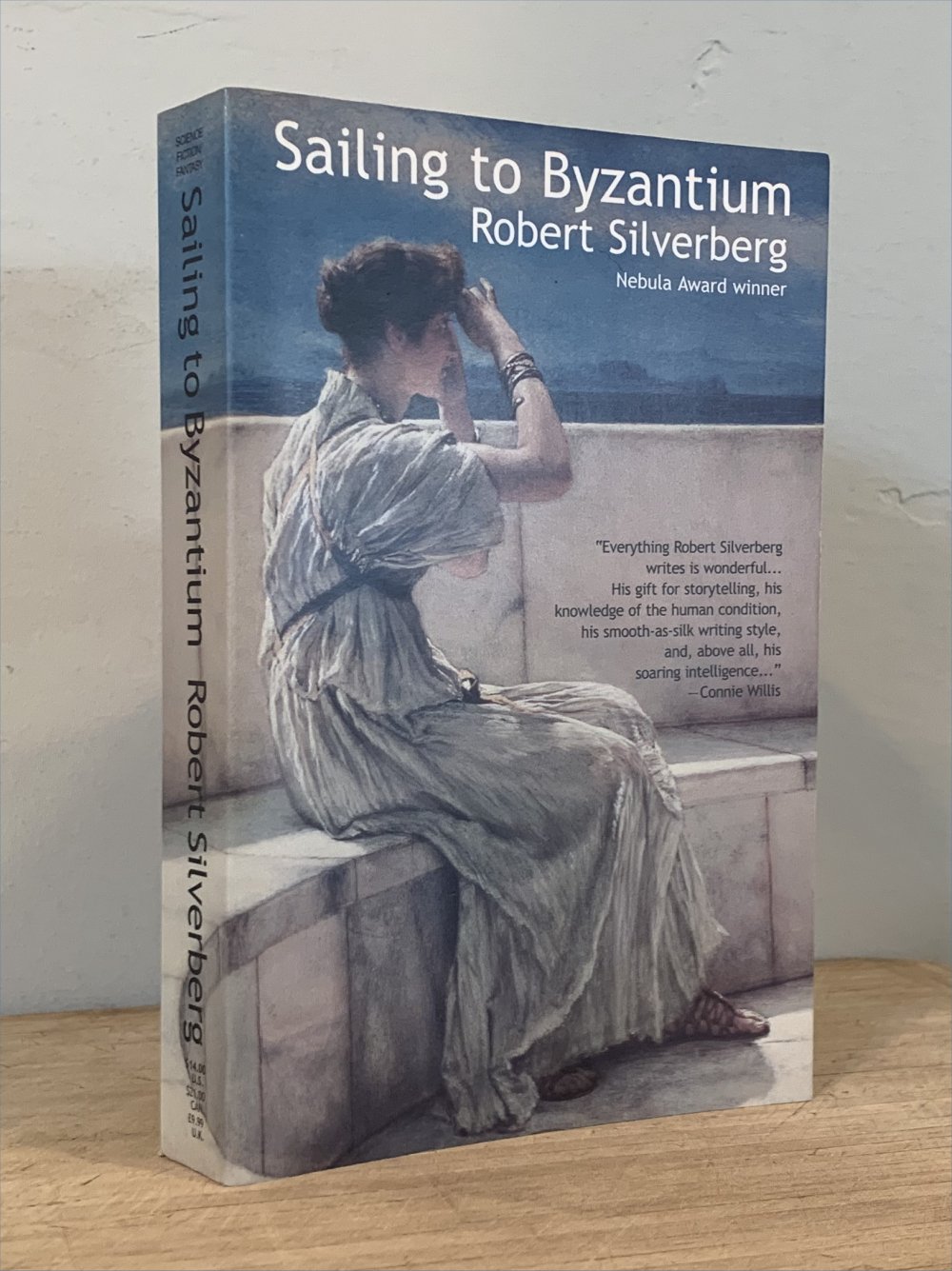 The image above isn’t of its first publication; that would be in an issue of Asimov’s magazine (my copy of is buried in a box in my garage). This book, a collection of five novellas, was published in 2000.

“Sailing to Byzantium” is a far-future science fiction story about a man, Charles Phillips, who with memories of his life in 1984 finds himself in a re-creation of the city of Alexandria in the 50th century (he is told), in which the world population is small and only five cities exist at a time. Every once in a while one of the five is dismantled to allow for another ancient city to be reconstructed. He is accompanied by a female companion, Gioia, as they explore Alexandria, then travel east to Chang-an. He lives with her, not worrying about the puzzle of his past, until complications ensue: he perceives that Gioia has gray hairs and may be growing older, as no one else in the time does; and he meets other “visitors” who seem like himself from out of this time. Eventually he discovers his true identity, and ponders what his existence and identity actually mean.

The story is rich in historical and cultural details, as reflected in other Silverberg tales from Up the Line (1969) to Gilgamesh the King (1984), and informed obviously by Silverberg’s own travels around the world.

When I reread this story a couple of years ago, I had been reading Yuval Noah Harari’s Homo Deus (review here), with his speculations about what people will do whose jobs have become obsolete, i.e. when they don’t *need* to work to maintain a high standard of living. His main suggestions are pharmaceuticals and computer/VR games. Does Silverberg’s tale here depict a kind of VR game? Or the equivalent, with ‘reality’ easily malleable and the entire population living like tourists without the necessity or apparent will to work? Utopia, or stagnation? Does it matter?

It might be said — this is a provisional conclusion, pending my reread of more of his later short fiction and novels — that Silverberg was never an innovator in science fiction in the sense of inventing new concepts, or extrapolating current science into new situations, as the hard SF writers did. But what he did was to endlessly play variations of standard SF concepts, and their philosophical implications, and envision them across a vast realm of cultural spaces ignored by, or simply unknown to, most other writers of his era.

Again, in line with this: the bottom line of this story ponders a genuine philosophical conundrum, which (as I said in my comments to sfadb’s novella rankings, where this story placed 7th) compares to that in Ted Chiang’s “Story of Your Life.” That is, if we’re not “real” in the sense that we imagine, does it matter?

What I posted to the Fb SF short fiction group:

Silverberg is one of my favorite SF writers, and this is one of his best stories, though there are others I like just as well. The strengths here are his visions of this recreated past and imaginary future — Silverberg traveled the world and wrote history, both fiction and nonfiction, so this story is like reading a guided tour, even of places that never have existed — and the way protagonist’s personal quandary evokes philosophical implications. Silverberg was never a gizmo guy, no inventor of original science fictional concepts or extrapolator of breaking scientific discoveries, but what he did (past tense, since he seems to have stopped writing for good) was take familiar concepts (especially time travel) and weave endless variations of circumstances and consequences, always with strong characters and vivid settings, and frequently touching on broader philosophical truths. In this story, so he is a construct, just software in a sense. But does it matter? Not in the poetic sense, at least. Much longer discussion about this story, and reading groups in general, on my blog. (Not sure I’m allowed to link here.)