Two items today that fit neatly together. They are illustrations of demographic trends that seem always to align. Red states, religion, support for authoritarian politicians, disapproval of abortion, disapproval of certain books, distrust of science, and lack of social services. And higher death rates. 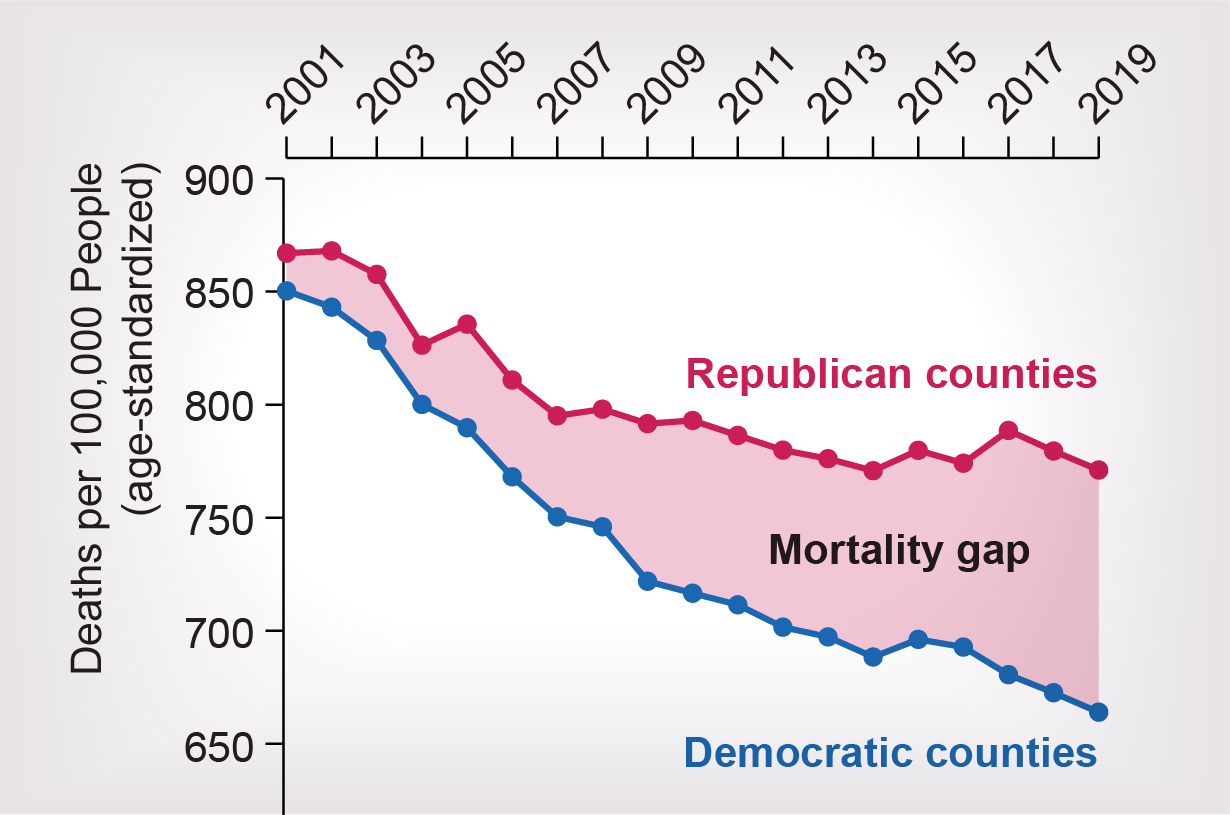 NY Times, 28 July 2022: States With Abortion Bans Are Among Least Supportive for Mothers and Children

Subtitled: “They tend to have the weakest social services and the worst results in several categories of health and well-being.”

Mississippi embodies a national pattern: States that have banned abortion, or are expected to, have among the nation’s weakest social services for women and children, and have higher rates of death for infants and mothers.

What are these states thinking? Why would they think this way? Well, for one, they are mostly red states, and the most religious states. Leave it at that for now.

The second item, via David Brin on Facebook, is about this article:

Subtitled: “A growing mortality gap between Republican and Democratic areas may largely stem from policy choices”

With charts of deaths per 100,000 people in Democratic counties vs Republican counties. The latter are higher. The different is described as a “mortality gap.” The trends under Covid were just the latest example.

Decades ago rates were about the same, e.g. in 1959, the article explains.

In the intervening decades liberal states enacted more policies to address health concerns while conservative states went in the opposite direction, with inflection points in the early 1980s 1994 and 2010. Montez notes that those dates line up with Ronald Reagan’s election as U.S. president, Newt Gingrich’s control of Congress and the rise of Tea Party politics. … Conservatives tend to see health as a matter of individual responsibility and to prefer less government intervention. Liberals often promote the role of government to implement regulations to protect health.

Ironically, contra New Hampshire, the conservative motto would seem to be “live free and die.” This article also considers firearm death rates, by state, from Mississippi (the worst), to Hawaii (the best). The state I live in, California, is 6th best.

What David Brin said on Facebook of course aligns with the themes of his book Polemical Judo (reviewed here) and his own blog posts.

A growing mortality gap. ‘Policy choices’ do matter. But of at least equal import: rates of TURPITUDE. Domestic violence, gambling, addiction, STDs, teen sex/pregnancy/abortion, divorce. net tax-dependance on the rest of the nation +many others. The worst depravity? Howling “We’re much more MORAL than Blues!” When every metric but one proves the opposite.

What’s that exception? Verbal courtesy. Everyone knows red zone folks talk slower and use more gracious tones than hurried urbanites. And ever since the Andy Griffith show, they have parlayed that into a mythology of moral superiority. And manliness. Though nowadays they flee, squealing, from any sort of wager over facts.

(Divorce is not always, or even mostly, a ‘turpitude. But statistically it IS telling that the top 15 national republican leaders since 1980 have had thirty marriages among them. I know of just one divorce among the top 30 Democrats, though likely there are a couple I’ve missed. This should mean something to MAGAS, but no Dem pundit has the guts or insight to point.)

Let me be clear: I support CONTINUING the 80 year net flow of subsidy from blue to red America. (Though no longer subsidies for fossil fuels and beef and gasahol.) Tons of infrastructure! (Blocked by the GOP.)

Though if red counties (not whole states) wish to ‘secede,’ we can talk.