The Universe Is Enormous, and Reductionist

A couple science links (for a change) and some more endpiece. 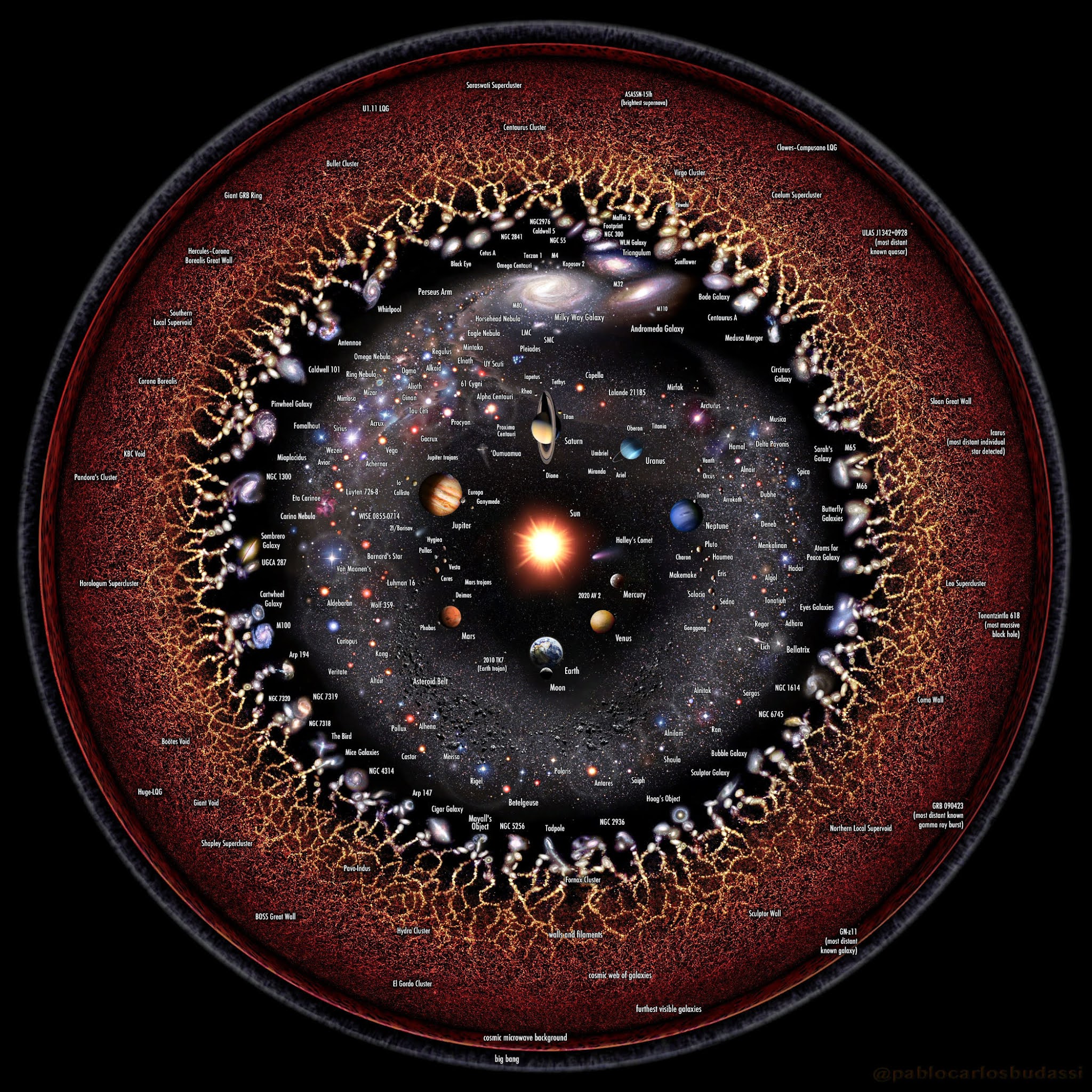 Big Think, 22 Aug 2022: This logarithmic view of the Universe will blow your mind

Subtitle: “As we look to larger cosmic scales, we get a broader view of the expansive cosmic forest, eventually revealing the grandest views of all.”

A series of diagrams, scaled logarithmically by factors of ~10,000, showing Earth’s local neighborhood to the stars (most in Earth’s skies are under 1000 light years away) to the spiral arms to the local galactic group… and five steps beyond that. The cosmos is unimaginably vast.

The entire diagram is here, but it’s very tall so I won’t try to embed it into this post.

I’ve always been fascinating by diagrams like these that try to wrestle enormous times and distances down to things humans can more-or-less comprehend. The most famous is probably Carl Sagan’s “Cosmic Calendar”. I have some bookmarks somewhere of many similar scales I’ve found online over the years, and eventually will compile them here.

Another. Like the above, there’s nothing precisely *new* here; this is just another presentation, another summary, but a good one.

Subtitle: “The whole isn’t greater than the sum of its parts; that’s a flaw in our thinking. Non-reductionism requires magic, not merely science.”

This has been uncontroversial among those who study such matters — i.e. scientists — for going on a century. Everything can be explained via basic physical properties and their emergent properties in chemistry, biology, neurology. This shouldn’t be scary, though it is to those who need to believe in magical thinking, the “soul,” and so on. (My favorite analogy here is that the 26 letters of the alphabet are sufficient to establish the “meaning” of any number of books, including the Bible, without resorting to some magical property that imbues paragraphs and chapters with some special meaning not already evident through the arrangements of letters.)

And, to be clear, the “null hypothesis” is that the Universe is 100% reductionist. That means a suite of things.

And it goes on to address “apparent emergence” and the “God-of-the-gaps” argument.

In late 2016, the cat I’d had for nearly 20 years, Munchkin, died. (She was a stray, found sometime in the late 1990s when she had two kittens in my Granada Hills back yard.)

We waited about a year, then adopted two cats from a foster agency: Potsticker and Soybean.

About a year after that, now late 2018, we took in a stray cat, or kitten, that had been hanging around in our narrow back yard, perhaps because he could see through the sliding glass door from the dining room to see not just us but our two cats. We fed him, even took him in. He likes our cats, but was very shy around humans. He was never comfortable being an indoor cat (as the other two were). So in fall 2019 he escaped, slipped outside another sliding glass door, and we never saw him again.

But we saw a neighborhood cat, two days ago, that may have been him. A block and a half down, across the street from where I photoed that vintage Chevrolet truck several months ago. A black and white cat, who ran across the street in front of us, then sat looking back at us. He had a collar and a red metal ID tag. What struck me was that this cat had the same diamond-shaped black spot on his otherwise white chin that Pixel had. Could it be him? Or was this cat too black, whereas Pixel was half white and black? Hard to be sure. When Pixel escaped our house, presumably he wandered the neighborhood, and it’s plausible he found another household not very far away that fed him. Took him in, collared him. And let him be the outdoor cat he wanted to be.

Or maybe it’s Pixel’s brother. If a litter of kittens was wandering wild in late 2018… that’s plausible too.

If I see this cat again, and if I have the chance without being intrusive, I’ll talk to the residents of the house where we saw it and ask when they acquired it. Late 2019, perhaps…?

Yet the more I look at photos of Pixel, the less I’m inclined to believe the cat we saw was him. Close. There are lots of black and white cats with black spots on their chins, of course. 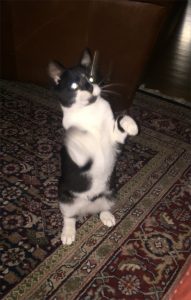