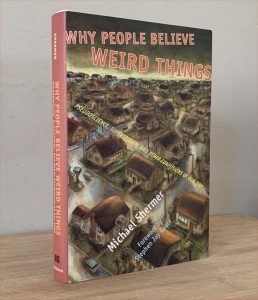 Here’s one of the earliest books that address human irrationality in terms of both the evidence against various pseudoscientific beliefs, and the psychological motivations that lead people to believe things that aren’t true. It wasn’t the first such book to do this; Nicholas Humphrey’s LEAPS OF FAITH (SOUL SEARCHING in the UK) did a good job the year before in 1996, and Thomas Gilovich did something similar in HOW WE KNOW WHAT ISN’T SO in 1991. For that matter, Shermer’s book here is as much a collection of  *what* weird things people believe, as much as it is about why they believe them; thus it aligns more with Martin Gardner’s FADS & FALLACIES IN THE NAME OF SCIENCE from 1952 than the other two titles just mentioned. (The weird things are mostly different; the pervasive credulousness hasn’t changed. I’ll have to glance back through Gardner to see if he had any speculations about *why*.)

END_OF_DOCUMENT_TOKEN_TO_BE_REPLACED 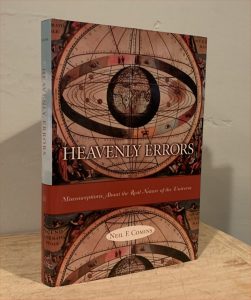 This is a book I’ve had for nearly 20 years, since its publication in 2001, and finally I sat down last year, 2020, and read it. I had thought it would be a book about common misconceptions of the universe (as the subtitle says) along the lines of: there is no “dark” side of the moon; things fall at the same rate, regardless of weight (disregarding air friction); spaceships do not make sounds in space; and so on.

It’s partly about that, but just as much about *why* people believe incorrect things, with a heavy emphasis on psychological biases, intuitive thinking established in childhood, and social forces encouraging pseudo-science. Thus this book is on the same spectrum from that textbook LOGIC AND CONTEMPORARY RHETORIC, Shermer’s WHY PEOPLE BELIEVE WEIRD THINGS, Bering’s THE BELIEF INSTINCT, Shtulman’s SCIENCELBIND, and the numerous books about human psychology, from Kahneman, Haidt, and others.

END_OF_DOCUMENT_TOKEN_TO_BE_REPLACED

Frank Wilczek is a Nobel Prize-winning physicist, whose earlier book A BEAUTIFUL QUESTION: Finding Nature’s Deep Design (2015) I have but have not yet read. (It looks fascinating – the kind big picture book, that tries to understand history or reality in the broadest possible terms, that I find especially compelling.) 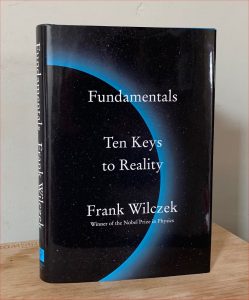 His new book is FUNDAMENTALS: TEN KEYS TO REALITY, just published earlier this month. And partly because it’s relatively short, and partly because of my resolution to keep up on significant books as they are published, I read it right away, within the week after it was published.

It’s short and written in deceptively simple prose, some 228 pages of largish type in a book somewhat smaller than the standard hardcover. But that’s because the concepts he describes are often abstruse (as reality is, compared to mundane human understanding). It wasn’t a fast read; I found myself rereading paragraphs to make sure I understood his point.

END_OF_DOCUMENT_TOKEN_TO_BE_REPLACED

Nicholas Kristof’s letter to his conservative friends; Paul Krugman on the party of bizarro; CNN on the post-Trump era; The Week’s Ryan Cooper on GOP extremity; Slate’s Jeremy Stahl asks House Republicans if they believe in Jewish Space Lasers.

END_OF_DOCUMENT_TOKEN_TO_BE_REPLACED

Posted in Lunacy, Politics | Comments Off on Links and Comments: Space Lasers. Being Played. Bizarro.

Links and Comments: Law and Order except for T***p; Capitalism except for the rich

Republican motivated reasoning about the legality of the impeachment trial; Thomas L. Friedman (NYT) on “Socialism for the Rich. Capitalism for the Rest.”

END_OF_DOCUMENT_TOKEN_TO_BE_REPLACED

Posted in Lunacy, Politics | Comments Off on Links and Comments: Law and Order except for T***p; Capitalism except for the rich

Slate’s William Saletan on Republicans vs. liars; NPR on vaccine resistance; Salon on reactions of QAnon to Biden’s inaurguration; a long NYT piece about what goes on inside QAnon chatrooms; how science denial is a form of conspiracy theory; why conservatives hate science.

END_OF_DOCUMENT_TOKEN_TO_BE_REPLACED 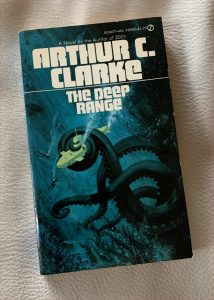 END_OF_DOCUMENT_TOKEN_TO_BE_REPLACED

I’ve updated my Memoirs page with a number of essay posts from the past year, and promoted the whole page to the top level menu. I’ve cleaned up with consistent headers this page and the Family History page.

I began this project with the notion to scan family photos, especially the ‘slides’ in the three metal boxes I inherited from my father, of their family and travels in the 1950s. Yet over the past year, I’ve written many essays of family history and personal memoirs, without having scanned many of the remaining family slides in over a year now. Well, I think the narrative is more important, and I’ll get to the slides eventually; I’ve already done the slides that show family members. There are also photos from my albums, prints of photos taken on various trips, and to conventions, from the 1980s and 1990s, that I may scan to supplement my memoir essays. By the 2000s everything became digital, and I have lots of folders of those photos to post, perhaps, too.

Ironically, one of the people I’ve had most in mind as a target of these family history essays and photos (and perhaps my memoir essays), was my younger brother and his family (in Tennessee). But when I challenged his support for the Plandemic documentary back in, what, April 2020?, after a couple email exchanges, both he and his wife unfriended me on Facebook, and he hasn’t replied to my emails since. (We’ve never kept in touch by phone, over the decades.) So I suspect he will never see or care about this family history, or anything else I have to say.

But whose family history ever survives? A generation at best. And then it will all be forgotten. Try as you might. We will all soon disappear in history.

Posted in Personal history, Website Issues | Comments Off on Memoirs and Site Updates

The QAnon cult is reeling from the evaporation of the promises Q and a certain former president made about what would happen on inauguration day. It’s like those many examples over past centuries of apocalyptic cults, anticipating the end of the world or the arrival of aliens on a particular date, and then hastily explaining away the failure of their prophecies to come true, as best they can to prevent fleeing adherents. Most of the time they fail, and disappear, which is why we’ve never heard of them.

Prediction: QAnon fans will regroup. They will explain away the failures of January 20th. They will revise their predictions. As those earlier failed cults did.

Now we are seeing such a cult react to failed prophecies in real time. To wit:

Politico: Trump leaves QAnon and the online MAGA world crushed and confused, subtitled “The prophecies did not come true. And people are fuming about it.”

The pardons went to Democrats, lobbyists and rappers, with nary a “patriot” among them. The mass arrests of Antifa campaigners never came. The inauguration stage at the Capitol, full of America’s most powerful politicians, was not purged of Satan-worshipping pedophiles under a shower of gunfire. Even the electricity stayed on.

The moment the clock struck noon on Wednesday, Jan. 20, it was over — and the extreme factions of Trump’s diehard base were left reeling.

Forbes: ‘We All Got Played’: QAnon Followers Implode After Big Moment Never Comes. Among this piece’s key facts:

QAnon adherents appeared to have fractured into two groups on popular far-right message boards Wednesday, with some realizing their crackpot conspiracy theory was a fraud, while others tried to somehow keep the flame of the Crazy Candle alive.

Washington Post: QAnon believers grapple with doubt, spin new theories as Trump era ends, subtitled “The administrator of 8kun, the longtime Internet home of the mysterious Q, says it’s time to move on, and a moderator on Wednesday wiped Q’s ‘drops’ from the website”

QAnon, as with most online creations, probably will not disappear any time soon. On Tuesday night, a small crowd of picketers rallied with signs urging “Repent or Perish” outside Comet Ping Pong, the D.C. pizzeria at the center of Pizzagate — the 2016 conspiracy theory from which QAnon was born.

View predicted that the QAnon community may shrink in the coming months but also become more fervent in their commitment to its ideas.

“History has taught us far-right movements don’t cool off during a Democratic administration,” View said. “The people who stick with it are going to become even more radicalized and potentially more dangerous.”

CNN, The Point: Is the QAnon movement dead?

Wednesday was a rough day for believers of this conspiracy theory. The reaction has been mixed.

Some believers seem to be coming to the realization they have been duped. For some of them, it was confirmation of suspicions they have had for a while. They feel like Trump has betrayed them.

NPR: The QAnon ‘Storm’ Never Struck. Some Supporters Are Wavering, Others Steadfast

QAnon is less a baseless conspiracy theory than an umbrella of many baseless conspiracy theories, but it centers on a belief that there is a shadowy cabal of pedophilic, satanic world leaders. For years, a mysterious figure called Q has issued promises that this cabal is on the verge of being exposed and defeated by Trump in a cataclysmic event that QAnon calls “the Storm.”

And, via a FB post (this is not a site I regularly visit), this:

Religion Dispatches: QAnon’s Predictions Haven’t Come True; So How Does the Movement Survive the Failure of Prophecy?.

Fascinating article about the general phenomenon of cult prophecies. What happens when they fail? I’ll quote:

This sounds much like the way believers rationalize away those controlled studies that show that intercessory prayer doesn’t work.

I’m not making fun of QAnon adherents, exactly; actually though, I am astonished by their gullibility. I find the phenomenon a fascinating example of how human nature creates approximations that lead to fantasies about how the world works. And one of my theses is that these can be harmless, in the sense that these people still live their daily lives, have children, and carry on the race. Until they start insurrections on the Capitol.

There is a rich history of such cults, as mentioned above, and mostly they wither and die and are forgotten, except for being written up in books about such phenomenon, some of which I have.

The obvious comparison or contrast of such cults is with traditional religions, despite their own failure of their prophecies to come true, yet which endure for thousands of years. Thus, Jesus still hasn’t reappeared, despite promises 2000 years ago that he would return within the lifetimes of his followers. Yet people are still Christian, and many are certain Jesus will return in *their* lifetimes. The psychology is the same, I think.

This is where we cue the Sunk Cost Fallacy. And tradition (for example), vast and intricate and soul-fulfilling. But only a guide to an enriching fantasy; not to a reality.