The Stars Have Names

Here’s an interesting article from the December 6th, 2016 New York Times, Twinkle, Twinkle Little [Insert Name Here], by Dennis Overbye (the print title was “Twinkle, Twinkle, Who?”), about how the International Astronomical Union (IAU) has finally sat down to compile an *official* list of named stars. No, those certificates you bought naming some random star for your boyfriend or girlfriend don’t count. 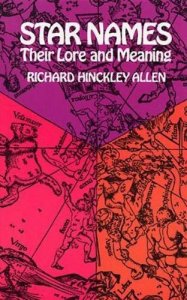 This subject fascinated me for a period of several years in my teens, and college years. It overlapped my interest in genuine amateur astronomy — looking at Jupiter’s moons, Saturn’s rings, the nebulae, the globular clusters, the double stars, and double doubles like Epsilon Lyrae, and all the Messier objects, all through my three-inch refractor telescope, a 6th grade birthday gift) — but also tickled my interest in the mythologies and histories of how several hundred stars got the rather odd names they came to have, centuries ago, and still have. (Principle idea: most of the names are Arabic, from a time when Christian Europe wallowed in the Dark Ages and the Arabs were the scientists of the world.) It also appealed to my list-compiling instinct. I poured over three books in particular: a hefty Dover trade paperback called Star Names: Their Lore and Meaning, by Richard Hinckley Allen; a just-published hardcover, in September 1971, called What Star Is That?, by Peter Lancaster Brown, mostly an observer’s guide with constellation descriptions and maps, but which happened to include many proper names of individual stars [I can’t find a clean cover image of that book online just now, and my scanner is down, but will fill this in later]; and Outer Space: Myths, Name Meanings, Calendars: From the Emergence of History to the Present Day, by Gertrude and James Jobes, which I poured over in the Victorville Public Library during summers in Apple Valley, and which decades later I found a copy of for myself via Abebooks. 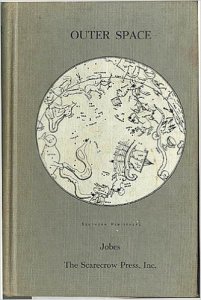 The first and third of these especially delved into history and mythology, citing names of constellations and stars from cultures worldwide. The Brown book compiled star names commonly used by astronomers, and over several years I sought out other volumes of star maps, astronomical guides, official dictionaries, and whatnot, and compiled hundreds (yes, hundreds) of handwritten, then typed, pages of lists of star names, by source and by constellation, cross-referenced (though, alas, all on paper; no way to easily digitize). Though the brightest and best-known stars have familiar names, even they have variations in spelling due to the translations from Arabic, over the centuries. There are one or two hundred name very commonly repeated in many sources, and another couple hundred less frequently cited, some of them contemporary appellations.

Seeing the IAU site, which has this homepage for the naming stars project, and several related pages with the official names in various orders, I this afternoon found, deep in my file cabinet, several folders of the data I compiled some 40 years ago, and am tempted to sort through it and see if the IAU is missing anything obvious. I cross-referenced all my sources… and can provide a bibliography of them.

Will follow up here if I do. As if I don’t have enough other projects underway…

This entry was posted in Astronomy, Personal history. Bookmark the permalink.