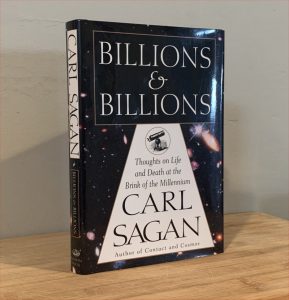 Carl Sagan: BILLIONS & BILLIONS: Thoughts on Life and Death at the Brink of the Millennium (1996, Random House)

This was Carl Sagan’s final book, it says, published in 1997 not long after his premature death in 1996 at age 62. Actually, there was one further book, The Varieties of Scientific Experience, published in 2006, based on a series of 1985 lectures, belatedly assembled by his widow Ann Druyan. (Post about it here.)

This book is a collection of essays on various topics, many, the author acknowledges, based on shorter essays written for Parade magazine. This is an interesting point for a couple reasons. Parade is a Sunday supplement magazine that’s been distributed to newspapers in the US for decades, and so its topics have always been light. Also because these days, as I see it inside the San Francisco Chronicle, it’s very thin, mostly full of ads and clickbait-like lists of recipes or celebrity factoids (and a quarter page single Q&A by Marilyn Vos Savant), with no essays even approaching a 10th the length of Sagan’s essays in this book. Parade in the 1980s and ‘90s, when most of these essays were first published, must have been quite different.

The book is divided into three sections:

And then the final chapter, and epilogue by Anne Druyan, describes Sagan’s death. How in 1994 he was diagnosed with a rare disease, how he was treated repeatedly with bone marrow transplants, how they moved to Seattle for treatments. Druyan recalls how they first met, how now at the end the family gathers, and how afterwards mail came from people mourning his loss. I wasn’t expecting this; I’d never known the details of Sagan’s death. These descriptions were heartfelt and moving.