Carl Sagan, THE VARIETIES OF SCIENTIFIC EXPERIENCE (2006): History is a battle of inadequate myths 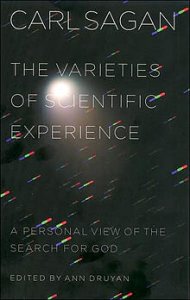 Here’s a book I had forgotten I had, relatively speaking; I obviously bought it back in 2006 or so, but I didn’t read it right away and so it sat on my shelves among many other books (by Sagan and many others) for years. As I was packing and unpacking books during our move a year and half ago, I noticed it anew, especially since it appeals to my current interest in the grand scheme of things, how science and religion and science fiction intersect and relate. So I pulled the book off the bookshelf, and onto my to-read-shelf, and finally read it last month.

The book compiles a series of lectures Sagan gave in 1985, just five years after his TV series Cosmos was broadcast to great acclaim and made him a media star and frequent Tonight Show guest. The book didn’t appear until 10 years after Sagan’s death in 1996. It’s subtitled “A Personal View of the Search for God”, and is edited by Ann Druyan, his wife, and later writer of Neil deGrasse Tyson’s recent reboot of the Cosmos. All those beautiful words, in that series, that I sometimes quoted at length (e.g. here, were narrated by deGrasse Tyson — but written by Druyan.

And in fact Dryan’s introduction is gorgeous and inspiring, but for the moment I’ll focus on Sagan’s lectures.

The irony is that the lecture series in which Sagan was invited to participate back in 1985 was on the topic of “natural theology”, i.e. the idea that theological knowledge can be established by reason and experience and experiment alone, not by revelation or mystical experience, as Sagan describes in lecture 6. It’s ironic because Sagan, delicately but repeatedly throughout these lectures, dismisses the notion of such theological knowledge. Sagan, throughout his many books, avoided any direct discussion of his opinions about God, or any implication of his atheism. He preferred to dwell on the positive, so to speak — what experience and experiment tell us about the universe itself, and how grand it is. So without ever directly challenging any religious beliefs, in these essays, he repeatedly, politely, mentions such notions and then wonders if we should not perhaps seriously consider that there might be better explanations. In so many words, or less.

The book is a tad dated in its preoccupation with issues that were important to Sagan, and to society, at the time: UFOs, ancient astronauts, the threat of nuclear war.

Brief outline with some quotes:

Lecture 1, “Nature and Wonder: A Reconnaissance of Heaven”

Sagan quotes Plutarch, Carlyle, Einstein, discussing the region between godlessness and superstition, and how the best way to induce awe is by looking up at night. Apparently during this essay there were lots of photos of nebula and diagrams of the solar system, which are captured in the book. p27.6:

And this vast number of worlds, the enormous scale of the universe, in my view has been taken into account, even superficially, in virtually no religion, and especially no Western religions.

Lecture 2, The Retreat from Copernicus: A Modern Loss of Nerve

We tend to “project our own knowledge, especially self-knowledge, our own feelings, on others” and we have a sense of privilege, thinking ourselves the center of the universe. Yes! — here is Sagan, 30 years ago, anticipating what psychologists have been confirming and crystallizing in recent decades, about human mental biases (as posted here about David McRaney, among several related posts). Thus Aristotle presumed a privileged Earth, stationary, around which everything else turned. He was wrong; nor were the heavens perfect. More recently resistance to evolution is an “assault to human vainglory” 39.3; special relativity in the 20th century; dismissing the argument from design; explanations for the anthropic principle; quoting Rupert Brooke’s poem “Heaven” about a fish’s view of reality and eternity.

There are no crystal spheres. 64.2: “The history of science in the last five centuries has done that repeatedly, a lot of walking away from divine microintervention in earthly affairs.” We’re left with a God of the Gaps, a do-nothing king. Evolution is not intuitive because it involves vast amounts of time. Why the objection about the odds against complex molecules randomly forming, like a Boeing 747 forming by a whirlwind, is misguided and ignores the reality of evolution.

We have concepts for more *powerful* beings than us (angels, demigods), but not for beings more intelligent than us. Even scientists can get things wrong, lured by a predisposition to believe: Schiaparelli and his (mistranslated) ‘canali’. What kind of evidence would convince us of demigods, or ETs? Plausibility, to begin with. The Drake equation, failures of imagination, and a Clarke quote about the threat to Christianity of the discovery of ETs.

Lecture 5, ET Folklore: Implications for the Evolution of Religion

Addresses the then (in the ’70s and ’80s) popular notions that “ancient astronauts”, i.e. aliens, visited Earth and were responsible for the pyramids and other artifacts, popularized by the books of Erich von Däniken. Why do people want to believe in such things? Perhaps in hopes of someone to save us from ourselves. There isn’t even one good example of a UFO, and plenty examples of fraud. 134.3: “I maintain, that we are dealing with some combination of psychopathology and conscious fraud and the misapprehension of natural phenomena, but not what is alleged by those who see UFOs.”

People get angry when ‘miracles’ are explained. History of failed prophecies, e.g. charismatic leaders who predict the end of the world, and whose believers still believe even when the world doesn’t end! Discusses the emotional stakes people have in wanting to believe, comparing it the the skepticism inherent in buying a used car.

And you do this for something as unimportant as an automobile. But on issues of the transcendent, of ethics and morals, of the origin of the world, of the nature of human beings, on those issues should we not insist upon at least equally skeptical scrutiny?

Many ideas of God over the centuries. Suppose there were proof of a god who, say, originated the universe but was indifferent to prayer?

Proofs of God? Sagan cagily starts with a list of 11th century Hindu proofs of their God, among them: Things must have a cause; an argument from atomic combinations; from the suspension of the world (we aren’t falling); the existence of human skills; the authoritative knowledge in the Hindu holy books—surely God must have written them. (Example of Sagan understatement, 154.8, “…these arguments are not always highly successful.”)

Western examples: cosmological, design, morals. He mentions various logical possibilities, then remarks, p157.5, “And it’s curious that human myth has some of these possibilities but not others. I think in the West it’s quite clear that there is a human or animal life-cycle model that has been imposed on the cosmos.” [Yes, exactly!] Followed immediately by his trademark understatement, “It’s a natural thing to think about, but after a while its limitations, I think, become clear.”

Then Anselm’s ontological argument, which Bertrand Russell dismissed as ‘bad grammar’. Personal experiences of God are no more reliable than witnesses of UFOs. Problem of evil. Why long lists of things God tells people to do? 165.3:

Why didn’t God do it right in the first place? You start out the universe, you can do anything. You can see all future consequences of your present action. You want a certain desired end. Why don’t you arrange it in the beginning? The intervention of God in human affairs speaks of incompetence.

Why not clear evidence of his existence? Phrases in the holy books we’d only understand later. Engrave the ten commandments on the moon. Concerning the convergence between revelation and knowledge of the natural world, why is this convergence so feeble when it could easily have been so robust? (Echoes of the Sean Carroll book I just read.)

Our emotional predispositions were set millions of years ago, to some selective advantage. We can examine them by studying modern primitives. Hunter-gatherers. Some are highly hierarchical; others more democratic. One scientists analyzed them against characteristics of whether they hug their children and whether they permit premarital sexual activity among adolescents. Where these things are not permitted, powerful hierarchies emerge; where they do, such hierarchies don’t exist yet everyone’s happy.

Other characteristics: animism; sacrifice (propitiation to the gods) that devolved into prayer, neither of which actually influence the gods, or God, as pointed out beginning in late Victorian times. Not that anyone who believes is convinced. That says something about ourselves. P177b:

I maintain that everyone starts out with that sort of attitude. We all grow up in the land of the giants when we are very small and the adults are very large. And then, through a set of slow stages, we grow up, and we become one of the adults. …

The formative experiences of propitiating adults lingers into adulthood. “Could that have something to do with prayer specifically and with religious beliefs in general?” 178.4. As Freud suggested.

Moving on to discussion of chemicals in the brain. Hormones. LSD. Suppose something called “theophorin”, a material that makes you feel religious. Wouldn’t be useful, for social conformity? Submission to the alpha male, the ruling classes, the biblical God?

We cherish tradition, but the world is changing fast. P193t how things have changed from a couple centuries ago. The wisdom of the ancients does not necessarily still apply. Thus, 193.9, “wisdom may lie not in simply the blind adherence to ancient tenets but in the vigorous and skeptical and creative investigation of a wide variety of alternatives.”

Thus science, unprecedented from previous eras. Evidence of extinctions 65mya. The current threat is nuclear war—but how have religions reacted to the threat? The most dangerous are the Christians who see the prospect as consistent with Revelation, and welcome it. The nations of the world stockpile more weapons; what about the Christian dictum to love thy enemy? No nation takes that view.

We are still a world of tribes growing into city-states, nations, empires. We need new alternatives; “We run the danger of fighting to the death on ideological pretexts.” 216.8. History is a battle of inadequate myths, everyone feeling threatened that their own worldview might be exposed as a lie, willing to fight to prevent that, p217t. The prevailing conclusions of science are poorly accommodated by religion, 218. But things have changed: we’ve abandoned the divine right of kings, we’ve abandoned slavery.

We need more than one example of a planet, of an intelligence, before we can understand ourselves better. The search is endless; it

goes with a courageous intent to greet the universe as it really is, not to foist our emotional predispositions on it but to courageously accept what our explorations tell us.