Review of David McRaney’s You Are Not So Smart 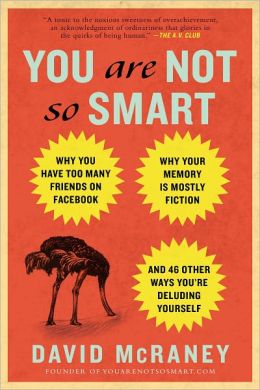 As I mentioned in a Facebook post last night, without bookstores to browse through, I discover titles and authors I might not otherwise have seen most often through web excerpts and interviews — at sites like Slate and Salon, Huffington Post, various science and skeptic blogs. As I recall my first exposure to David McRaney was an excerpt from his latest book, YOU ARE NOW LESS DUMB, on Salon a couple months ago — I quoted from it, here.

I then bought that book, and then his first book, YOU ARE NOT SO SMART from 2011 (both published by Gotham Books), and paused reading the second to read the first first.

It was reading these books that prompted me to recall LOGIC AND CONTEMPORARY RHETORIC, which I posted about here; these McRaney books appeal to interests I’ve had for decades: how to think logically, and how to see through illogical arguments; pseudoscience and why people believe things so passionately for which there is such dubious evidence at best; and, more grandly, the limits of human perception about reality, if the human mind is capable of perceiving what is real instead of basking in illusions of its own making (which in my recent reading is most acutely addressed by Jesse Bering’s THE BELIEF INSTINCT, which I’ll blog about eventually).

I’ve read books along this spectrum over the decades — books by Carl Sagan, Michael Shermer, Thomas Gilovich, and others — but in just the past couple three years it seems like there is a relative wealth of such books, McRaney’s and Daniel Kahneman’s big book (which I haven’t read yet), and others (or, just as likely, it’s my confirmation bias ticking in that I notice such books now that I’m attuned to them…)

Enough preamble. The difference between any of those earlier books that I read and the two by David McRaney is that McRaney isn’t focused so much on logical fallacies or the tricks used by others (advertisers, politicians) to sway you, as the way your mind is biased to *trick yourself*.

McRaney’s YOU ARE NOT SO SMART has 48 chapters in 300 pages. Each chapter, and the introduction, is headed by a two-part summary of its theme, contrasting the common misconception and the ‘truth’, e.g., for the introduction:

THE MISCONCEPTION: You are a rational, logical being who sees the world as it really is.
THE TRUTH: You are as deluded as the rest of us, but that’s OK, it keeps you sane.

Each chapter then follows with an expansion of the theme: a mixture of psychological case studies, the author’s interpretive elaboration, and occasional anecdotes from the author’s own life.

It’s a mix of cognitive biases, heuristics, and logical fallacies. Many of these, in this first book, are very familiar: confirmation bias, argument from authority, the straw man fallacy, the ad hominem fallacy.

This is principally a book about psychology, how the mind works, and it’s grounded in the many psychological experiments the author describes. To take the first chapter, about ‘priming’, which is how you are influenced (without being aware of it) by past experiences and your immediate environment into making decisions. One case study was a game that involved splitting $10, with greedier behavior observed by those who had just seen business related photos or items in the room they were in — and then who later confabulated rationalizations for why they made the decisions that they did.

Later chapters cover a couple very famous (and terrifying) psychological experiments — the 1971 experiment in which students were randomly assigned prisoner or guard roles, and over several days came to exploit those roles; and the 1963 Stanley Milgram experiment in which subjects kept giving higher and higher electrical shocks to a person in another room, as long the professor [the authority figure] kept telling them to do so. [Not mentioned in the book, but I recall the made-for-TV movie with none other that William Shatner dramatizing this study — The Tenth Level.] These experiments, and others, have huge implications about social policy that have yet to be incorporated into legal policy.

This is a terrific book for becoming more self-aware about how you think, and how what you believe may or may not reflect what is real.

McRaney is a journalist, not a psychologist himself, but this book is as compelling as anything by a university Ph.D. And his second book, YOU ARE NOW LESS DUMB, is even better — it’s deeper. (Yes let me mention that these rather flip titles don’t do the books justice; though if they attract casual readers, then I suppose they’re justified.)

I’ll address the second book in a later post.