Michael Shermer: WHY DARWIN MATTERS: The Case Against Intelligent Design (2006)

This is a middle-period Shermer book, from the range that begins with WHY PEOPLE BELIEVE WEIRD THINGS in 1997 (and omitting some earlier and middle-period books on extraneous topics), and the 6th of 12 Shermer books I have on my shelves.

It recycles some material from previous books, especially HOW WE BELIEVE (2000), but has two distinctive themes. First, Shermer sets the book against his own background as a creationist himself, having become a born-again-Christian in high school, and explains how once he got out of that bubble “The scales fell from my eyes! It turned out that the creationist literature I was reading presented a Darwinian cardboard cutout that a child could knock down.” Second, he focuses on the then-current (and still active) dispute between evolution and “intelligent design,” describing the evidence for and against respectively, and why he debates creationists and how such events go. 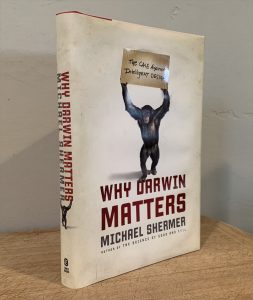 The book overlaps at least the one Shermer book just mentioned, and his summaries of evidence for evolution (and against ID) are familiar too from other books; how could they not be? Still, Shermer’s book is admirably concise, so I’ll go ahead and post a full summary, below. But I will extract some key points.

(As always, with personal comments [[ in double brackets ]])

Ch1, The Facts of Evolution, p1

Ch2, Why People Do Not Accept Evolution, p23

[[ the bottom line always has been: why do the IDers so desperately want to disprove evolution? And not, say, geology or cosmology? Because it offends their sense of feeling special in the world? ]]

Ch8, Why Christians and Conservatives Should Accept Evolution, p126, 13p

Author rewrites Genesis in the language of modern science…

Appendix: Equal Time for Whom?