One more set of badges with commentary for today, then I’ll move on to other things, and catch up on links and comments. Today: badges from World Fantasy Conventions. 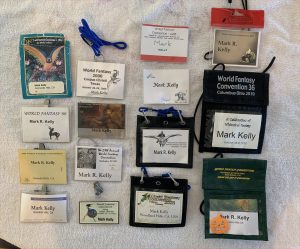 The science fiction/fantasy community has a tradition of gatherings, ‘conventions,’ over the decades. It’s been said that, at least in the US, there is probably an sf/f convention somewhere in the country every weekend. Most of these are small and local. In Los Angeles, for example, there is an annual convention called LosCon, but it’s always held over Thanksgiving weekend, and since I do have family to visit on the holiday, I almost never attended (maybe once). Other big cities have their own. There’s a West Coast convention called Westercon, the name consistent but the city changing from year to year. I did attend a number of these. Others discussed later.

While the local conventions might be more-or-less similar, the big national or international conventions are distinctly different. The Worldcon (previous post) is nominally international, is run by volunteers (fans), and hosts the Hugo Awards, which are voted upon by members of the convention. This convention is generally held every year over Labor Day weekend, at the end of August or in early September, though it does vary. Several times in recent years it’s been held earlier in August, especially when hosted in countries that don’t observe the US Labor Day holiday. (The US uses that holiday in part because the 3 days of the weekend are already days off for US attendees.) This year, 2021, is a more extreme exception: because of the pandemic, the physical event, which organizers still hope will be attended in person, has been postponed until December.

The second most significant convention of every year, at least to professionals and semi-professionals like me, is the World Fantasy Convention. Again, despite the name, it’s mostly a US affair, being held over the weekend nearest to Halloween. (A couple times in Canada, a couple times in the UK, over the past 25 years.)

This convention was founded in the mid-1970s by editor David G. Hartwell, specifically as a fantasy counterpart, or alternative, to the sf-oriented Worldcon. World Fantasy Cons are limited in attendance, to 1500; Worldcons are open-ended. WFCs focus on literature, and art; Worldcons are open to sf/f in all forms, including books and comic books, movies and TV, costumes and superheros. And World Fantasy gives out awards, the World Fantasy Awards, that are juried, not mass-voted, and that are specifically targeted to works of fantasy, so that nothing scoped to both SF and fantasy is considered. In practice, attending a World Fantasy Con means mingling with professionals, even academics, as opposed to the costumed media fans who often dominate Worldcons.

Again, the badges often don’t indicate location or sometimes years. The first I attended was in 1994, in New Orleans.

(Again to set the frame: I attended only one or two conventions of any kind before 1988, when I was 33, when I began reviewing for Locus Magazine. After that, only the Worldcon with an exception or two for nearly 10 years. When I founded Locus Online, in 1997, when I was 42, I was much more a ‘player’ in the sf/f community, and became emboldened to attend more events every years, three or four or five. (And my position did in fact give me license to walk up to and meet many important SF writers who knew who I was!) I scaled back in the 2000s, as demands of my relationship set it; and pretty much abandoned all conventions once I was laid off and became ‘retired’ in 2012.)

This post and other similar ones will be refined and expanded; so far they have been quick half-hour drafts at the end of the day. Somehow even when ‘retired,’ and especially if you have a partner, your days become filled with things that need to be done.