From the October/November 2021 issue, articles about Christian Morality and about how understanding COVID does not depend on a Kuhnian paradigm shift. 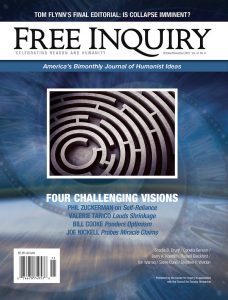 The Myth of Christian Morality, by Simon Brittan

My point in noting this is not because it’s about Christianity; it’s about how, throughout most of history, people have grown up and lived with *one* story (of whatever religious tradition they are born into), and since it’s the only story they know, they view life and their understanding of the world through that story. No matter how incoherent (or inhuman, or evil) that story might be upon close examination. (Especially since most ordinary people, outside the seminary, never examine their holy book in detail, relying on authorities to tell them the relevant parts.)

Let us be very clear: the adherence to a set of rules based on belief in the supernatural does not constitute morality; rather, it constitutes obedience. It requires no thought, no genuine care for the needs of others, no empathy, no love, and no consideration of the consequences of our actions beyond the consequences for ourselves. Moral behavior is a human, not a religious, duty. Again: the religious cannot accept this because to do so immediately makes clear the pointlessness of religion.

Christianity is in the final analysis a death cult. The whole of Christian ethics is based on the desire that the world should come to an end, and for this reason the sole purpose of life is to prepare for that event, a process of point-collecting, of doing whatever is necessary to avoid incurring the wrath of a vindictive god who, like a spoiled child denied a toy, destroys not only it but everything else it cannot have.

I imagine that other religions are subject to comparable analyses. For Christianity (and especially Judaism), what struck me when I read pieces of the Bible a few years ago, is how the stories are *obviously* about one particular middle-eastern tribe and their own particular god (in contrast to all the gods of rival tribes, the “no other gods” of the Commandment), and about their path to dominance, via slaughter and conquest, or rival tribes. (The history we inherit is written by the winners.) And for the New Testament, how Christianity was the invention of Paul. Who never met Jesus. (And how Jesus’ teachings were not always laudable; he wanted you to leave your family and sell all your belongings, to join him. Compare modern evangelical Christianity.)

On Kuhn and COVID-19, by Walter McClure

(This is a subscriber only article.)

The next item is here because it resonated with the recent Michael Strevens book (reviewed here) which in part discussed the positions of the two best-known scientific philosophers of the 20th century: Karl Popper and Thomas Kuhn. Popper’s thesis was that a scientific theory must be, in principle, disprovable; if there’s no conceivable way to disprove a “theory,” then it’s not science. Kuhn discussed how the “paradigms” accepted by scientists can change based on significant new discoveries, e.g. when Copernicus established the sun as the center of Earth’s orbit, not vice versa; after such a shift, everything is interpreted within in the new paradigm rather than in the old.

Strevens’ point was that neither of these was entirely right.

The article here focuses on how the problems with Kuhn’s position relate to the current COVID crisis, though point here is about Kuhn’s thesis and science in general.

… [S]cience operates on a fundamental presupposition—wildly empirically successful so far—that there is an underlying unity to the laws of nature. Thus, science has a goal, an ultimate ideal: to discover the universal paradigm that can correctly explain and predict all observable phenomena.

Kuhn did not understand this radical conservatism of science and the constraint on paradigm shifts and what drives them (they are not a fashion statement) or even that science has a goal. In Weinberg’s words, Kuhn made the shift from one paradigm to another seem more like a religious conversion than an exercise of reason. Kuhn argued that scientific theories are important social constructions, not so different from democracy or baseball. And it is just such conclusions, music to their ears, that have made Kuhn such a hit with the philosophers, historians, sociologists, and cultural critics who actually must deal with social constructions, who are unjustly starved of grants and feel put down by the privileged objective character of scientific knowledge. See, they say, Kuhn shows that science is no more objective and privileged than our stuff.

The only problem is that Kuhn is wrong.

That is, science doesn’t throw out everything old and start from scratch to account for new evidence; it changes as little as possible to accommodate new evidence, leaving what works alone. (Thus Einstein extended Newtonian thinking, which works perfectly fine in limited contexts, he didn’t replace it.) The idea of Kuhnian “paradigm shifts” appeals to people who think science can’t be trusted since it keeps changing its mind, and so would dismiss scientific conclusions as unreliable, or as “relative” in the way the certain cultural critics think everything is.

And the point about COVID is that no new “paradigm” or changes to existing theory of biology or disease is needed to understand it:

Empirically, the Fauci-type establishment protocols, when promptly and strongly initiated and competently done, appear to be beating all others hands down. Countries invaded by COVID-19 that use these strategies conscientiously have far fewer deaths and hospitalizations. Similar countries that don’t, have high rates.

This entry was posted in Philosophy, Religion, Science. Bookmark the permalink.