I posted about my favorite two parts of this book a week ago, in this post, and today will post a complete outline of the book based on my notes as I read, somewhat edited and slimmed down. 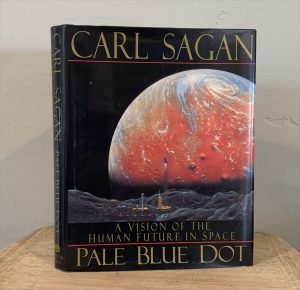 Ch1, You Are Here

Ch4, A Universe Not Made for Us

Ch5, Is There Intelligent Life on Earth?

Ch6, The Triumph of Voyager

Ch7, Among the Moons of Saturn

Ch9, An American Ship at the Frontiers of the Solar System

Ch13, The Gift of Apollo

Ch14, Exploring Other Worlds and Protecting This One

Ch15, The Gates of the Wonder World Open

Ch18, The Marsh of Camarina

Ch22, Tiptoeing Through the Milky Way

One quote, from page 52.5. This was later partially quoted by Richard Dawkins in his Unweaving the Rainbow (1998), as reviewed here.

How is it that hardly any major religion has looked at science and concluded, ‘This is better than we thought! The universe is much bigger than our prophets said, grander, more subtle, more elegant? God must be even greater than we dreamed’? Instead they say, ‘No, no, no! My god is a little god, and I want him to stay that way.’ A religion, old or new, that stressed the magnificence of the Universe as revealed by modern science might be able to draw forth reserves of reverence and awe hardly tapped by the conventional faiths. Sooner or later, such a religion will emerge.