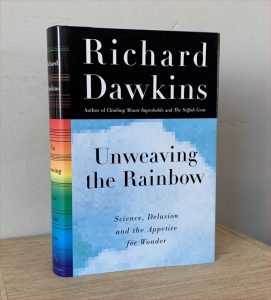 Here is a middle-period book by the Oxford scientist whose writing mostly focuses on evolution; this one is an exception. Its topic is the beauty of science, how science addresses the “appetite for wonder,” and how people who don’t understand science pursue delusions in search of that same sense. It’s a very good book if somewhat uneven; some chapters are crystal clear and insightful; others get bogged down in very specific examples of biological systems that the author is no doubt familiar with but are difficult for layman (at least for me) to follow.

Half-way through Dawkins quotes Carl Sagan, with a passage the represents the key theme of the book:

How is it that hardly any major religion has looked at science and concluded, ‘This is better than we thought! The universe is much bigger than our prophets said, grander, more subtle, more elegant? Instead they say, ‘No, no, no! My god is a little god, and I want him to stay that way.’ A religion, old or new, that stressed the magnificence of the Universe as revealed by modern science might be able to draw forth reserves of reverence and awe hardly tapped by the conventional faiths.

This entry was posted in Book Notes, Lunacy, Religion, Science. Bookmark the permalink.