Here’s something I don’t usually do. But perhaps it’s worth doing, especially for this past year.

What were the significant events of this past year, in my personal life and in the history I’m living through?

I had a heart transplant! I’m still alive! I have a supportive family, and a step-grandson who just turned 1-year-old in October. And I am making visible progress toward a couple three long-term goals, even though I’m not optimistic about ever finishing any of them.

Here am I, the grandson, my partner, and the grandson’s parents (partner’s son and his wife): 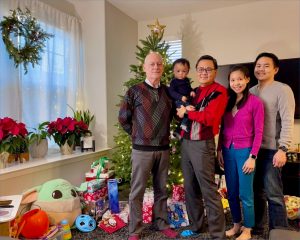 At the public level, two major stories stood out.

⦁ Trump supporters laid siege on the Capitol on January 6th, trying to prevent the presidential election from being certified for Biden, and almost no Republicans seemed to mind; in fact there are ongoing efforts in several red states to manipulate the integrity of voting, through gerrymandering and voter-restriction laws, in order to swing the 2024 election back to Trump.
⦁ Vaccines for Covid became available, and a significant portion of the population (many or most of them Trump supporters) denied their efficacy in favor of crackpot cures, or maintained various bizarre conspiracy theories to deny the existence of Covid itself.

These will go down in history. We lived (are living) through them. Things keep getting a little worse each year. Many commentators see these two events as omens of very bad things to come. It’s hard to see how the millions of followers of Trump will ever come to their senses, or whether they will withdraw themselves into red state bubbles.

I will quote from a Fb post by Carl Freedman from today, coincidentally quite apt.

From the Book of Revelation to the latest blockbuster at your local multiplex, Western civilization has been haunted by the spectre of sudden, catastrophic civilizational collapse. But these stories are fiction: not the way that bad things happen in real life (the volcanic destruction of Pompeii is an exceedingly rare exception). Historically, civilizations do not collapse: They decline–gradually, with extreme complexity, unevenly, and nearly always with a great deal of continuity between “before” or “after”. Not only did the “fall” of the Roman Empire unfold over centuries: Much of the Roman Empire continues to exist to this day.

The US seems to be in such a decline.