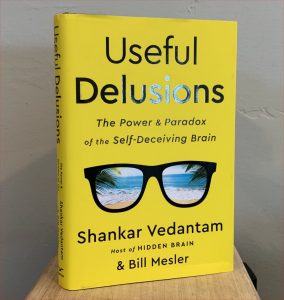 Here’s a book I read recently, just a week or so after returning from the hospital in late June, and which I’ve skimmed again in the past week to take notes and write up this summary. It’s one of two I read around that time by authors who are also media personalities. Shankar Vedantam runs a podcast called The Hidden Brain, and for a while (though I haven’t heard him there recently) was a special correspondent on NPR, IIRC in the mornings on All Things Considered. (The other book, which I’ll cover shortly, is by Fareed Zakaria, host of a CNN show and a guest columnist for the Washington Post.)

Vedantam’s book is another in a line of books in recent years about how our perceptions and cognitions are molded by the evolutionary priority of survival, and not accurate perception of the “real world.” It’s also a book that resembles various pop-psychology books, like those of Malcolm Gladwell, in that it presents a thesis upfront and then illustrates it with various case studies, some of them anecdotes about individuals, some of them results of psychological experiments.

This dovetails with my thesis that people not only aren’t rational most of the time, they don’t *need to be* rational to get along and survive; they can rely on the instinctive protocols of basic survival, which value tribal identities and superstitious hypotheses about the world, rather that rational understanding of the world.

Personally, I’m interested in sidestepping the mind’s illusions, peeking around the corner so to speak, and see what reality is really like. (And this, at its best, is what science fiction is about.)

Of course these themes have run through prior books over the past decade or more. Jonathan Haidt contrasts the “elephant” and the “rider,” where the latter is the rational part of the mind yet has only limited control over the irrational part, which makes decisions on emotional grounds. Matthew Hutson’s book invites us to recognize the various kinds of magical thinking we are subject to, and to welcome them, even use them judiciously, to make us happier.

For the rest here are relatively brief summaries of the remaining chapters. (Which as I type I can’t help expanding to include salient points and pertinent quotes.)

Ch4 has as its epigraph the famous Shakespeare line: “There is nothing either good or bad, but thinking makes it so.” (p.45)

Inspired by this book, I found my copy of Sam Harris’ short book Lying, and have now breezed through it once. He makes points that contradict Vedantam’s. I’ll reread again it more closely and post about it here soon.

*Dan Ariely wrote one of the earliest books about self-deceptions and mental biases, Predictably Irrational: The Hidden Forces That Shape Our Destinies (2008), which I summarized here back in 2019.