The Greek composer Vangelis (born Evángelos Odysséas Papathanassíou), best known for his scores for the films Chariots of Fire and Blade Runner, died today. He was likely the best-known “electronic” / “synthesizer” composer of all time, chiefly for his film work.

I discovered his music as it was used in the 1980 TV series Cosmos (review of book and series here). It repurposed tracks from several of his earlier albums (he did not compose music especially for the series, as some imply), especially the title track, “Heaven and Hell,” and a track called “Alpha” from the album Albedo 0.39, which was effectly used twice in the series over an animation of evolution:

The same music from the original album is at https://www.youtube.com/watch?v=3kK_HGNOo9A

I subsequently tracked down his albums available at the time, on LP of course (later replaced by CDs). Several of these early albums were scores for French films, including the first, L’Apocalypse des animaux, and the best of this group, Opera Sauvage, whose tracks included “Hymne,” famous as the (reorchestrated) music for Gallo wine commericals in the 1980s, and L’Enfant, used as the theme for the 1980 Winter Olympics, and in the film The Year of Living Dangerously.

The first track of Ignacio is especially beautiful, and spare. And Soil Festivities is essentially ambient music about a building storm: from a drip-drip-drip motif, to a two-note motif, then three notes, and so on. Beautiful. 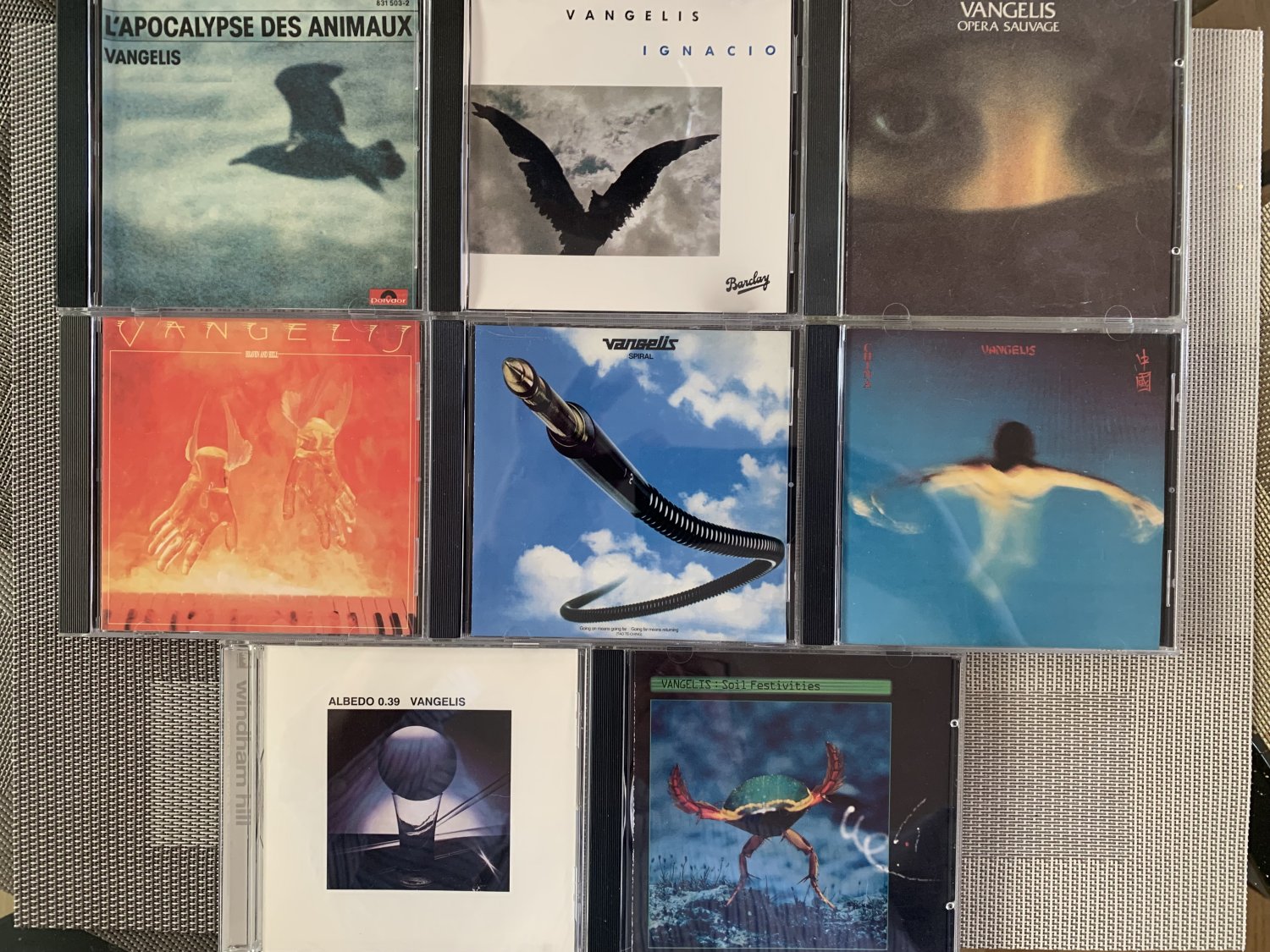 Cosmos was the key, it seems; it brought the composer to the attention of Hollywood, and relatively quickly, he did the score for Chariots of Fire, still electronic, but full-bore, with a grand theme. Vangelis’ themes were still simple, but he knew how to build them up, how to affect the listener emotionally.

In contrast, his score for Blade Runner is likely still his most famous, but it was rather oddball. Very different from his earlier work; very moody; yet dovetailing neatly with a track, the subtle “Memories of Green,” from his 1980 album See Your Later. The score had the famous “love theme” in which a trumpet (apparently) plays a, again very simple, theme, in a way that may or may not be the composer’s synthesizers. Yet in complete contrast, the end credits music is an aggressive treatment of (another simple, descending four-note) theme, repeated over and over in descending sequences, with increasingly elaborated ornamentation, that leaves you feeling glorious. Perhaps the sugar after the bittersweet ending of the film; he knew what he was doing.

I had been planning to write up my thoughts about Vangelis eventually, so today gave me a chance to start. I’ll finish in another post. For now, here are some YouTube links to some of his best scores (aside from Blade Runner).

This entry was posted in Music, Personal history. Bookmark the permalink.