Musings: The Sky; Living in History 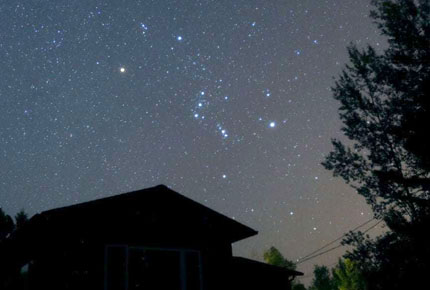 For all my years as an amateur astronomer in my teens (sometimes sleeping outside to wake up before dawn to see a different huge swath of the night sky than what was visible the previous evening), and my education in astronomy and physics as an adult, I had a thought recently that had never occurred to me before. On any given night, if you stay up all night, aren’t you able to see much more than half of the dark sky? More like 3/4 of the entire sky, or more?

My thought process is this. At any given moment, the sky you can see (let’s assume that the sky is completely clear of clouds) is everything above a plane tangent to your position on Earth at that moment. By an hour or two after sunset, when the sky is dark, that tangent plane is tipped only a little bit away from the direction to the sun. (It’s not like the sun is still spilling over your view above that plane, all the way until midnight.) As the hours go by, just before dawn, that tangent plane is tipped only a little bit, the other way, from the direction to the morning sun. Imagine the swatch of sky covered by those two angles. Certainly much more than half the sky.

At the same time, while I imagine this is good news for amateur astronomers willing to stay up all night, it doesn’t likely play into the planning of Earth-based telescopes. They need to plan observations that will last as many hours as possible (their telescopes swivel gently to track particular objects in the sky as the Earth rotates beneath them). So they, I’m thinking, need to focus on something in the dark sky as far away from the sunset as possible, in order to see it for as many hours possible before they leave off when the object is as far away from the sunrise as possible. And what that interval might be? That, I would guess, is 12 hours of less.

I’ve had this thought again and again. This is partly about journalism, and how we consume “news.” But mostly about whether “news” is really important, and how many people really care about it.

For all that seemingly momentous events regularly occur — recently, the threats of the Supreme Court overturning Roe v. Wade, and the Buffalo shooting seemingly inspired by right-wing “replacement theory”.

For all that newspaper and online commentators react, how many ordinary people notice, or care? Not very many, I suspect.

So what does it mean to say we are “living in history?” Only a very few of us are aware of the momentous events that will having lasting consequences. (For the record, two years ago in the early stages of the pandemic, when lockdowns were going into place, I posted on Facebook, “We’re living in history”. In this case at least, I could tell. I’ve read history.)

But most people living their day to day lives don’t notice the historical things that are happening around them. It’s always been true. In fact history is a story written by people looking back, who can identify events that changed the world, even if most people at the time didn’t notice.

But then, *most* people live their daily lives and don’t pay attention to anything outside their day to day existence. Not the history they’re living in, not science, not history, not any awareness of how they came to be in the place where they are, or how people different from themselves came to live their lives. And that’s how it should be. That’s how the race will survive. The intelligent people can observe, but when they try to manage, they overthink things.

\\
And here again is that song from the 1990s when there was so much optimism in the world.

This entry was posted in Science, Social Progress. Bookmark the permalink.