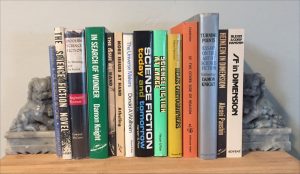 Beginning December 2017, I’m revisiting (or visiting for the first time) some of the early works of SF history and criticism.