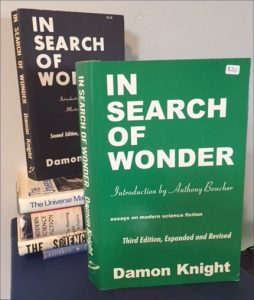 Damon Knight was perhaps the earliest knowledgeable critic of science fiction. He was a science fiction author himself, beginning in 1948, and is most famous for a couple early short stories, “Not with a Bang” (1950) and “To Serve Man” (1950), the latter made famous by its adaptation into a Twilight Zone episode. (Notable later stories included “Four in One” (1953), “The Country of the Kind” (1956), “Stranger Station” (1956), “Masks” (1968), and my favorite, “I See You” (1976).) He wrote novels too, though none quite as notable as his short fiction. Knight’s greatest impact on the science fiction field, aside from his critical work, was as an anthologist; he edited the earliest series of original anthologies, ORBIT, 21 volumes from 1966 to 1980, and produced several volumes of classic SF and fantasy stories, compiled at sfadb.com here.

Knight made his critical reputation in 1945 with an essay that assaulted the works of A.E. van Vogt, author of popular novels SLAN and THE WORLD OF NULL-A, by pointing out that they were badly written and incoherent, as he explained at length.

(We met van Vogt in the critical anthology OF WORLDS BEYOND, summarized here, where he described his kitchen-sink method of writing.)

Knight went on to establish, in 1952, a “credo” for his work, of which the third point is the most essential, quoted here in full rather than paraphrased:

This third point was controversial, because it declared that Knight was not writing magazine reviews like those common at the time, in which the reviewers generally liked pretty much everything. Knight was stating he had no problem calling out bad work. He wrote critical essays for various publications, throughout the 1950s and ’60s, and these essays formed the first edition of this book, with later editions adding some later items.

It wasn’t until I reread the book just now that I appreciated why that third point was so controversial, and why the magazine reviews of the time were so mild. It was this: there simply weren’t very many SF books published in those days. (Recall the counts presented by Anthony Boucher in Bretnor’s MODERN SF, discussed here; 20 or 30 books a year, total!) And because there weren’t very many, it would have been ill-mannered to criticize any of them, like criticizing a member of one’s own family, especially since there was no shortage of outside critics dismissing science fiction as sub-literary. Indeed, Knight immediately in this essay presents an example, a 1953 essay in Harper’s Bazaar by none other than Arthur Koestler, called “The Boredom of Fantasy.”

The majority of IN SEARCH OF WONDER’s 33 chapters consists of essays about particular books, demonstrating Knight’s impatience for bad writing and bad science, and also revealing why he admires, to one degree or another, the work of many authors—especially Heinlein, Sturgeon, Kornbluth, to some extent Asimov, Clarke, Blish, Pratt. His essay on van Vogt is included, as is one on Ray Bradbury, titled “When I Was in Kneepants,” whose thesis is that Bradbury doesn’t write SF at all, how his ‘imagination’ consists merely of borrowed backgrounds, how his one subject is childhood.

There are also occasional essays on other topics:

This last chapter illustrates an irritant of the entire book: how it’s a mish-mash of pieces originally written in the 1940s, the 1950s, into the 1960s, as late as the 1980s, rearranged by topic and then divided up thematically into chapters. But the perspective, as in the last chapter, sometimes shifts, jarringly, and occasionally you can’t be sure from when he is writing. A complex Acknowledgements section at the end of the book, describing how portions of this or that chapter were first published in this or that year, helps a bit. I think a better approach would have been to tag each chapter, or each portion of a chapter, with an unobtrusive but clarifying tag, a year in brackets, something like [1966:].

Here are some other points from the essays on particular books that especially struck me:

Finally, I can’t help but include some the Knight’s examples of bad writing and scientific ignorance, both to illustrate the kind of things that Knight took issue with, and to illustrate how bad some science fiction books of the ‘40s and ‘50s were, by contemporary standards.

He quotes samples of Van Vogt’s prose, on p68, from which I’ll reproduce just some short ones:

“His mind held nothing that could be related to physical structure. He hadn’t eaten, definitely and unequivocally.”

“His brain was turning rapidly in an illusion of spinning.”

“There was a drabness about his surroundings that permitted thought.”

From a book by Roger Lee Vernon (Chapter 23), bad science.

“In the early days numerous ships had been torn into ribbons by meteorites. Ships would fly into a bed of the rapidly moving objects and be filled with holes. Now the gravitation locator solved all such problems… This device spotting and accurately charted the course of every particle… when the object was still about three minutes away.”

Knight then describes how the ship is said to move at L7, seven times the speed of light, and then how a character claims that if an alien ship is more than 8000 miles away, it would be undetectable. These numbers don’t add up. (But they anticipate Lost In Space-style astronomy and physics.)

From a book by Austin Hall and Homer Eon Flint (Chapter 4):

“For years he had been battering down the skepticism that had bulwarked itself in the material.”

“There was a resemblance to Rhamda Avec that ran almost to counterpart.”

Knight says this about Hall, who wrote most of the book in question:

His knowledge of science, if he had any, is not discoverable in these pages. He used “ether,” “force” and “vibration” interchangeably. On p.85, a chemist refers to a stone’s thermal properties as “magnetism.” “Magnetic”—like “sequence,” “almost,” “intrinsic,” “incandescense” (sic) and “iridescense” (sic)—is a word Hall kept tossing in at random, hoping to hit something with it eventually. For example:

“She [a dog named Queen] caught him by the trouser-leg and drew him back. She crowded us away from the curtains. It was almost magnetic.” (P. 95)

In the chapter about Campbell, he describes a work by Nat Schachner in which a spaceship is described in terms of ocean liners, complete with the scrubbing of decks and swervings of courses and constant rocket fire to maintain a steady speed.

There are lots more. Part of the pleasure in reading this book, aside from admiring Knight’s critical acumen, is to read these many examples of bad writing and bad science, and to conclude that the genre really has improved greatly over the decades, and maybe some of those outside critics of the field, back then, who dismissed SF as sub-literary, were perhaps somewhat right.