Peter Watts essay: “Understanding Sarah Palin, or, God Is In the Wattles”: Summary and Comments 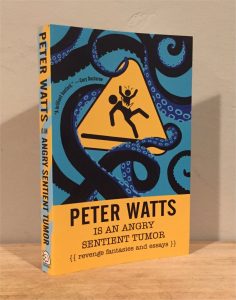 From the book Peter Watts Is An Angry Sentient Tumor: Revenge Fantasies and Essays (Tachyon, November 2019), a selection of posts from the blog of Peter Watts, which has been running since 2007. Watts is the noted author of high concept, hard SF novels like STARFISH and BLINDSIGHT. His blog ranges over many topics, from movie reviews to political commentary. I skimmed the book on a rainy afternoon a couple days ago, reading some chapters completely and getting at least an idea of the others. (I needed to decide if I would recommend it for Locus’ Recommended Reading List, and I will.) Two or three chapters struck me as particularly interesting given my themes here (being summarized on my new “Principles” page recently), and the most interesting one is worth summarizing and commenting on. And since the book chapters are all from the blog, they’re all online — you can easily read the entire original post if you like.

Understanding Sarah Palin: Or, God Is In The Wattles

Here’s a question for you. Why hasn’t natural selection driven the religious right to extinction?

[[ Right away, I’m eager to see what he has to say. My tentative conclusion has been that survival is not about accurately perceiving the real world; it’s about social cohesion, and shared beliefs, no matter how absurd, build that cohesion. In fact the ‘cost’ of holding especially absurd beliefs works especially to prove dedication to the group. ]]

The post/chapter goes on with recourse to psychology, including the now-famous Dunning-Kruger effect (in which dumb people are too dumb to realize how dumb they are, and actually think themselves pretty smart; world-famous example is an exercise for the reader). Watts even anticipates my comment just made:

You might suggest that my analogy is a bit loopy: young-earth creationism may fly in the face of reason, but it hardly has as much immediate survival relevance as my own delusory immunity to gravity. I would disagree.

…with examples of the Church denying scientific findings, and noting that fundamentalists tend to be climate change deniers.

Evoking group selection, Watts wonders why there aren’t more societies driven by empiricism; “why are god-grovellers so powerful across the globe?”

The great thing about science is, it can even answer ugly questions like this. And a lot of pieces have been falling into place lately. Many of them have to do with the brain’s fundamental role as a pattern-matcher.

[[ To cite the three-nature model of human nature from the Van Schaik & Michel (VS&M) book The Good Book of Human Nature: A Evolutionary Reading of the Bible in my previous post: Here we are back to first nature tendency to see agency everywhere, and the propensity to detect patterns – bunnies in clouds, the Virgin Mary in a tortilla – even when none exist. The cost of false positives (superstitions) is less than the cost of false negatives (death). That does not mean that the false positive patterns are real, or meaningful. ]]

[[ I did not know this last point! I knew about the dumb people not realizing how dumb they were part, and how they overestimate their own intelligence. But dumb people think smart people are dumb? But after a moment, I understood completely. The idea recalls something conservative firebrand Ann Coulter once said: why can’t liberals just make up their minds? [paraphrasing from memory]. The idea dovetails with the oft-repeated sentiment (see my Quotes page) that “The whole problem with the world is that fools and fanatics are always so certain of themselves, and wiser people so full of doubts.” That is, some people, driven I would think by [to use VS&M’s terminology] first nature thinking, with second nature justification, think all problems are simple matters of good or evil, black or white, and that the answer to any question is simple and obvious. Never mind that third nature thinking (like science) might show that cognitive biases and perceptual illusions are misleading them, because those first two natures are suitable for survival but not for perception of reality. These people wonder why the third nature folks see uncertainty in everything, and thus think them the dumb ones. ]]

Watts summarizes, and then concludes:

Therefore (I would argue) the so-called “right wing” is especially predisposed to believe in moralizing, authoritarian Invisible Friends. And the dumber individuals (of any stripe) are, the more immune they are to reason. Note that, to paraphrase John Stuart Mill, I am not saying that conservatives are stupid (I myself know some very smart conservatives), but that stupid people tend to be conservative. Whole other thing.

[[ I’ve made this last stipulation myself, e.g. along the lines of noting that racists are usually conservatives, but that doesn’t mean all conservatives are racist. ]]

Next, Watts cites studies about the origins of religion. People are less likely to cheat if they think someone is watching them. Even a poster of eyes above a donation jar; even an imaginary god. Thus religious communes last longer than secular ones. Acts of charity are matters of social optics: who sees that I’m being charitable? How religion is more common in areas with water and resource shortages. [[ This dovetails with VS&M’s notion that the reason the formidable legal codes of the Torah evolved where it did, and not anywhere else. ]]

And therefore the idea that the cost of religious commitment, even to crazy ideas, validates membership in the group. And here we get to chicken wattles: they may seem purposeless, but in fact they are signs of health, as are peacock tails. Religious communes impose many more costly requirements than others. Watts emphasizes this point:

It’s not the ideology per sé that confers the advantage; it’s the cost of the signal that matters. Once again, we strip away the curtain and God stands revealed as ecological energetics, writ in a fancy font.

And so the power of Palin and her followers, to quote Watts’ bullets:

Watts ends by wondering, now that we understand all this, what are we going to do about it?

In the original post, but not in the book chapter, is a coda from a couple days after the initial post:

And as the tide turns, and the newsfeeds and Youtube videos pile up on my screen, the feature that distinguishes right from left seems ever-clearer: fear. See the angry mobs at Republican rallies. Listen to the shouts of terrorist and socialist and kill him! whenever Obama’s name is mentioned. And just tonight, when even John McCain seemed to realise that things had gone too far, and tried to describe the hated enemy as “a decent man”— he was roundly booed by his own supporters.

…These people are fucking terrified.

Indeed, that’s been my impression for some time. Look at the anger, and fear, evident in the rantings of right-wing talk show hosts; and just recently, look at how the Republicans in the impeachments hearings last week engaged in non-stop yelling. (In contrast to the cool, reasoned attitudes of Schiff and Pelosi; or on TV of Rachel Maddow, who’s usually just amused and bemused by the antics of the conservatives, but not angry.) While it’s dangerous to generalize, again: the people who are primarily motivated by first nature thinking and feel threatened in any way, are conservatives.