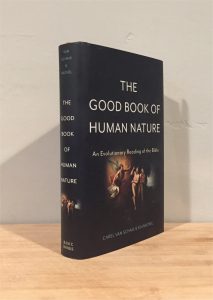 This is a fascinating book because it describes how there really is some rationale (if not reason or logic) to the stories in the Bible. It’s a set of answers to the general question, a sort of meta-question that one can ask about any kind of story—why is *this* story being told, and not some other? And why does the story end *this* way, and not some other way? Remember, they’re stories! The answer is not that they’re literally true, let alone the dictation from some omnipotent being. Even if remotely based on real events, the reality is that the early books of the Bible were transmitted orally for centuries before they were written down – and then the versions that were written down were, ahem, edited by the folks in 300 AD or so who decided which parts went into their anthology, and which others were deemed apocryphal or blasphemous. And stories grow in the telling.

This is a detailed book that I’ll likely not finish until I finish reading and rereading the Bible itself, over the next year, so for this post, just a summary of the 25 page introduction. I’ll alternate my comments with summary.

The Bible documents humanity’s cultural evolution. We can understand this with awareness of recent finding in cognitive science and evolutionary biology. Its odd stories began making sense with this perspective.

In the Bible we find answers to humanity’s greatest questions. We do not mean this in a religious sense. Rather, it teaches us why we fear death, how we deal with misfortunes, and where our deep-seated desire for justice originated. The Bible shows us how we learned to survive in large, anonymous societies, why our modern lives sometimes seem so pointless, and why we are so often nagged by what we would describe as a longing for Paradise.

The gist of their theme is this: We understand that some 10-12,000 years ago, as the last great ice age ended, humanity ‘invented’ agriculture. The agricultural revolution. This led to the formation of fixed villages, towns, and eventually cities. But humanity had spent hundreds of thousands of years as hunter-gatherers, in small tribes with no fixed locations. In these tribes everyone knew everyone else. Based on evidence of the few remaining hunter-gatherers that still exist around the world, these tribes were remarkably egalitarian; everyone shared tribal chores. But being stuck in one place, to grow crops, changed everything. Among the effects: close contact with animals brought about new diseases, whose causes were unknown (and so of course ascribed first to spirits and then to gods). Investment in land required the stability of a family line, leading the primogeniture, with the eldest male inheriting everything, instead of the equal distribution of the estate you read about in some of the early Bible stories. With the men at home, women became commodities, traded like any other property, and thus the subjugation of women.

And so on. The early Bible stories reflect these issues and describe how they were solved, and even if these issues had been around for thousands of years, they were still the most important stories to be told, long enough until they were finally written down.

The grand achievement of this primeval history was the creation of law—Leviticus—all the rules to follow to avoid conflict, to prevent diseases, and so on.

(Of course those rules were created for desert tribes with no electricity or plumbing, with no knowledge of the outside world. To follow those rules now would be, mostly, silly. Yet some people still find the simplicity of an ancient list attractive, so they don’t have to think about the realities of modern life.)

(I’m wondering if in this book there is any acknowledgment that this is only one strand of primeval history. Other cultures, especially in Asia, must have gone through analogous phases. Perhaps we simply don’t know that history? Or people in the West ignores those histories?)

Why should the current authors be the first to take this approach to the Bible? Because Biblical studies have been carried out in isolation, and with little knowledge by the public; because the study of religion as an aspect of human nature is relatively recent; because of the tensions between religion and science, especially in the US. (Mentions of Steven Pinker, Marvin Harris, Robert Wright, John Teehan.)

We understand now that the evolutionary history of humanity left us with emotions and behaviors adapted to a world that has since disappeared. The single greatest change in the behavior of any species on the planet has been humanity’s adoption of a sedentary way of life. This event, the Neolithic Revolution, has been called “the worst mistake in the history of the human race” (in Jared Diamond’s GUNS, GERMS, AND STEEL). It was certainly a decisive turning point in human evolution: the species has since exploded across the planet. The initial costs were shorter lifespans, more violence, more disease. Scourges that required explanations. And strategies for avoiding them.

I should mention that Isaac Asimov, in his two volume GUIDE TO THE BIBLE in the late 1960s, frequently invokes the perspective of pre-history following the ice ages, the tensions between early farmers and herders, and the effect natural catastrophes might have had on the development of Biblical stories. But the authors here go much further, given recent developments in cognitive science, evolutionary biology, etc.

Brief history of the Bible. Beginning in the 17th century it became understood that the first five books, traditionally ascribed to Moses, could not have been written by him – too many references to things past his time. The observation that some passages refer to Elohim and others Yahweh (“God” vs. “LORD God” in KJV) enabled the reconstruction of separate original sources, at least four, that were stitched together (likely during the Babylonian exile) to form Genesis. The Hebrew Bible (the OT) was composed from roughly 900-100 BCE, from multiple sources and under varying influences.

The first nature is our innate feelings, reactions, and preferences that evolved over hundreds of thousands of years as hunter-gatherers. These include love between parent and child, a sense of fairness and outrage at injustice, a fear of strangers, a concern for reputation, feelings of obligation and jealousy—and the tendency to see supernatural actors at work everywhere.

Cultural evolution created a second nature that is learned; it varies from culture to culture. These are traditions and customs, religion as a cultural product, and rules of decency, politeness, and good manners.

Our third nature reflects our rational side. These are conscious practices and institutions that enable analysis of a given situation. These are generally taught in schools, and result in all the practices we know are good for us but balk at doing: eating healthily, exercising, not drinking and driving, etc. This third nature comes into play when we face new challenges and old mechanisms to solve problems no longer work.

Our third nature now keeps the world running. But our first nature reactions often conflict, resulting in ‘mismatch problems’ in modern life. Third nature self-discipline is a limited resource. Example: a married woman falls in love with another man. First nature: “love!” Second nature: “fidelity!” Third nature: “think of the mortgage, the lawyers’ fees!” p24. (Monogamy is absent from many parts of the Bible; even that was a second nature development to solve problems brought about by the sedentary life.) Our second and third natures help us survive, but don’t necessarily make us happy. And anytime our gut nature is unhappy, we are detecting another of those mismatches between our evolutionary heritage, and modern life.

This entry was posted in Bible, Book Notes, Evolution, Religion. Bookmark the permalink.