Le Guin, NO TIME TO SPARE 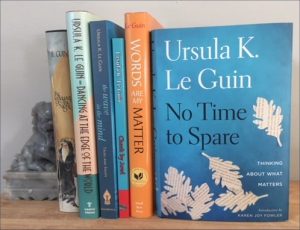 Ursula K. Le Guin, NO TIME TO SPARE: Thinking About What Matters (2017)

This book is a collection of the best blog posts Le Guin did on her site at http://www.ursulakleguin.com/, from 2010 until her death in early 2018. It was published in December 2017, and won the Hugo Award in August 2018 as Best Related Work (i.e., a nonfiction book about science fiction or fantasy) of 2017. One has to acknowledge that the award was something of a sympathy vote, for while it’s a charming book with many wise thoughts, very little of it is about science fiction or fantasy specifically. The title echoes her reflection on her age, and about a questionnaire that asked what she did in her ‘spare time’. As a full-time writer, she’s constantly busy with “daydreaming, with doing business and writing friends and family on email, with reading, with writing poetry, with writing prose, with thinking… None of this is spare time. I can’t spare it… I’m going to be eight-one next week. I have no time to spare.”

Still, Le Guin is one of science fiction’s greatest writers, and she applied her talent not just to science fiction and fantasy, and it’s well worth spending time sampling her wisdom in this book.

The introduction is by Karen Joy Fowler – note p xiv – xv, “In another essay, in another book, Le Guin has said that so-called realism centers the human. Only the literature of the fantastic deals with the nonhuman as of equal interest and important. In this and so many other ways, fantasy is the more subversive, the more comprehensive, the more intriguing literature.” [[ I’ll have to track down that essay. I agree with this to a point – but think it is science fiction that deals with the nonhuman as of equal interest, and fantasy that more often indulges in human interests and priorities in an indulgent way. ]]