Just a couple years ago (as I set up this page in early 2020) I went through the box of loose documents and print photographs I’d inherited from my father, nearly 20 years ago, and discovered three high school yearbooks I hadn’t remembered ever seeing before. These were my parents’ yearbooks from their years in Cambridge, Illinois, attending “Cambridge Community Unit School” as it was known then. Cambridge was and is a small town, so class sizes were not big—a couple dozen at most. Still, these are fascinating not just for the earliest photos of my parents I’ve ever seen, but for how many activities they were involved in. 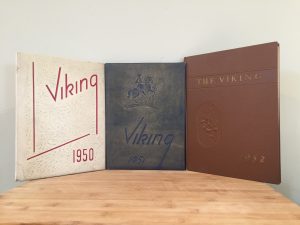 Then, the frontispiece photo from one of them of the school itself.

I was surprised to see that this school existed in 1950. Years later—actually in early 1968—I attended this school for three or four months, in the interval during our move from California to the Chicago area when my mother and siblings lived in town with my grandfather, until school finished. (I finished the 7th grade there. Later over that summer, the whole family moved into a suburban Chicago home.) It struck me as a modernist building at the time, and I would have thought it recently built. In 1968, at least, the original high school, a courthouse-like building in the center of town, was used as the elementary school. I can’t find info anywhere about when the newer high school, at the southwest corner of town, was built. The cars in the photo are clearly 1940s models.

Next, a class photo of the Class of 1951. My father is top row, second from right. This would be the Junior class.

Here’s another class photo from the Yearbook. Here my father is third row, far right. 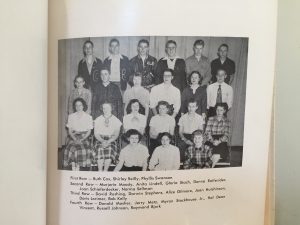 From the same Yearbook, a photo of the Sophomore class. In this photo my mother, Helen Pierce, is in the third row, second from left. 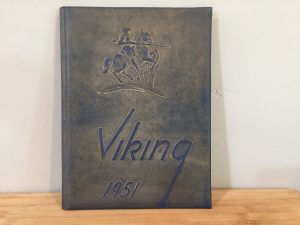 My father graduated in May 1951, a few months shy of 18 years old. Each senior gets a larger photo. 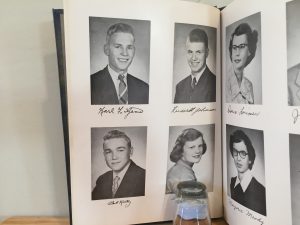 Later in the Yearbook are credits for each student, i.e. what extra-curricular activities they participated in. I assume the numbers are the years of high school, from Freshman to Senior. 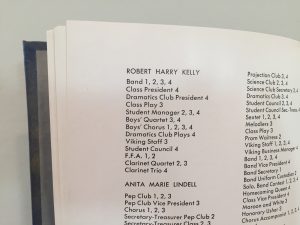 How busy they must have been! And class president!

Here the Junior class from the same year. My mother is middle front row, sitting on the floor. Note the fashionable scarf. 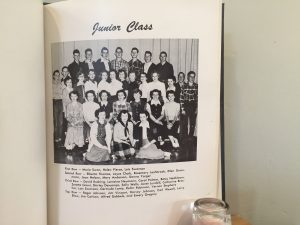 And then that year’s Sophomore class. Two of my uncles are here. In the third row is Bruce Kelly, my father’s brother. (He was later a high school shop teacher in Des Plaines, IL, and had three sons.) And in the back row center is Robert Pierce, my mother’s brother. (He later lived in southern California and traveled the country inspecting nursing homes, among other jobs.)

My father was the boys’ quartet: the box I mentioned had a glossy print of the photo used in the yearbook. 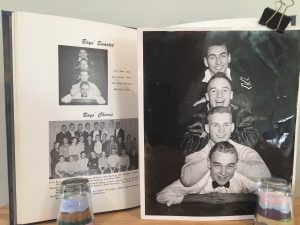 Finally the 1952 Yearbook, the year my mother graduated. 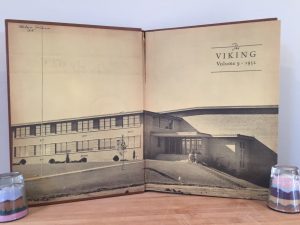 Here’s her senior picture. The description reads “So smartly dressed, and quite in style; she has a pleasing, winning smile.” 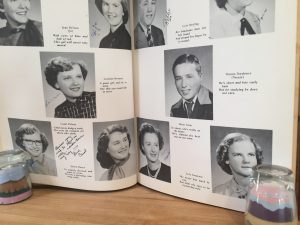 Here’s the page listing my mother’s activities as a senior:

And here is my mother as Homecoming Queen. And in this year’s Junior Class Photo are my two uncles. 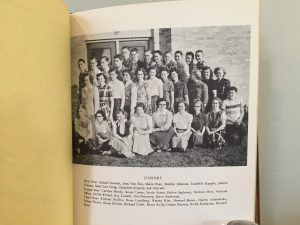 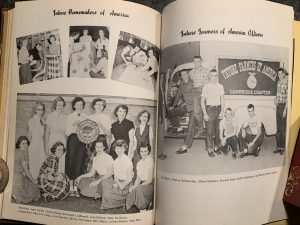 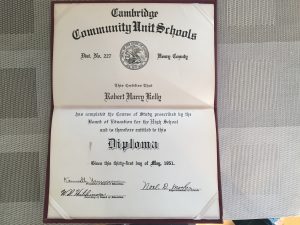 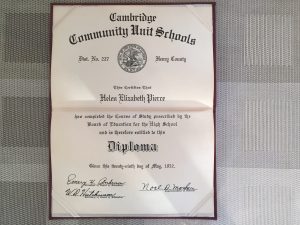