Follow-up to previous post: about the film Don’t Look Up. 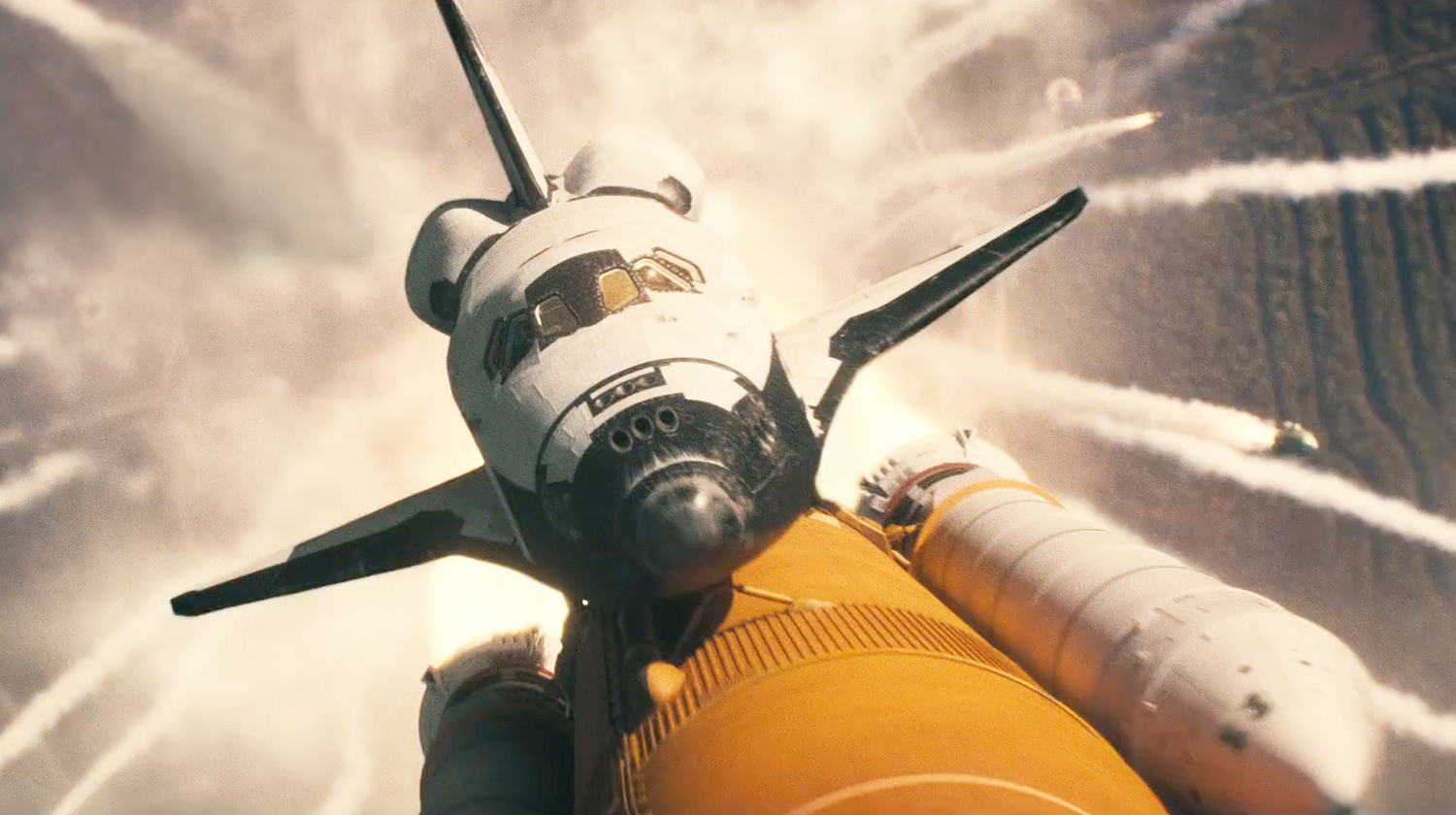 So, I give the film a thumbs-up, even though it’s uneven. It follows through on its premise. It effectively parodies the denialist nature of the anti-vaxx crowd, with a crucial difference.

The best scenes, in fact, are right after we resumed watching it last night, i.e. about 45 minutes from the end. News of the approaching comet has been floating for months. An ambitious tech CEO, played by Mark Rylance as an autistic genius who can’t look people in the eye, finances a plan to divert the comet — and then abruptly recalls the mission.

(Another technical issue: the film impressively shows a space shuttle taking off from the Florida coast along with, simultaneously, several dozen smaller rockets, presumably carrying with nuclear bombs. (As seen in the photo above, from the shuttle’s perspective.) The launches are visually impressive, but would be a logistical nightmare — trying to monitor so many launches at one time.)

This confuses the public further. We learn the CEO has learned that the comet is full of rare earths, valuable minerals currently mostly mined in China, which, as it happens, would be extremely valuable for his cellphone industry. And the president promotes the new plan as bringing millions of jobs to ordinary Americans. (How? She doesn’t say.)

Anyway–eventually the public is fed up with this. They feel they’re being played, by the scientists, by Big Tech, by the government. Maybe there is no comet! And so a denialist streak emerges, culminating with stadiums full of people chanting “Don’t Look Up!” over and over. Because the people playing *them* want their paranoid resistance, lest anyone actually look up and actually see the comet.

The difference between the “Don’t Look Up” crowd in the film, and the Covid/vaxx-denialists in real life, is that the former aren’t driven by denial of the reality of comets. (The way medieval astronomers were certain the heavens were perfect and unchangeable.) They’re driven by mistrust of various kinds of authorities. In the film, though, the comet eventually becomes visible to the naked eye (as I described in previous post), and the “Don’t Look Up” movement collapses and people in those stadiums actually do look up and see the comet, increasingly larger, up in the sky.

Credit to the film: the depiction of the comet is much better than in previous films of this sort (years ago I wrote a blog post about the confusion in Hollywood films between comets and asteroids). Both in space, and in the sky; it does not show the comet streaking across the sky, visibly moving, until the very end.

Credit to the film: it plays its premise fairly. A comet is going to hit the Earth and wipe out all life. The CEO’s plan to break the comet up into manageable chunks, for mining those rare earths, fails. The comet hits. No magic bullet, no deus ex machina, appears.

Credit to the film: it nevertheless finds an amusing, and ironic, coda. And at the very end of the credit sequence — a coda to the coda.

So overall, it’s a good job, if uneven. It makes a lot great satirical points. I think its main flaws are that it’s a bit too long, and there are too many convenient yet implausible plot scenarios (as mentioned previous post) that betray its Hollywood protocols.

Another particular point: I appreciate its parody of the relentlessly cheerful TV news anchors. This is how most of them are, though I try to avoid watching local news, or even national news (like the Today Show) beyond the first half hour; sooner or later they become entertainment shows, not about taking anything in the news seriously.

I would actually watch the film again, if only to catalog all the specific points it tries to make, and which succeed and which fail. That’s just the kind of thing I like to do.

Quiet day today. Intermittent rain. We did a half-hour walk. Got a couple hours reading done (Shermer). Y home all day, of course. I compiled a list of the year-end best films (that I think Y might like seeing) — West Side Story, The Power of the Dog, Belfast, etc. — and what platforms if any we could see them on. (WSS is only in theaters until late January, but all the others are online somewhere now, if for a price.) So this afternoon we watched a gay holiday Netflix (Hallmark-like) film called Single All the Way (Imdb), about two gay best friends from LA who visit the one’s family in New Hampshire over the Christmas holidays. It wasn’t bad; there was no obviously predictable story arc. Highlights: Luke Macfarlane, from the TV series Brothers and Sisters; and Philemon Chambers, who should be a super-model.

This entry was posted in Films, science fiction. Bookmark the permalink.