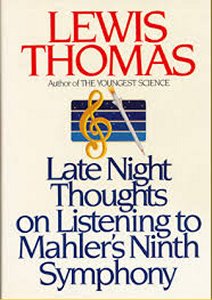 This was the third collection, published in 1983, of Lewis Thomas’s elegant, mostly short, essays, following The Lives of a Cell (which I blogged about last week) and The Medusa and the Snail. I read (or reread, I’m not sure) this volume over the past week.

The title essay isn’t about Mahler per se; it’s about how the author hears the final, melancholy, elegiac movement of this symphony, traditionally heard as an accepting, almost consoling acknowledgement of death, completely differently in this age – he’s writing in the early 1980s – of imminent nuclear doom. That’s the theme that pervades the book, in at least four essays. The opening essay, “The Unforgettable Fire”, is a review (in very relaxed sense) of two books documenting the horrors of the bombings at Hiroshima and Nagasaki, and Thomas’s flabbergasted outrage at the military planners currently anticipating the worst, as they busily maintain the latest nuclear arsenals. Another essay addresses how the medical community – the nation’s hospitals – will be of absolutely no use in such a conflict; the hospitals, in the major cities, will be gone first, and in any event the casualties will be so enormous there will be no possibility of helping any immediate survivors.

This was the early 1980s, and this sense of imminent doom, of a worldwide catastrophe to end them all, possibly the near-extinction of the human race, was still very much in the air. (A book-length consideration of the subject was Jonathan Schell’s The Fate of the Earth in 1982, which meditated at great length and in highly mannered prose how we got to that point and how awful awful it would be for the nuclear conflagration to happen.) I say ‘was’ in the air, since it isn’t so much now, compared to relatively localized incidents of terrorism, even though the potential threat is nearly as great, isn’t it? Don’t both the US and Russia (no longer Soviet Union) have nuclear arsenals? And several other countries? And if some terrorist organization manages to hijack even one bomb, couldn’t that trigger the end just as surely as a Soviet/US battle in the 1980s?

How is it possible for so many people with the outward appearance of steadiness and authority, intelligent and convincing enough to have reached the highest positions in the governments of the world, to have lost so completely their sense of responsibility for the human beings to whom they are accountable? Their obsession with stockpiling nuclear armaments and their urgency in laying out detailed plans for using them have, at the core, aspects of what we would be calling craziness in other people, under other circumstances. Just before they let fly everything at their disposal, and this uniquely intelligent species begins to go down, it would be a small comfort to understand how it happened to happen. Our descendants, if there are any, will surely want to know.

But the whole book is not like that, fortunately. As with two previous volumes of essays, most items here are short, as few as three pages, and address striking insights about the complexities of biology, the relationship of science and the humanities, and the urgencies of current issues concerning science and society. A few random notes and quotes:

A nice note to close on.

This entry was posted in Book Notes, Culture, Music, Science. Bookmark the permalink.