Reading Around the Bible, 1

I have never read any version of the Bible (or any other holy book), but over the years I’ve accumulated a couple versions of it, and several books about it. My parents were nominally Presbyterian, my mother sang in the church choir, and we kids (I was the eldest of four) attended Sunday school growing up. I decided I didn’t care to go any more at about age 15. But I still have the red-bound Bible, with fold-out genealogy pages in the center, given to me from the church in Reseda, California.

Recently, serendipitously, I noticed a glossy trade paperback in the gift shop at Andersen’s Pea Soup restaurant along Interstate 5, appearing to be a lavishly illustrated guide to the Bible. I glanced through it, noticing that it devoted several pages to each Biblical book, with summaries, sidebar discussions, and illustrations of art and photos of actual places, and lots of maps. (I love maps, and timelines.) It occurred to me that such a broad overview might be a way of easing into the Bible itself, at least of gathering an idea of its contents, before, or without, reading the ancient texts themselves. After all, the Bible is a foundational text of Western civilization and literature, aside from its roll as a religious text. So I tracked the book down on Amazon. 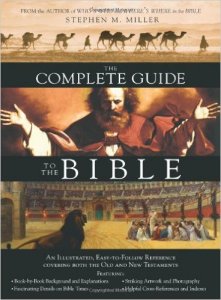 It’s The Complete Guide to the Bible, by Stephen M. Miller.

I bought the book and for the past month or so I’ve been working my way through it (I’m currently part way through the minor prophets) and several other books about the Bible already in my library. I have Isaac Asimov’s Asimov’s Guide to the Bible (in two volumes, one for each Testament); I have Richard Elliott Friedman’s Who Wrote the Bible?; and since starting Miller I’ve acquired Bart D. Ehrman’s The Bible: A Historical and Literary Introduction and John Riches’ The Bible: A Very Short Introduction (one of Oxford series of little paperback introductions on hundreds of topics), and two physical Bibles: the New Oxford Annotated Bible (4th edition, with the Apocrypha, which my unadorned childhood volume did not include) and Steve Wells’ Skeptic’s Annotated Bible (using the King James Version, and which is entirely online here, along with his annotations of the Quran and the Book of Mormon, but it’s handy to have a physical volume to consult).

Initial comments on these books:

I’d intended a very brief first post about Bible reading, but let me close with a few initial reactions.

But on the last point, a couple quotes from Steven Pinker’s The Better Angels of Our Nature, whose thesis is that violence has, in fact, greatly declined over recorded human history — and at my casual browsing of Biblical stories this past month, I can be persuaded by. His book opens with descriptions of violence in the earliest texts that survive– Homer’s epics, and the Bible. First about the authorship, p11.2:

Modern biblical scholars have established that the Bible is a wiki. It was compiled over half a millennium from writers with different styles, dialects, character names, and conceptions of God, and it was subjected to haphazard editing that left it with many contradictions, duplications, and non sequiturs.

And about the violence, p10:

The Bible depicts a world that, seen through modern eyes, is staggering in its savagery. People enslave, rape, and murder members of their immediate families. Warlords slaughter civilians indiscriminately, including the children. Women are bought, sold, and plundered like sex toys. And Yahweh tortures and massacres people by the hundreds of thousands for trivial disobedience or for no reason at all. These atrocities are neither isolated nor obscure. They implicate all the major characters of the Old Testament, the ones that Sunday-school children draw with crayons.

So why is the Bible upheld as a moral standard..?

I will have several more posts, I think, over the next few weeks, as I finish reading *around* the Bible, and then perhaps begin to read specific books.

This entry was posted in Bible, Book Notes. Bookmark the permalink.