The Science of Interstellar

Just finished reading Kip Thorne’s THE SCIENCE OF INTERSTELLAR, a big trade paperback with lots of diagrams and a few photos. Takeaways: 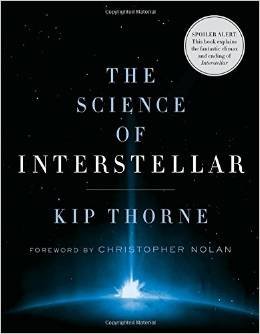 1) Thorne was one of the creators of the initial premise for the film, long before Christopher Nolan came along. (At one point Steven Spielberg was slated to direct.) Thorne’s collaborator was Lynda Obst, whose books include Hello, He Lied — and Other Tales from the Hollywood Trenches (1996).

2) Yes there’s lots of science informing the film, but much of it is after-the-fact, as Nolan and his brother rewrote earlier versions of the script and allowed Thorne to justify their new scenario as best he could. Thorne did push back on some points — famously, about not allowing the script to use faster-than-light space travel.

3) For example, Nolan dictated how much time should pass on the first planet, due to relativity, compared to the outside world — several years for every hour — and to justify it Thorne imagined a black hole of such parameters that it was just barely within the limits of physical reality.

4) Second example, to explain the ‘blight’ that affects the Earth (or at least the north american midwest, since there’s no hint in the film of what’s going on in the rest of the world), Thorne brainstormed over dinner with several Caltech biologists to explore ideas how such a worldwide catastrophe might happen. Thorne concludes with a rationale that is far-fetched, but barely possible (the idea of a worldwide blight). As I said in an earlier Fb post: the filmmakers should have gotten a bunch of science fiction writers in a room to brainstorm such ideas, e.g. Nancy Kress, Gregory Benford, Kim Stanley Robinson, David Brin, Robert J. Sawyer, and David Gerrold, to take the first few names that pop into my head, who have scientific and/or cinematic experience, and they could have come up with a far more interesting scenario than what we saw in this film.

No, there’s nothing in the book about ‘love’ as a physical force, or anything to justify floating ice clouds, and scant little about how enormous waves form on a planet with a knee-deep ocean (there is something about tidal forces and the fact that the planet is so close to the black hole — but still, apparently the idea came first, the rationale second).

And there’s nothing about the most peculiar passage in the film, early on, in which a school representative explains to Cooper (Matthew McConaughey) how the textbooks have been rewritten to explain that the Apollo moon-landings were a hoax. Say what? Yes, there are people who believe this, as there are people who believe that 9/11 and JFK’s assassination were government conspiracies, or that the world was created 6000 years ago, or who believe the world is flat, but of course their case, not just being an insult to the scientific and engineering prowess of our civilization, has been thoroughly debunked; so when I saw this scene, I thought, *why even bring this up??* To make a slight point about how contemporary culture in the film’s era has given up on overcoming challenges, spurring MM’s character into action? I can’t help but think that a certain fraction of the audience for this film will see this scene and have their suspicions reinforced, subtly, and come away with the thought that yeah the Apollo landings probably were a hoax, and all those other conspiracy theories, yeah there’s probably something to them too…

Still: Thorne’s book is fascinating, with glosses on the major developments of 20th and 21st century physics — relativity, warped time and space, black holes, wormholes, higher dimensions, our universe as a ‘brane’ within a higher-dimensional ‘bulk’, how gravitational ‘anomalies’ lead to advances (Einstein, dark matter, dark energy), singularities (not just one type but three), the tesseract, and whether time travel is possible via wormholes.

And cool details: all that scrawl on Professor Brand’s chalkboard (shown in this book on page 220), is valid stuff, written there by Kip Thorne himself, and represents equations with variable factors that Brand, and later the adult Murph, were exploring solutions for those factors and thus trying to solve.

Ditto sheets of data about evidence of life on the planets — they were written by experts in various fields of what real data would look like. I doubt any previous film in history has gone to such trouble to depict realistic fake evidence…

And there’s even some speculation about how, once Brand and then Murph ‘solve’ gravity, that knowledge could have ‘lifted’ colonies of survivors off the Earth. Though not how many were actually saved, and at what expense, as I wondered in my earlier Interstellar review.