Jonathan Haidt’s THE RIGHTEOUS MIND: Why Good People Are Divided by Politics and Religion, 1 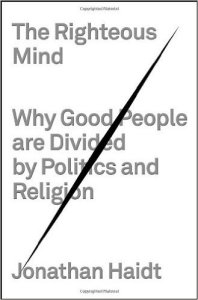 Jonathan Haidt’s The Righteous Mind: Why Good People Are Divided by Politics and Religion is a fascinating, insightful book. It uses psychological studies into moral sentiments around the world to develop ideas about the ‘foundations’ of morality, especially to expand the standard ‘liberal’ ideal that focuses on egalitarianism, with the idea that morality is all about care vs. harm and fairness vs. cheating.

Rather, he identifies these priorities with Western societies, those he calls WEIRD — Western, educated, industrialized, rich, and democratic. In other parts of the world — and he discusses his own studies in India as an example — other sentiments are just as important: loyalty vs. betrayal, authority vs. subversion, sanctity vs. degradation, and (added later, in his development of his hypothesis of “moral foundation theory”) liberty vs. oppression. And these priorities are present in conservative factions of even WEIRD societies. That is, he identifies liberals as sensitive to three (the first two and the last) of the six moral sentiments, and conservatives to all six, which leads him to conclude that conservatives have an advantage in American politics (even though, as he confesses, he was a lifelong liberal) because politicians have that many more ways of appealing to their values.

His goal is to understand these foundations in terms of evolutionary psychology and recently revived theories of group selection, ideas discounted for many decades by biologists but recently revived by E.O. Wilson and others, along several lines of evidence that the author describes.

He develops group selection ideas to identify humans as “conditional hive creatures”, in which humans operate separately but in certain situations — military duty, sports fandom, submission to psychedelic drugs, rites of passage — they find great joy in becoming part of a larger whole. This is how religion works, he says, contra the ‘new atheist’ critiques of religious beliefs themselves; religion is all about belonging, and religions themselves have been subject to group selection for the benefits clusters of beliefs provide to those groups.

And then he uses the understanding of the bases for the six moral foundations to examine several current political issues, and suggest how one or another set of moral foundations can offer resolutions: about corporations, regulations, markets, and the liberal threat to ‘moral capital’.

Just one quote for now, a concluding one. I have many more specific notes about the book, and how it informs (or does not) my own provisional conclusions, that I might post next week. (In particular, the sense in which Haidt does not in any way suggest any kind of ‘arc of history’ about morality.)

This book explained why people are divided by politics and religion. The answer is not, as Manichaeans would have it, because some people are good and others are evil. Instead, the explanation is that our minds were designed for groupish righteousness. We are deeply intuitive creatures whose gut feelings drive our strategic reasoning. This makes it difficult—but not impossible—to connect with those who live in other matrices, which are often built upon different configurations of the available moral foundations.

This entry was posted in Book Notes, Morality, Politics, Religion. Bookmark the permalink.