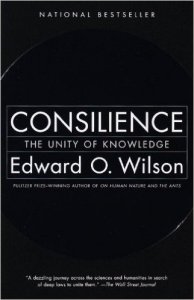 Chapter 4, “The Natural Sciences”, focuses on the nature of science and how scientists actually work.

The great divide among cultures on Planet Earth is not political, racial, or religious; it is the divide between the scientific and the prescientific. He evokes a comparison to “intelligent fish born in a deep, shadowed pool”, without the benefits of “the instruments and accumulated knowledge of the natural sciences” —

Wondering and relentless, longing to reach out, they think about the world outside. They invent ingenious speculations and myths about the origin of the confining waters, of the sun and the sky and the stars above, and the meaning of their own existence. But they are wrong, always wrong, because the world is too remote from ordinary experience to be merely imagined.

A powerful analogy, one that has appeared in science fiction, which I will eventually explore and elaborate.

Science is neither a philosophy nor a belief system. It is a combination of mental operations that has become increasingly the habit of educated peoples, a culture of illuminations hit upon by a fortune turn of history that yielded the most effective way of learning about the real world ever conceived.

And later defines it, p53m; Science is

the organized, systematic enterprise that gathers knowledge about the world and condenses the knowledge into testable laws and principles.

He explores themes that appear in his later, more recently read, book, The Meaning of Human Existence, which I blogged about in several posts ending here: how we perceive only the tiniest sliver of available light, or of other electromagnetic signals, some of which are perceived by other species. Evolution explains why.

Science has five principles: repeatability; economy; mensuration; heuristics; consilience, p53b. The method of science if firstly reductionism, (which is what offends so many critics), but in the service of synthesis and integration, with the goal of universal laws.

Wilson has some insightful description into the nature of how scientists work, and what their work means. A scientist has to be compulsive, working 80 hours a week (taking into account routine academic responsibilities, teaching classes, et al, before doing actual research), and how ultimately research, and original discovery, is all that matters. It doesn’t matter how a scientist makes a discovery — in this sense it is an art form — it only matters that the claim is true and can be validated.

Then there is the question of whether scientists close in on an ultimate, objective, reality. Wilson describes the philosophies of positivism, in Europe, then pragmatism, in America, with the combination of logical positivism (p61-62), culminated in a 1939 conference at Harvard. Mathematics, they understood, is tautological: given premises, you can conclude anything. p63.2: “Pure mathematics is the science of all conceivable worlds, a logically closed system yet infinite in all directions allowed by starting premises.” (I perceive a SFnal element here.)

Logical positivism halted, because they could not agree on basic premises about fact v. concept, theory v. speculation. Wilson states:

Its failure, or put more generously, its shortcoming, was caused by ignorance of how the brain works. That in my opinion is the whole story.

And so what I realize in reading this almost 20-year-old book is that a couple key issues I’ve come to understand only recently are not in fact all that new. Wilson identifies two key points: that the mind was built for survival, and the key to perceiving reality is to take into account the biases of how the human mind was built for survival, not perception of reality.

Wilson returned to the themes in this book not only in The Meaning of Human Existence, in 2014, but also in The Social Conquest of Earth, in 2012, which I have but have not yet read. And several key themes in this current book echo issues in his earlier foundational books On Human Nature (1978) and Promethean Fire (1983), which I read back then, and has informed my thinking ever since.