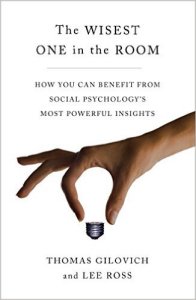 The second half of Thomas Gilovich’s and Lee Ross’ new book THE WISEST ONE IN THE ROOM: How You Can Benefit From Social Psychology’s Most Powerful Insights is four chapters under the heading “Wisdom Applied.”

Chapter 6, “The Happiest One in the Room”, begins with an anecdote about an athlete surviving an accident that crippled him, which he nevertheless came to regard as the *best thing* that ever happened to him, and goes on to discuss how, for example, people raising children are aware of the day to day toil of doing so, yet nevertheless consider it a worthy effort. Drawing on the earlier chapters, the authors point out that people who are happier don’t dwell on the past; they don’t denigrate rejected choices. And they’re less concerned about social comparison, i.e. worried about keeping up with the Joneses (so to speak; not their phrase).

So lessons to being happy: first, act like a happy person (see Ch4, “The Primacy of Behavior”). And more specifically,

And: pay attention to the young; spend money on others, not yourself. People are happier in nations with smaller gaps in wealth distribution.

Chapter 7, “Why We Don’t ‘Just Get Along'”, begins by considering the Middle East, and how to be a sophisticated consumer of news reports about such conflicts. There are psychological barriers to resolving conflicts, including considerations of ‘fairness’, the cognitive dissonance that results from compromise, and how some proposals of compromise became subject to ‘reactive devaluation’, p207, just because they’re proposed by the other side. [This is the state of American politics, since Obama, is my thought.]

Lessons: manage attributes: create a situation where a resolution *must* succeed. Offer a vision of a shared future resulting from a conflict resolution. Each side must control spoilers. Don’t bother with people who are invested in the status quo of the conflict and who can’t ‘afford’ to change. And realize that a slight shift, from 49% to 51%, can radically alter behavior.

Chapters 8 and 9 consider specific problems. Chapter 8 is about academic performance in public school, from racial differences among athletics to stereotypes in classrooms. It’s largely about self-fulfilling expectations by teachers, but students also suffer from ‘stereotype threat’, that notion that since their type doesn’t usually do well, it instills self-doubt that they themselves can do well.

Lessons: it’s about being ‘psych-wise’, and the authors point out ideas that don’t involve liberal notions of addressing root causes (poverty) or conservative criticism of ‘throwing money’ at the problem.

Chapter 9 is about “An Even Tougher Problem for the World”, climate change, why people don’t seem to take it seriously, and what can be done.

The good news is that some techniques have been discovered to encourage positive behavior, e.g. ‘social proof’, the idea that reminding people that their *neighbors* are doing certain things, like saving energy, by displaying this information on their monthly bills.

The global issue is more difficult. People are given to short term priorities, swayed by special interest groups, which in turn are driven by money in politics from those who stand to lose; and in the same way, the myth that there is some controversy about the evidence of human-caused climate change.

We can understand why people have difficulty addressing the problem, if not so much about how to overcome their resistance. The time frame of the effects of climate change is too vast; most people don’t worry much about the future beyond perhaps the future of their grandchildren p252t. Changes to address it would need to be permanent. Worry about free-riders; the drop-in-the-bucket problem; the ‘noisy signal’ problem, i.e. that the consequences of the problem are not easy to notice.

Addressing it, short of some magical technical solution, will likely require a change of social norms:

Finally, the authors’ epilogue tells a moving story about how Nelson Mandela united South Africa through a rugby match – told in the film Invictus – by using all the 5 elements discussed in this book.