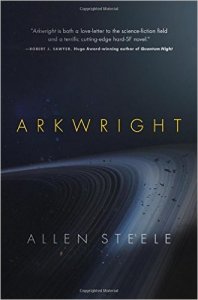 I’ve read three recent 2016 novels in the past couple weeks, and am reading them faster than I take the time to key in notes and post summaries on my blog. But I will! First up is the last one I just read, Allen Steele’s Arkwright. Some of its content first appeared as a series of novelettes over the past couple years in Asimov’s magazine, and because of that, though its themes relate to those of Kim Stanley Robinson’s Aurora (review here; follow-up thoughts here), I don’t think it can be considered a *response* to KSR; rather, in a sort of equivalent to steam-engine time, both authors are rethinking standard assumptions about interstellar travel and colonization, and coming up with different solutions.

Steele imagines a famous science fiction writer named Nathan Arkwright, whom he describes as among the ‘big four’ along with Asimov, Clarke, and Heinlein, and known for his ‘Galaxy Patrol’ series beginning around 1950. The novel opens with his death in 2006, and his granddaughter’s attendance at his funeral, where she, Kate Morressy, meets three of his long-time associates: his agent Margaret Krough, fellow author Harry Skinner, and fellow traveler George Hallahan, a physicist. Kate learns that her grandfather established a foundation to invest his savings into a venture to build a starship within 100 years.

And because of problems with generation starships, and hibernation etc., (p100, which echoes KSR’s thinking), Arkwright’s scheme is to sent a starship full of eggs and sperm, to be combined into a set of infants to be raised by robots once the starship reaches its destination.

The book follows generations of Arkwright’s descendants as his idea for a starship is funded, built, and launched — it’s called Galactique, and its destination, a planet around star Gleise 667C-e, is dubbed Eos. This is a “generation starship” novel in the sense that it is about a starship whose launch involves generations — not because generations of passangers live on the starship.

The highlights of the book are the first part and the last part. (The middle parts are charming, though they involve many idealistic romances and little discussion of consequences, e.g. once the foundation’s ‘beamer’ saves the planet from the destruction, wouldn’t they become world heroes? No mention.)

The first part is an imaginary description of the first World Science Fiction Convention, in 1939, where there actually was a dispute (documented in real nonfiction books by Asimov and Knight) between the ‘Futurians’, who believed science fiction could be a force for social progress, and the leaders of the convention, notably Sam Moskowitz, who thought the Futurians communists. In Steele’s version, Arkwright and his friends — Krough, Skinner, and Hallahan — sit in a diner across the street from the convention, and invent their own league, the ‘Legion of Tomorrow’.

And the last section, which shifts perspective to a culture of 4-legged beings with a rigid religious society run by Disciples who believe in the unchanging ‘Gal’ in the sky, lore about the ‘chosen’ who came from Erf to Eos, and belief in the afterlife. This section completes the novel in a way that invokes the classic science fictional trope of the conceptual breakthrough, in this case, ‘everything you’ve been taught is wrong’, done here effectively and dramatically.

If I were to quibble about this book, it would be about the slightly too-easy dramatics of the middle sections, the generations of romances, and the predictable interference by religious zealots. But overall, I think this is a worthy epic that updates and reimagines science fiction’s ‘faith’ in the future in which humanity will expand beyond the physical scope of our planet, and the idea that human ‘faith’ in ancient stories can give way to acknowledgement and understanding of reality. This is what science fiction is all about.