I Can Do Anything: Mark Haddon’s THE CURIOUS INCIDENT OF THE DOG IN THE NIGHT-TIME 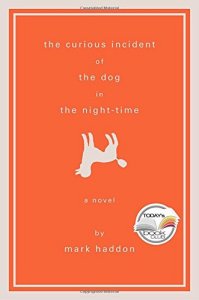 Last week I posted a look back at 20 Years of Locus Online and, having asked my lead contributors over the years for their best or exceptional posts, revisited an 11-year-old essay by film reviewer Gary Westfahl, Homo aspergerus: Evolution Stumbles Forward, in which he identifies his self-diagnosis of Asperger’s Syndrome, and defends the syndrome as a potential evolutionary advance.

I’ll reconsider his essay more closely at a later date, but it inspired me to check out some online autism tests, and to reread the classic novel by Mark Haddon, published in 2003, which is told from the point of view of an autistic 15-year-old boy (though the text of the novel never uses that term, nor ‘Asperger’s’), in a town in England.

The novel starts as a mystery story (the title is an obvious quote from Sherlock Holmes) in which the narrator, Christopher, sees a dead dog late at night on a neighbor’s lawn, dead from a garden fork stabbed through its body. His reaction is to walk over to the dog, pick it up, and hug it. When he’s discovered by the dog’s owner, and then the police, he’s overwhelmed by too many questions and strikes out at the policeman. And is arrested.

His father rescues him, and the narrative proceeds to daily life, as Christopher’s attends a school for students with special needs, and pursues his sincere effort to investigate the dog’s death (by talking to neighbors and making deductions), and his discovery (spoiler) that his absent mother is not dead, as his father had told him. He then sets off on a quest to find his mother, in London — a quest which, considering his aversion to public spaces and unfamiliar circumstances, is surely as harrowing as any hero’s quest.

There are various questionnaires on the interwebs for autism diagnosis, but most of them rely on the same 50 question test (e.g.). I took a couple of these last week, thinking about some characteristics I might share with Gary Westfahl — at what point do a few personality quirks become a syndrome? — and then saw how Haddon’s novel illustrated many of those characteristics.

So here are some personality quirks exhibited by Christopher, divided into two groups…

Will follow up with how these two lists relate to other topics.

This entry was posted in Book Notes, MInd, Personal history. Bookmark the permalink.