Tim Crane, THE MEANING OF BELIEF 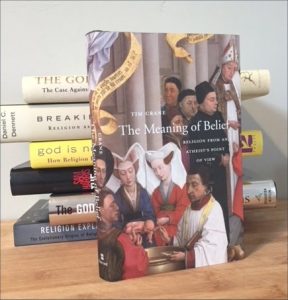 Subtitled: Religion from an Atheist’s Point of View

This is a small volume that appeared in 2017 and was well-reviewed in the New York Times. The author is a philosopher, and as the subtitle indicates an atheist (he denies the existence of a transcendental realm, and therefore God and an afterlife), and not a humanist (on Peter Singer’s grounds that other beings than humans might deserve moral consideration).

His thesis is that the conceptions of the “new atheist” authors – Sam Harris, Richard Dawkins, Daniel Dennett, Christopher Hitchens, and later A.C. Grayling, who published books beginning in 2003 challenging religious beliefs and practices, on various grounds – of religion as being defined by cosmological, supernatural beliefs – God, an afterlife – as too limiting. What makes religion endure is more than that, which is why arguments to counter the supposed proofs of God make no difference to the vast majority of humanity who are believers.

Religion, Crane says, has four elements: it’s systematic, it’s practical, it’s an attempt to find meaning, and it appeals to the transcendent. The very idea of religion, or the supernatural, is a relatively recent concept – earlier cultures made no distinction between these ideas and their absence. [An effect of science, and the Enlightenment.]

The most interesting section of the book for me is chapter 3, discussing how religion is as much about identification as about supernatural claims. It’s about belonging to a group of shared believers, it’s accumulated culture wisdom about how to live, it’s part of one’s identity, like being part of a family or a nation, something one can’t necessarily renounce. He discusses the idea of sacrament, of the sacred vs. the profane, and how people attribute to objects access to things that don’t have to exist.

Now all this strikes me as perfectly obvious, but Crane many times claims that the various atheistic authors mentioned above ignore these points. Which might be true; I’d need to check. He goes on to challenge their identification of religion with much of the violence in the world – conflicts between Sunnis and Shiites, Pakistanis and Indians – claiming instead that such violence has many other causes, with religion being only an obvious distinction between opposing groups. Perhaps so.

And so I acknowledge many of Crane’s points. I’ve said many times that I’m sure people are not religious because they find the claims of a (micromanaging) God or an (eternally boring) afterlife the least bit plausible; they identify with a religion because their family or friends do, and their shared religion forms a social bond, a way of defining a community, or more cynically defining their in-group against all the out-groups. No one ever sits down to study all the religions and comes to a conclusion about which one is true on the basis of any kind of rational analysis, or evidence from the real world – because there is none. Religions represent social and tribal history; they are arbitrary cultural traits, like languages or cuisines, which don’t have any basis in empirical reality. (Unlike the accumulated discoveries of science…) They represent human psychological needs.

Yet Crane equivocates. He addresses the idea that religion derives from human psychology’s willingness to accept “counter-intuitive beliefs” but dismisses the idea on abstruse grounds (p47-48); he hasn’t read Jesse Bering. For me that is still the key. Crane’s style is too often that of the lawyerly philosopher more concerned with parsing the meanings of words than in reaching a conclusion.

And at the end he discusses how the decline of religious belief is wishful thinking, that atheists need to accept the reality of religion, even if such tolerance does not entail approval, or respect. Fine, but he has no recommendations for this tolerance should be implemented, beyond following the rule of law, and not making fusses at social faux pas (he reads at times like an advice columnist).

And what he doesn’t do is address the evidence that many prosperous, well-educated countries – especially in Northern Europe – do in fact have far lower rates of religious faith than less prosperous and educated countries. (On this point the US is an outlier.) Or that scientists are far less likely to be religious than the general population – a point he mentions and denies, despite the much evidence I’ve seen.

It may be true that human nature is inescapable, as long as we remain the humans we are (pending taking control of our genetic identity and making modifications), and that human nature entails a propensity for some kind of belief in the supernatural, and with its attendant tribalism, the idea of religion.

But the evidence is not all in one direction. And here’s where this topic dovetails with the speculations of science fiction. Arthur C. Clarke, in particular, liked to imagine futures in which religion was obsolete and humanity had attained a peaceful maturity that understood that religion was an artifact of its primitive past. And indeed, the vast majority of science fiction – that imagines future civilizations, galactic empires – takes no account of religion. The few works that do, by Miller and Blish and a few others, are so few they are easily counted. Even fantasy, in a way the opposite of science fiction, more often assumes the supernatural perceptions about ghosts and elves, about simplistic worlds of good vs. evil, than they assume the reality of any particular religion. (Some early works by Zelazny are curious exceptions, but they explored various religions in Sfnal ways.)

This entry was posted in Atheism, Book Notes, Religion. Bookmark the permalink.