Frank: LIGHT OF THE STARS 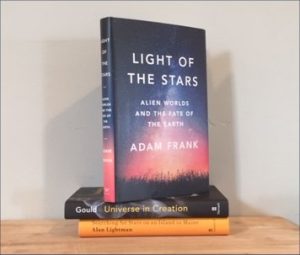 Adam Frank’s LIGHT OF THE STARS: Alien Worlds and the Fate of the Earth (Norton, 2018) asks, what can thinking about the prospect of alien civilizations tell us about our own fate? Currently our species’ story (by those of us paying attention, at least) is that humanity is wrecking the planet, having initiated the Anthropocene and triggered climate change that is wiping out thousands of species and threatening our own survival. Must it always be so? If other planets support intelligent life, did those civilizations come to some coevolution with their planets?

He reviews the history of our ideas about alien worlds, from Epicurus to Fermi, and then our knowledge of nearby planets, as our studies of Venus and Mars have influenced our understanding of our own Earthly climate. The ancient Earth couldn’t support our kind of life; there was a ‘great oxidation event’ in the Archean eon when life discovered how to use sunlight, and changed the atmosphere of the planet. And then the recent discoveries of thousands of planets around other stars — some 1800 planets discovered as of 2015. The famous Drake Equation was then rethought, to ask how many civilizations have *ever* existed — or the converse: what is the likelihood humans are alone in the universe? With estimates of 10 to the power of -22; that is, extremely extremely unlikely that there has never been another intelligent species in the universe.

We can then ask, how often can civilizations become sustainable, i.e. surviving their Anthropocenes? The author analyzed various energy sources and their impacts, then built models with different starting conditions. And found three classes of results (p196): the first, an abrupt die-off of the population as planetary temperature rises. Second, a ‘soft-landing’ in which the population plateaued and an equilibrium was reached with planetary temperature. And third, a complete collapse–extinction–with or without changing to different energy resources, because the planet had reached a point of no return and could not recover.

What would a sustainable civilization look like? For a civilization to ‘wake up’ and become self-aware of its destiny? In 1971 a conference that included Carl Sagan created the Kardashev Scale (https://en.wikipedia.org/wiki/Kardashev_scale), identifying three types of civilizations based on how much energy they use: the planet’s, the sun’s, or the galaxy’s. The second type embodies the notion of the Dyson sphere, and the first is reflected in naive SF visions of planets turned into vast cities – Asimov’s Trantor; Star Wars. These did not understand that civilizations are part of a planet’s history, and this history is about energy *transformations* — the heat from any energy use has to go somewhere. Thus the key to sustainability is developing a cooperative relationship with the planet. P214, “Planets are nature’s way of turning starlight into something interesting.” Transferring energy is the domain of thermodynamics, and this science says there is always some waste. The components of planets – from rock balls to those with atmospheres, etc. — are ways of transferring energy, 216b.

Author and collaborators propose a different classification of planets.

We are now part way between class 4 and class 5. Vernadsky had the idea of a ‘noosphere’, a shell of thought surrounding the planet; this is what a class 5 planet would be.

An essential lesson: planets are the engines of innovation. They are the result of physical laws; no teleology is involved. But when a civilization triggers its Anthropocene, a new age ensues: the completion of Gaia, worlds where the planet as a whole has an evolutionary direction, a goal; an ‘agency-dominated’ biosphere.

And so the new human story must be our understanding that we are not the first species to have changed Earth’s climate. Right now humanity is a kind of cosmic teenager; we must gain the astrobiological perspective to face the Anthropocene. It’s not that we’re at fault for creating climate change; we need to understand that, of course, our civilization is changing the climate, that’s what planet-spanning civilizations do. Yet we must realize that our effect on the planet does not guarantee our own existence, or what the planet will be in 1000 or 10,000 years from now.

I recommend this book as doing a nice job of summarizing and integrating material, much already familiar, in its first half; and then for revealing some interesting new analyses of potential futures in its second. Its bottom line is that the ‘cosmic perspective’ of science — and of science fiction — will be necessary to manage our future, lest we stumble into that future without thinking (as our current political leaders would have us do) and risk extinction. (Not the demolition of the planet; it will survive.)