In scouts you earn lots of awards, merit badges and rank badges and patches for every significant scouting event. So many that your scout uniform shirt, and even the merit badge sash, had no room for all of them. So we had, what were they called? Patch jackets, I think. They were a thing with the Boy Scout troop in Illinois. Mine was orange felt (now a bit moth-eaten, as the photo shows), and every time I got a new patch, my mother would dutifully sew it onto my jacket. Here’s the front. 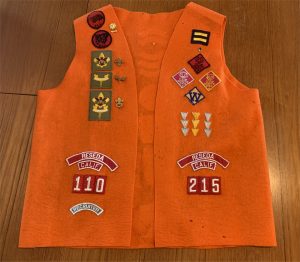 The right side in the photo (left side of the vest) shows cub scout badges. I was in Pack 215 in Reseda, California. Looking at this, I now recall that, even though I entered cub scouting later than I could have, my father had me retroactively earn the earlier badges for Wolf and Bear; Lion and Webelos I earned on schedule. I don’t remember what the silver and gold arrowheads were for.

In boy scouts I was in Troop 110 also in Reseda. I earned Second Class, First Class, and Life. 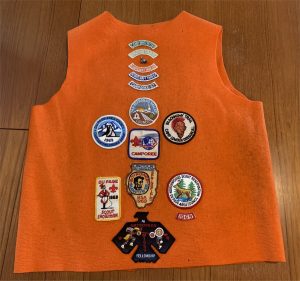 Most of the oddly shaped patches at the bottom are from scouting in Illinois — Du Page Area Council. The Blackhawk Trail, I think, was the site of that 20-mile hike. The center round patch shows San Fernando Valley Council. The semi-circular patches at the top are for Camp Whitsett, a camporee (that was the all-day event) and three scoutcraft fairs (I don’t remember what they were).

And there’s a bunch of loose patches that never made it on to the jacket. 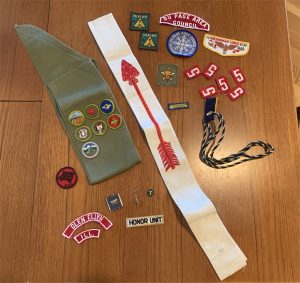 The green sash is the standard one for merit badges. I only earned a few–astronomy and stamp collecting of course; first aid; camping? Not sure what they all are.

The white sash with the arrow is for being selected for the Order of the Arrow. The blue and yellow shoulder tassel was, I think, for being a “den chief,” a boy scout who would attend cub scout meetings and serve as a role model. I was a role model, for younger boys.