This is a nice companion book to Pohl’s novel GATEWAY, because one of the five stories here is a prelude that novel. That story and three of the others were all published in various magazines in 1972; the fifth was published two years earlier. These were the first signs that Pohl was rebooting himself from steady editor and occasional writer, to major writer. 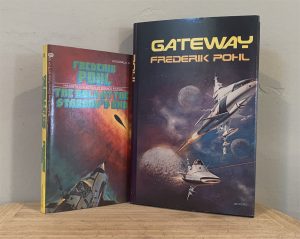 The title story, “The Gold at the Starbow’s End,” is one of those science fiction stories that speculates what humans might do should they become very smart. There are two alternating narratives, six chapters in each, over the 70-page story. The primary narrative, told in messenges being recorded for back home, describes the 8 astronauts of the starship Constitution, the first starship, on its way to the newly discovered planet of Alpha Centauri. It’s a 10-year trip, and they will be awake the whole time, so they occupy themselves with abstruse mathematical problems…

The second narrative is set in Washington DC, where Dr. Dieter von Knefhausen, the mastermind behind the mission, is summoned to the White House to address Russian claims that the planet around Alpha Centauri cannot exist. Dr vK initially insists the mission is valid, but then — spoiler!– is forced to admit the truth: that he sent 8 hand-picked astronauts on a 10 year trip to a planet that doesn’t exist. Why? It’s not a fraud, exactly, but camouflage. The real reason is the war against ignorance; these 8 brilliant people will have nothing to do for years but work their minds.

Meanwhile, strange and amazing things do seem to be happened aboard the starship. One of them proves [the still unproven] Goldbach’s conjecture. They observe the “starbow” effects of light dilation as they get close to the speed of light. They investigate unlikely subjects like acupuncture and the I Ching (when he hears this, Dr. vK gets livid). They Godelize things; they modify their bodies; their language becomes clipped, more efficient; they modify their drive; they have children.

On Earth things get worse with civil unrest and climate change. The US falls apart, a new president takes over in a besieged White House threatened by flood, and Dr vK is jailed, writing his memories. Then a new message comes in from the astronauts…

(I won’t reveal the finale, except to say the mission succeeds beyond Dr vK’s wildest expectations, and in an unexpected way.)

This is a dazzling story, even if it’s not really plausible. Isolation creates supermen? Then why not just isolate them in Antarctica? But it’s a good illustration of how abstruse topics can be understood by some, and are impenetrable to others. The story reflects the civic turmoil of its time. And it’s a bit cheeky of Pohl to suggest that things like I Ching and hexagrams are valid ideas that lead to great new truths.

Interesting aside: one of the astronauts reports, page 48:

I think it was Stanley Weinbaum that said that from three facts a truly superior mind should be able to deduce the whole universe. … We are so far from being from being truly superior minds by those standards, or even by our own. Yet we have a much larger number of facts to work with than three, or even three thousand, and so we have deduced a good deal.

There are three short stories in the middle of the book. “Sad Solarian Screenwriter Sam” is a mordant look at how the human race, we’re told, has been condemned to extinction by a superior alien race on the basis of close examination of just one man, a slick wheeler-dealer screenwriter whose latest project is to parley the discovery of actual Martians into a rip-off of Edgar Rice Burroughs’ Barsoom stories. The ironic sting is the aliens report their decision at the speed of light, so the execution action won’t occur until 64,000 AD.

“Call Me Million” is short and powerful, rather like Pohl’s very famous 1966 “Day Million,” though this one isn’t as crisp and is more a horror story than a futuristic satire. Here a man drafted to Vietnam discovers he has the power to “eat” another person’s soul, absorbing it, causing the other person to die. He returns to life and travels the globe, turning people into zombies and living off their spoils, until… he meets another like him.

“Shaffery Among the Immortals” is also mordant, telling of a sad-sack scientist who dreams of making some Einstein-class discovery. Instead he works at a minor observatory in the Lesser Antilles that’s run by a gambling syndicate. He’s pressured to appeal to NASA for a project this observatory can’t handle, and during a board meeting with his Vegas bosses he becomes ill, of a condition that quickly spreads and… his name becomes world-renowned in a way he never intended.

The final story is that prelude (not prequel; it was written first) to GATEWAY, “The Merchants of Venus.” The story is set on Venus, where humans have settled inside a huge cavern left by now-disappeared aliens called Heechee some 250,000 years ago. The narrator, Audee Walthers, is an airbody driver, making money off tourists from Earth. The tourist trade is irregular, and he’s desperate for a client to earn money for new kidney, when he meets wealthy tourist Bruce Cochenour and his girlfriend Dorothea. They set off “prospecting,” Audee leading them to unexplored tunnels in hopes of finding new Heechee artefacts and making fortunes in finder’s fees.

Plot complications ensue. They find an empty Heechee tunnel right away, then nothing for another week of tries. Audee is tipped off that his client is actually broke, playing some long game; their meeting wasn’t chance. They agree to one more dig, coming up against their supply deadline, when client breaks his leg. They persist with Audee depending on client’s timely return in the airbody…until Audee realizes he’s being set up to die. And what he does.

This story is less conceptual than “Starbow” but it’s brilliantly plotting with one surprise or setback after another, story elements that all mesh and explain themselves, and with a satisfyingly just ending. As especially in GATEWAY there are character elements that reflect the progressive era of the 1970s; here, a café owner who, matter-of-factly, is part of an extended family of two men and three wives.

Slight spoiler: ironically, the finale of the story doesn’t reveal what Audee found in that final dig, except that his finder’s fee is enough to provide him with that new liver. In GATEWAY, we learn that the first alien pod, leading the Gateway asteroid in the first place, was found in the Venus caves. So that must be what Audee found.