Summary and comments about this 2011 essay and 2013 book. With an aside about my belief in Santa Claus. 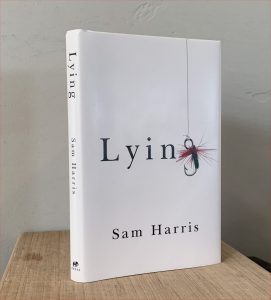 I mentioned this book in my discussion about the recent book by Shankar Vedantam, USEFUL DELUSIONS, whose thesis is about how our brains regularly deceive themselves, and how such self-deception can be helpful and functional.

In contrast is this short Sam Harris book, LYING, originally published as an e-book essay in 2011, then expanded with a couple appendices and published as a hardcover in 2013.

Harris’ provocative thesis is that it’s *always* better to tell the truth – even if that means telling it “slant” so you don’t reveal things that might lead to bad consequences, or in some cases to avoid saying either the truth or any kind of lie.

Of course one’s immediate reaction is to think of obvious circumstances where it might be best to tell a lie – the classic one is about when Nazi soldiers come to the house where Anne Frank is hiding – and so to watch Harris handle these questions one by one, and make a plausible, if not necessarily convincing, case for his thesis.

The first appendix is a conversation with Ronald A. Howard, who taught the Stanford seminar that Harris took and which inspired this book. The second is a Q&A with Harris answering reader responses to the original essay.

The most common question Harris got was about kids and Santa Claus. I’ll quote most of his reply:

Strangely, this is the most common questions I’ve received from readers. In fact, i heard from several who seemed to expect it would be, and who wrote to tell me how disturbed they had been when they learned that their parents had lied to them every Christmas. I also heard from readers whose parents told the truth about Santa simply because they didn’t want the inevitable unraveling of the Christmas myth to cast any doubt on the divinity of Jesus Christ. I suppose some ironies are harder to detect than others.

I don’t remember whether I ever believed in Santa, but I was never tempted to tell my daughter that he was real. Christmas must be marginally more exciting for children who are duped about Santa–but something similar could be said of many phenomena about which no one is tempted to lie. Why not insist that dragons, mermaids, fairies, and Superman actually exist? Why not present the work of Tolkien and Rowling as history?

The real truth–which everyone knows 364 days of the year–is that fiction can be both meaningful and fun. Children have fantasy lives so rich and combustible that rigging them with lies is like putting a propeller on a rocket. And is the last child in class who still believes in Santa really grateful to have his first lesson in epistemology meted out by his fellow six-year-olds?

If you deceive your children about Santa, you may give them a more thrilling experience of Christmas. What you probably won’t give them, however, is the sense that you would not and could not lie to them about anything else.

///
Personal aside: The Easter Bunny and Santa Claus fantasies were part of my childhood, as they were with everyone we knew, and in retrospect, I was a bit slow on the uptake. I distinctly remember one night — I think it was that year 1959 when we took the train trip from LA to Cambridge IL at Christmas-time — when I lay upstairs, very late Christmas Eve night, I was sure I heard the sounds of footsteps below, sure it must be Santa.

My parents’ tradition was to wrap gifts from them to us kids, but to have gifts from “Santa Claus” appear under the tree on Christmas Morning, unwrapped. That’s how we could tell.

I must have been 7 or 8 years old when one day my mother frankly discussed what to get Sue, my younger sister by 4 years, from Santa. Something struck me within. You mean–?? I didn’t say it. She assumed I’d figured it out by then. I hadn’t. What does this say about my personality? And how I tried to overcome this?

The main problem as I see with Harris’ thesis is that one would have to be very quick-witted to come up with some of truthful but evasive statements the author suggests to avoid even white lies. Most people probably can’t do this, and for most people it’s simply easier to be polite, or to outright lie. And that *everyone* understands these social white lies. No one expects others to tell the absolute honest truth; even families wouldn’t survive such a policy. And it’s the essence of public etiquette and polite social discourse. Be brutally honest and the knives and swords break out. (Or guns.) As happens when some character wants to provoke a confrontation.

My secondary reaction is the evolutionary one: humans, and for that matter many animals, have evolved to be skilled at deceiving one another. Then surely there must be some advantage to doing so, rather than by being brutally honest. This recalls the Vedantam book, which argues that certain deceptions are part of human nature, largely because they ‘grease the wheels’ of human interaction. Some little lies simply don’t matter; the bigger ones are strategies of group selection.

Yet my final thought is that perhaps Harris’ suggestion is precisely about overcoming this evolutionary survival tendency, because human society has become mature enough to tolerate honesty and value reality. But then I look at the news.

This entry was posted in Book Notes, Evolution, Philosophy. Bookmark the permalink.