This is one of those books I heard about when it was published (via a PW review), but passed on at the time. (As I pass on 80% of books I hear about that I think I might like reading, as previously discussed.) The review was mixed but invoked Yuval Noah Harari in comparison. Still. Then for some reason I heard about it again late last year and ordered it from Amazon during the holidays.

I have a mixed reaction to the book myself. For much of it the author expounds at length on topics that are straightforward, even obvious, as if struggling to pad out to book length a topic that could have been covered in a medium-length essay. And yet he does introduce some provocative topics, both about his ideas about human invention, but also about how autism relates to the unusual skills of inventors, and by extension how certain kinds of human progress have been driven by a small minority of people with obsessive, “pattern seeking” skills that most of society finds peculiar at best, distasteful at worst. 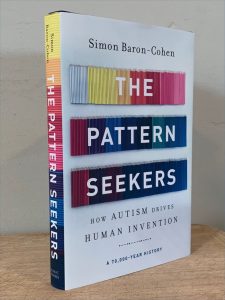 UK title: THE PATTERN SEEKERS: A New Theory of Human Invention. Which sounds rather dull; the American publisher made it more provocative, or, decided to appeal to the panic and alarm that still surrounds autism in the US.

Here’s a summary of his major themes. Then I offer some thoughts of my own.

First of all, the author does not explicitly address the issue I’ve noticed for years about whether it’s more proper to say “is autistic” rather than “has autism,” or vice versa. Yet he answers it in practice: he always uses the former. I agree. Autism is not a disease, it’s a condition, like being athletic or being smart. You wouldn’t describe you child as “my son who has smartness” as if smartness were some condition that might be changed. I understand that the parents of autistic children who are dysfunctional want to think it is a condition that might be cured, or avoided – thus the persistence of that discredited study that linked vaccines to autism. Just avoid vaccines, these people think, wrongly. People always search for *reasons* even when none exist; each child is a random genetic shuffle of traits, only to a degree influenced by their parents.

Second, I recall the obsessive ordering of the boy in Mark Haddon’s novel THE CURIOUS CASE OF THE DOG IN THE NIGHT-TIME, blogged about here. With lists of traits of his that I sympathize with, and those that I don’t.

This fits with the author’s thesis here in that boy’s straightforward understanding of concepts (like evolution) that “ordinary” people don’t see or reject. Is this kind of literalism the contrast of the subjective, impressionistic view of the world by those “ordinary” people? Who are, as it happens, more subject to pseudo-science and religion and the rejection of any science that challenges “intuitive” (empathetic) understanding?

It’s obvious of course that *most* people are not inventors, or even creative in any significant way. The theme of the book reflects my observations about how science and technology have created the modern world, despite the portion of the population that doesn’t “believe” in it, or rejects scientific concepts that conflict with their comforting fables.

Following that line of thought… I wonder if these studies of the autistic might lead to observations about religion, or even sexuality. Nothing like that in this book.

When I finished this book 10 days ago I wrote some notes, seemingly profound at the time, about how we could identify three kinds of knowledge – human intuitive knowledge; objective knowledge about the universe; and the knowledge that humans (via stories, including science fiction) filter from the latter to the former – that I think might apply to the structure of my theoretical book. And how autism fits. It’s a kind of literal-mindedness, repeated testing that moves unfiltered objective knowledge into human usable knowledge, and has been an unrecognized key to the species’ success. The autistic are less likely to hear gods in the thunder, see Maria in a tortilla, and so on; the difference between them and “ordinary” people is analogous to the difference between Type I and Type II errors, between understanding reality and living with myths. Will keep thinking about this.

I am probably giving myself too much credit here. I’m usually comfortable navigating social situations, but I suspect other people don’t think so. Twice in my life I’ve been associated with social groups who, it seemed to me, abruptly shunned me, as if I had committed some unforgivable faux pas. The first was a ski group in the 1990s; the second was my associates at Locus Magazine, who were friendly enough in the 1990s and 2000s but then who, after I was dismissed from running the website, barely had the time of day for me (e.g. when we were attending a convention) any more.