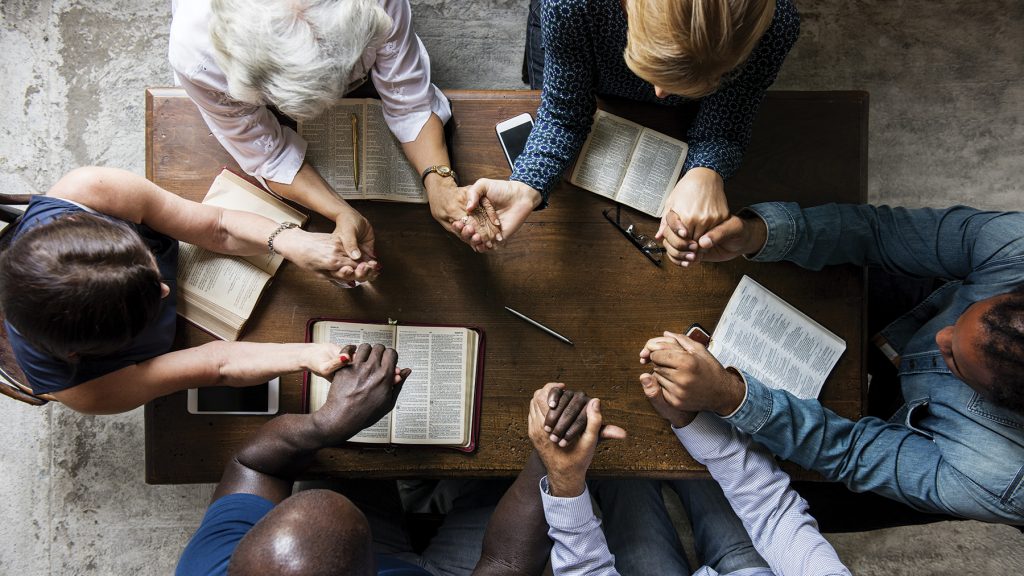 About a month ago I put together a post in part about how belief in prayer reflects a fundamental inability to understand cause and effect in the real, actual, physical world; that post is here.

I had a current link at hand, what prompted the topic, but I couldn’t find an older link about a more recent and thorough study about so-called “intercessory prayer.” Now I’ve found that link; it’s an article that apparently cycles on and off the homepage of Free Inquiry (https://secularhumanism.org/) as a feature article, and earlier today it cycled back on.

This is worth reviewing closely because it’s an excellent example about how to actually test a religious claim, and about how the faithful will find ways to dismiss the evidence when it conflicts with their beliefs. Again, somehow the evidence of cause and effect (or non effect) that they would apply to other situations doesn’t apply when it comes to their own “sincerely held religious beliefs.” Apparently sincerity trumps evidence and rationality.

In 1982, a young cardiologist at the San Francisco General Medical Center named Randolph Byrd had a brilliant insight that would motivate several important investigations of prayer during the following two decades. He realized that the standard research paradigm known as the double-blind randomized clinical trial could be used to test the efficacy of intercessory prayer with medical patients in the hospital setting.

Dr. Byrd, who identified as a born-again Christian, believed that he could put (heretofore faith-based) prayer on a solid scientific foundation by implementing rigorous study procedures within an experimental framework. In his ground-breaking investigation, four hundred cardiac patients were randomly assigned to prayed-for and not-prayed-for conditions. The prayers offered by Christian intercessors requested a quick recovery with minimal complications.

The distinction about “intercessory” prayer is as opposed to two other types, personal and interpersonal. In intercessory prayer the subject does not know he is being prayed for, and who is not present with those praying. It’s the only one of the three subject to objective study.

Byrd and his assistants were all believers. They found what they were looking for, unsurprisingly. Until someone noticed they hadn’t done the “double-blind” test properly. (“This was the flaw in Byrd’s project—the study coordinator did know which patients were receiving prayers at the time she interacted with them.”) And so four replication studies were done, properly, and found no effect of intercessory prayer.

The subjects were cardiac patients, some of whom were prayed for, others who were not. The results showed the percentage who died was virtually the same across both groups (though somewhat different, from 3% to 9%, among the several studies). There is a chart a third of a way down the linked article: 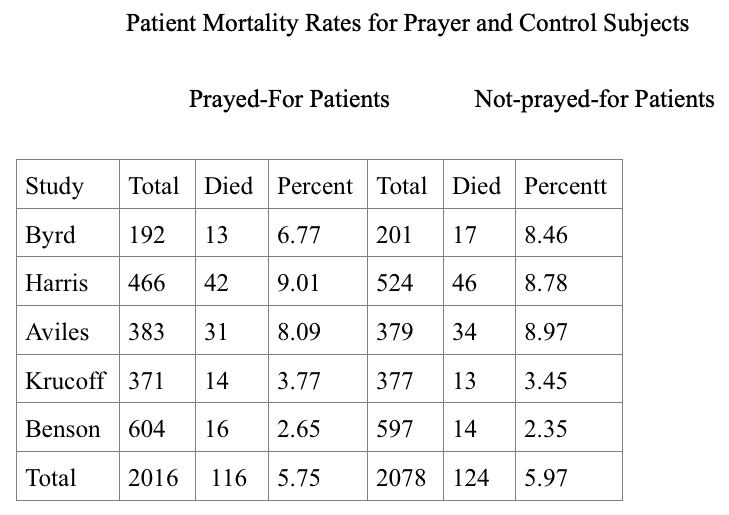 The writer, Bolton, takes this evidence at face value, as a scientist would.

It is apparent that the Judeo-Christian god disregards fervent prayers for recovery just as often as favorable outcomes occur. In other words, restoration to good health is a matter of competent medical care and good luck. Intercessory prayer does not improve the probability of survival. Why would God allow 116 patients in the five study samples who were recipients of Christian prayer to die, when Jesus promised, “If you ask anything in my name, I will do it” (John 14:10–14)?

These are all of course abdications of rational thought.

All six of these rationalizations entail the invocation of theological dogma in an attempt to explain away the irrefutable evidence that the Judeo-Christian god does not answer prayer. It is important to note that these worthless explanations from the dumbfounded religious community only emerged after the negative results of the clinical trials were thoroughly replicated. Two legitimate questions that prayer advocates should have addressed are:

What does this all mean? No similar studies have been done in the past decade.

Is this because Christians have accepted the verdict of science and dismissed the value of intercessory prayer? No. When science fails to support faith, it is science that is rejected, not faith. [ references cited ] The numerous excuses proffered by Christian believers summarized above amply testify to this pervasive distrust of science.

What sustains belief in the efficacy of intercessory prayer in the face of overwhelming negative scientific evidence? The simple fact is that Christians are much more likely to absorb uncritically the claims of anecdotal accounts in newspapers, on television, and in personal testimonials, rather than to accept the replicated results of randomized clinical trials.

And that’s why they’re prone to belief in conspiracy theories, e.g. QAnon. This is the essence of motivated thinking and confirmation bias: start with your belief, look for evidence, take credit for the hits, and ignore the misses.

Regardless of the nature of the tragedy – whether lost or abducted children, patients with serious illnesses, or victims of natural disasters – the reaction is always the same. Family, friends, and strangers pray for a happy outcome. When the prayed-for individual survives, all credit is given to God and the power of prayer is acclaimed. But when the prayed-for person dies, God is never blamed for the negative outcome. Typical responses are “God has called him home” and “She has gone to be with Jesus.” The infallibility of prayer is an article of faith that cannot be questioned.

In plain language, the traditional Christian framework does not permit prayer to fail.

Believers are quick to cite cases where prayer is associated with positive results, while they steadfastly disregard those circumstances where prayer is followed by unfavorable outcomes. It is this selective attention to everyday events that helps sustain faith in the power of prayer.

Ironically, there are people who roll their eyes when certain scientific studies produce results they think are obvious. You had to conduct a study to realize *that*? Of course, these studies are done because some things people think are obviously true are not, in fact, actually true. They only seem true given the human panoply of cognitive biases and the need of individuals to conform to tribal/community beliefs; they are only true within certain narrow contexts. Overcoming these biases and thinking independently are very hard work; scientists do this ideally, but for the most of the rest of us, there’s no need. The vast majority of humanity lives in one or another fantasy reality that services the survivability of the community/tribe/nation, and if it does that, that’s all that matters.

Of course, when I see studies about the efficacy of prayer and see the negative conclusions, I roll my eyes and think, you had to do a study to confirm *that*? But I would not reject positive findings out of hand. I’d want to see additional studies that confirmed the result.

And if the result stood, I would be mind-boggled. Really, the Judeo-Christian god? What about all the other creeds and their gods? Why is it this god doesn’t answer *all* prayers, especially the ones about bringing a person back from the dead, or restoring a severed limb? The only prayers that *seem* to be answered are about things that might easily have happened all by themselves. And on and on.

This entry was posted in Religion, Science. Bookmark the permalink.