Randy Olson, HOUSTON, WE HAVE A NARRATIVE 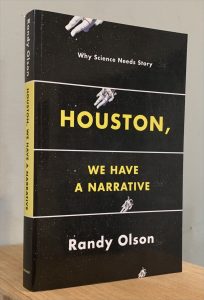 This is an interesting book that I’m disappointed by only because it’s not the book I wanted to read. That is, not the author’s fault. An interesting, useful, book nonetheless.

Olson’s book is about narrative, and science — but only science in terms of writing paper abstracts and press releases. About telling the ‘story’ of new scientific results.

Almost more interesting than the book itself is the Randy Olson‘s background. He was a tenured professor of marine biology until he went to Hollywood and changed careers, directing several documentaries (including Flock of Dodos about the evolution/intelligent design ‘debate’), before becoming a storytelling coach for industry, holder of workshops and writer of guide-book sequels to this one.

(The book that was closer to what I wanted to read was Jonathan Gottschall’s The Storytelling Animal (2012), which I reviewed here about two years ago. It’s all about how narrative is built into human nature, something many others have written about (e.g. Dave McRaney); but it’s not about science.)

Here, near the very end, is what I wanted to read about. How can science be understood, or perceived, given the human tendency toward the narrative bias?

This book is all about communicating scientific results to the public. What I want to read, or discover, is how science itself can be understood, *despite* the narrative bias. Everyone wants the world to make sense in terms of the narrative bias — cause and effect, reasons and consequences — even though the real world doesn’t seem to operate like that. Quantum mechanics; the origins of the universe; even now the naive folks who, able to see the world only to the horizon, extrapolate that personal experience into imagining the entire world must be as flat as what they see to the horizon.

This entry was posted in Book Notes, Narrative, Science. Bookmark the permalink.