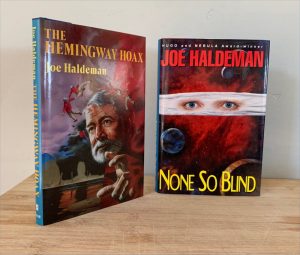 “The Hemingway Hoax,” by Joe Haldeman, first published in April 1990, is the third story in the big Gardner Dozois anthology being perused by the Facebook reading group I’m following. (See previous Sundays’ posts.)

Haldeman is a popular writer who, like William Gibson and no doubt other writers, remains most famous for his very first novel: THE FOREVER WAR (1975), a book that responds to Robert A. Heinlein’s equally-famous STARSHIP TROOPERS (1959) and which reflects Haldeman’s own experience in the Vietnam War. (Even though both Haldeman and Gibson went on to write arguably much better novels.) Haldeman’s war experience shows up in other of his works as well, including two of the stories covered here.

“The Hemingway Hoax” is unusual among Haldeman’s work for not being obviously science fiction, at least not at first. Initially it’s about, of all things, a famous historical incident concerning the writer Ernest Hemingway, in which early in his career an entire bag of manuscripts went missing on a train trip with his wife. The bag never turned up, and the novels and stories in the bag were never found.

So our story begins, as Haldeman himself begins the story, with John Baird, a university professor and specialist in Hemingway, as he is approached in a Key West bar by a con man who, hearing the story of the lost manuscripts, wonders if they might be faked and passed off as real, to make lots of money. Baird dismisses the idea at first but then considers it intellectually. How would it be done? You’d have to find exactly the right typewriter, the kind of paper used back in the 1920s, and so on; and you’d have to be familiar enough with Hemingway’s themes and his early life to imagine what he might have written in those years before he became famous. Soon enough Baird goes to Boston for research, the con man begins an affair with Baird’s wife, and as backup the con man arranges to blackmail Baird via a dalliance with escort.

But something else is going on, in some higher plane of existence; Haldeman tips us to this on the fourth page of the story (as set in Dozois’ anthology). Extradimensional entities overseeing the timelines, or something. Some disturbance on the Hemingway plane, they notice. Keep an eye on things. Don’t let this Baird guy get out of hand.

For Baird things really start happening when – following a sip of absinthe – Ernest Hemingway appears in his train car, urging him to give this project up. There are zillions of universes, along with entities keeping them straight, Hemingway explains, and for interest in him, and his idea of American masculinity, to be revived now would have tragic political consequences. Hemingway produces a cane, touches it to Baird, and gives him a stroke.

But Baird wakes – perhaps in an adjacent universe. Meanwhile, we’re given to understand the higher plane entities don’t know what this Hemingway entity is up to, and can’t control him. So there are three sets of forces in conflict.

Now the *challenge* of this story – a reader impatient with multi-genre complexities might call it a flaw – is that it doesn’t go, or end up, where you thought it might. It’s not about hoaxing manuscripts. It’s not an alternate timeline story, exactly. There’s no simple explanation for the missing manuscripts, though an explanation of a sort is provided. Indeed, when I first reviewed this story in Locus Magazine (March 1990 issue), I concluded,

This read I’m a little more forgiving. There’s no conventional cause and effect here; the characters of Baird and Hemingway are somehow inextricably connected, one life bound up in the other. Do authors only live by virtue of critical attention? Or is this about a ghost Hemingway trying to preserve his legacy from a revisionist critic? Or perhaps this is overthinking it. Here’s a comment from Haldeman on Wikipedia: “It’s a horror novel tinged with ghastly humor, as the apparently insane ghost of Ernest Hemingway murders a helpless scholar over and over…”

And it did win both the Hugo and the Nebula.

(Aside: The book version of THE HEMINGWAY HOAX was published in June 1990, just two months after the cover date of issue of Asimov’s where the novella was published. Isfdb assumes the book was expanded from the novella, but I haven’t seen Haldeman say this anywhere; perhaps the novella was cut from the novel. Anyway, the novel has several extra short chapters, which I’ll indicate as 5+, 6+, 15+, 19+, 20+, and 21+, to indicate their positions following the numbered sections of the novella. These include details about setting up the typewriter, and later actions Lena (Baird’s wife) and Pansy (the escort) take against Castle (the con man). But the most substantial difference is in chapter 18, in which Pansy tells John much more about her past, before admitting that Castle has put her up to this encounter; and John tells something about his life after he came home from Vietnam. These sections are more graphically sexual than anything in the rest of the book (which might suggest they were cut for magazine publication, rather than added for the book).

Written at the request of Ben Bova’s for Analog’s July 1976 issue. And to match an existing work of cover art by Rick Sternbach showing a planet, a damaged spaceship, and the North America Nebula in backdrop. It won the Hugo and Locus awards and was a Nebula finalist.

In 1975 it’s discovered the sun is part of a double star system, and a few years later, that in fact the companion is a pair of black dwarfs, one matter, one anti-matter.

In 2075 scientists receive a signal from 61 Cygni, apparently from an intelligent civilization, and want to respond.

The story follows the scientists, who live in an L-5 space colony, and their frustration with the “Groundhogs” on Earth, where culture is becoming increasingly degenerate following the Breakup and People’s Revolution. This is illustrated, e.g., by newspaper articles that are bulleted sentences rather than prose, and that use terms like “upleft” and “upright” to refer to parts of the page; similarly “bacover”. So the scientists decide to revive Project Daedalus – the actual proposed idea of using H-bombs to propel a starship – and simply go to 61 Cygni themselves, using the material from those two black dwarfs as fuel for the bulk of the journey. But not to tell Earth until they’re on their way.

This is a snappy, black-humored story that takes a dim view of public support for science or exploration, or of the general public in general. The crux of the mission involves a technological problem that echoes that of Poul Anderson’s novel TAU ZERO, from 1970, though the outcome here is notably different. And further underscores Haldeman’s projection of the diminution of civilization on Earth.

This incorporates Haldeman’s Vietnam War experience as much as any story he ever wrote, I suspect. The narrator writes how 20 years before he was on “Graves” duty to retrieve dead bodies from the jungle, despite the dangers of being shot at by the enemy. We get details of how such bodies look and smell after days; how sometimes they are officers terminated by their own men. The key event concerns the finding of a native corpse, a Montagnard with filed teeth, whose soft body parts are already gone. The retrieval crew is ambushed, the major shot, the rest huddling through the night, until morning when they find the major’s body… with his insides already gone.

The story wraps swiftly with the narrator’s sleep troubles and a recurring dream that suggests a shocking supernatural explanation for what happened in the jungle. It’s saying quite a bit that, even after the grotesqueries of death in the jungle, the revelation from the dreams is the most shocking thing of all.

(But without giving anything away, wasn’t there an episode of the ‘70s TV series The Night Gallery that did something similar at the end?)

The story won a Nebula and tied for the World Fantasy Award; placed 3rd in the Locus Poll.

This won the Hugo and a Locus, not to mention a HOMer and the SF Chronicles poll, and was a Nebula finalist.

Even more so than “Tricentennial,” this is crisp and efficient as a story with a substantial theme could possibly be.

It’s about Cletus, a 13-year-old genius who’s black, short, and ugly, and Amy, who’s white, tall, and rich, and a musical prodigy on the violin despite being blind. “Why aren’t all blind people geniuses?” Cletus wonders as the story opens, and in the years after he and Amy meet and bond, he studies the brain, learning how skills are not located in particular areas, and how sometimes people who lose one skill develop compensating talents. Years later when the technology become available, he suggests removing Amy’s eyes to replace them with electronic implants, giving her limited sight. But he has ulterior motives. The success of the operation triggers (r)evolutionary consequences.

Even in such a brief story Haldeman paints Cletus and Amy vividly. The background about the brain’s structure, the way skills and knowledge are multitasked throughout the brain, shows an astute understanding of that topic, even in the 1990s. And Haldeman, in the afterword to this story in his collection NONE SO BLIND (1996), confirms the impression that the story was modeled after what he says is his own favorite SF story, Frederik Pohl’s “Day Million.”